Matt N said:
I can't read it either @CrashCoaster; what does it say?
Click to expand...

It claims that the issues Wicker Man is having means it won't be reopening until August.

CSLKennyNI said:
It claims that the issues Wicker Man is having means it won't be reopening until August.
Click to expand...

CSLKennyNI said:
It claims that the issues Wicker Man is having means it won't be reopening until August.
Click to expand...

Well that seems to be a bust, as Wickerman is up and running again just in time for the weekend.

Really poor day out at Towers today. Wicker Man was closed all day for winter maintenance, Smiler opened at about 12 then shut for the day 2 hours later, one train all day on Rita with a queue way past the tunnel. Rides were breaking down left right and centre which at Towers is especially frustrating because it takes 15 minutes to walk between areas only to have to turn back because nothing is open at the place you just arrived.

Blade and Enterprise were closed all day too which meant there were no proper flat rides, the only things worth going on as a group of adults were the six (ish) big coasters, Hex, Duel and the aquarium. That was it. I went in with low expectations as it's so early in the season but I still came away disappointed, this just didn't feel worth the long drive and booking a days annual leave.

Nice to get a coaster fix after the long and gruelling winter though. Plus Oblivion was pumping out mist like I hadn't seen in years, looked great. 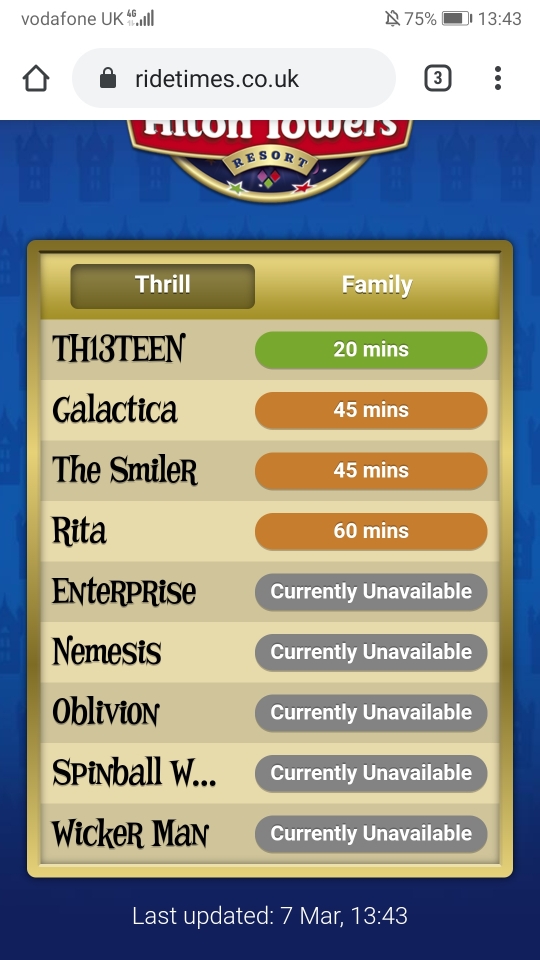 ^A few of us are going tomorrow, can't wait to experience the chaos for myself.

Howie said:
^A few of us are going tomorrow, can't wait to experience the chaos for myself.

I've seen on Towers' Twitter that Wicker Man will be closed tomorrow so my advice is to do Rita as soon as you're through the turnstiles as it will probably be one train again. The park felt quiet today (not many people clogging the paths) so if there's better ride availability the queues shouldn't be too bad.

But most likely it will be a mess of a day again!

Thanks man, good tip.
Will report back tomorrow with my findings.

Beautiful random chainsaw art.
"Hey can you make some space for a digital screen here?"
-"Sure!"

I wanna know who signed that off, they need sacking

Shows how internally disjointed Merlin must be as this is what happens when there’s no communication between different departments.

At first this was my reaction too. What kind of dolt would think this was a good piece of craftsmanship?

But then it stuck me: nobody is that dumb. To think this is a job well done would require being too much of an oik to be trusted with power tools in the first place. Everyone involved must have understood that there's no way this would look good. Taking the existing sign, cutting a hole in it, sticking in a screen? Without even painting it? This was never a good idea. So why was it done like that?

I feel that question exposes the deeper problem: Somebody, on some pretty high level, simply didn't care.

Weather-proof digital screens like that must cost a fair bit of money. It wasn't installed on a whim, but must have been ordered because somebody saw a need for it. Said somebody must also have felt that the sign wouldn't need to be replaced, the screen could just be installed in the sign itself. After all, the sign is big and purple and has the ride logo on it, that's eye-catching in a way the screen couldn't be.

Whoever was tasked with executing this idea must have noticed how bad it would look. As I said, no oik big enough would be trusted with the power tools required to do the job in the first place. But it was done anyway, and done quite badly at that. Maybe there would have been some protesting back and forth, but in the end it was evidently signed off as being "good enough".

And that's what bothers me more than how bad it looks. The indifference required for it to end up like that is way worse than the shoddy handiwork. This could very well have been a rush job, the best they could do given the time and money - which means that something went very wrong on the level of allocating time and money for the job.

I mean, in the end it's just a sign. But it's also a very noticeable and crappy piece of work, and the park allows it to be shown that way. The sign is a symptom, if you will. It makes you wonder what other shortcuts have been taken that you don't notice. Hopefully, whoever works with preparation of food don't have that level of sloppiness. It's hard to tell, of course, but thanks to this it's pretty easy to suspect.

I'd guess with that sign that they're going to have the sign re-vinyl'ed in a way that will make sense with the screen.Or they'll replace the aluminium panel around the screen at a later date. A job being done by multiple people but not at the same time.

But yeah that looks bad haha.

This is the same park where I found razor blades on the floor in the Galactica queue, clearly had been used to trim the vinyl wrap in the queue tunnel and just left on the floor.

It’s clearly not a finished product...

Please tell me there’s nobody here who actually thinks it is?

My guess is that they threw the sign up for testing the digital communication system and screens ‘in place.’

Please tell me there’s nobody here who actually thinks it is?

My guess is that they threw the sign up for testing the digital communication system and screens ‘in place.’
Click to expand...

In which case I'd have just hung the screen on a bracket over the top of the sign, or put it on a stand separately. This is just a bodge, whichever way you spin it.

I have since come to learn that these signs were actually installed pre-lockdown, and there were a few like this.

Obviously lockdown could have had an effect on any future work that was due to take place, but it's not been a short-term thing

Let's be honest it's Leek Sign's that'll be doing the replacement and they have been ope a week or 2 now so, wouldn't be suprised at the shoddy work, look at Gruffalo's sign last year

VonRolland said:
Let's be honest it's Leek Sign's that'll be doing the replacement and they have been ope a week or 2 now so, wouldn't be suprised at the shoddy work, look at Gruffalo's sign last year
Click to expand...