Does this count as the worlds steepest drop?

Staff member
Administrator
Moderator
Social Media Team
What in the...?!

roomraider said:
Does this count as the worlds steepest drop?
Click to expand...

Still only halfway to the steepness of a Pretzel Loop on flying coasters. But pretty darn spectacular nonetheless! Shame there were nobody around to film it.

So I was looking for old footage of amusement parks and came across a video of Riverview Park in Chicago where the wooden coaster (which I assume is named Pippin going by RCDB) has enclosed trains(?).

Anyone know why that is? It looks like a monorail train on a coaster track from the footage. Quite bizarre.

Staff member
Moderator
Social Media Team
^ Looks like something I hack up in OpenRCT. ? Here's the timestamped shot of the video for folks (1:16)


My best guess would be having a coaster train that can comfortably ride in the elements? Theoretical, but highly impractical.

This video was shared earlier in the vintage coaster thread, but there's a turn on this side friction that felt so weird by today's standards; a rider can easily stick out an arm to touch the side track or supports, which does actually happen in the video! (At about 1:26)

IF you haven't seen the video in the quoted posts below then watch it... its amazing and gives some context


TilenB said:
So, there was this sketchy looking looping coaster operating in the Russian city of Penza. It was a prototype from the local company partially based on the Cool Runnings ride in Moscow's Gorky Park (by the looks of things, that was a Jungle Mouse). It was built in the second part of 1970s and operated till the late 90s. Then, it was SBNO for a few years, before finally being torn down in the early 2000s. What strikes me as weird is the cars. They looked sketchy as something and there are was no visible restrain system apart from perhaps a seatbelt (which isn't visible in any of the photos). 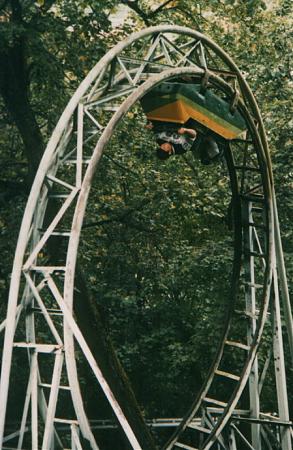 Sadly, those are all of the photos I could find. I do wonder how the whole layout must've looked like, the ride seems to be quite large.

TilenB posted about it a few pages back but this video is amazing.
Click to expand...

@TilenB this may interest you (Or you may have already seen it) but looking back over this old janky ride (That may have been called Tornado) I came across some more interesting tidbits.

It wasnt a short ride by any means.
The ride was developed by a guy called Artur Alexandrovich Miller who worked at the technical department of Mostotryad №20 (seems to be a trade union orginisation)
The patent for the ride also lists the owner of the park in Penza Ivan Dmitrievich Balalaev as an author.
It doesnt sound like they sold any others despite reported interest.

As for the patent here are some pages from said document.

The most interesting thing here is something i think was unique to this ride and I had completely missed on first viewing.
The coaster had two switch track sections which could be engaged to provide a different track layout that avoided the loop entirely therefore making it (arguably) more family friendly. I wonder how much (if ever) this was used, but going back and watching the video you can see the extra track segment that bypasses the loop is indeed installed

Also the train patent suggests the ride did have seat belts although just small lap belts.

And finally a couple of different pictures for the ride.

The article this info came from can be seen here (In Russian) and includes some rider tesimonials for good measure.

I dont know if this has been mentioned before, but heres a little bit of minor trivia.

Furius Baco can run 3 trains, but it literally never has. The transfer track/holding brake is meant to be an unload platform but has been disabled ever since the ride was built.

Projektion said:
I dont know if this has been mentioned before, but heres a little bit of minor trivia.

Furius Baco can run 3 trains, but it literally never has. The transfer track/holding brake is meant to be an unload platform but has been disabled ever since the ride was built.
Click to expand...

Let me elaborate on this one. Furius Baco was sold to PortAventura witn an hourly capacity of around 1,400 pph running 3 trains. As @Projektion mentions, the ride was designed with 5 blocks to allow for 3 trains as follows: station (load), preshow area, launch (layout), service brakes and transfer track (unload).

Upon opening, the coaster started using 2 trains due to many problems with the ride being a prototype. However, during peak season (before the ride had to be shut down due to cracks in the foundations in the lake) the park tried to run 3 trains as originally intended but for a short period of time. To achieve optimal operation, there had to be 8 attendants (!!) on the ride platform, which would have been the biggest ride crew in the park by far (normally, PA are cheap-asses and staff their rides with 2-3 people on the platform). Since this proved an operational nightmare (high operations cost, extremely low dispatch intervals which put a lot of stress on the ride's crew and guests) to increase the hourly capacity by a small margin (compared to 2-train operation) the park finally decided it was just not worth the hassle and resources.

On 2 trains, people board and leave on different sides of the station block. The transfer track is just a waiting block for the train ahead to clear the station, as seen in the picture below:

On 3 trains, people boarded on the current station (left their bags at the far end of the loading side in some cubbies) and unloaded on the same side they had boarded where the current transfer track is (hence the stairs coming from that side of the station building). To hide the maintenance shed and avoid confusion with guests when unloading, the park themed the transfer track with wine barrels.

Bonus information: the preshow doors were disabled shortly after the ride opened after many failed attempts due to issues with the doors tripping the ride sensors into thinking there was an intrusion in the ride preshow area. In fact, if a train in the preshow had to be brought back into the station and said train had already begun the launch sequence (have you ever noticed the slight rollback to align with the catch car?) it was just phisically impossible because the was no clearance between the back of the train and the width of the doors once they were closed.

This caused many issues: the park had to run the ride with the preshow doors open at all times. First, this meant boarding guests could see the entire preshow, thus ruining the surprise. Secondly, the preshow area was too bright and often the media effects couldn't be seen properly. Thirdly, guests often paid more attention to the train ahead about to launch thus slowing down loading/dispatches. And last, for safety, if a (stupid) guest approached the preshow area, the entire ride automatically went down.

After many years of the park running the ride with the huge station doors wide open, PA finally installed a wooden-themed plastic screen that goes up and down after each train has left the station (a bit like Manta at SW San Diego).

oriolat2 said:
After many years of the park running the ride with the huge station doors wide open, PA finally installed a wooden-themed plastic screen that goes up and down after each train has left the station (a bit like Manta at SW San Diego).
Click to expand...

Didn't that also break on its first day of operations or at least very soon after the park opened that season?
In my visits to PA since it was installed, I've never seen it working.

Projektion said:
Didn't that also break on its first day of operations or at least very soon after the park opened that season?
In my visits to PA since it was installed, I've never seen it working.
Click to expand...