It does look MILES better.

Staff member
Social Media Team
Leisure Expert Group (formerly Jora Entertainment) have released some pictures of their work in the queue line - and it's fantastic!

Lofty said:
Leisure Expert Group (formerly Jora Entertainment) have released some pictures of their work in the queue line - and it's fantastic!

Looks great! Out of interest, are Jora Entertainment and Jora Vision the same company?

Matt N said:
Looks great! Out of interest, are Jora Entertainment and Jora Vision the same company?
Click to expand...

No, they split a few years ago into 'Jora Vision' and 'Jora Entertainment', and then Jora Entertainment went under, becoming 'Leisure Expert Group'. Most of their senior staff stayed the same.

Lofty said:
No, they split a few years ago into 'Jora Vision' and 'Jora Entertainment', and then Jora Entertainment went under, becoming 'Leisure Expert Group'. Most of their senior staff stayed the same.
Click to expand...

Yeah, that's what I meant by 'went under', that's why they split the businesses.

After Mystery River last year; Movie Park has announced their other major water ride is now being refurbished for this season!

The park is already opening in May a new mini Paw Patrol themed area 'Adventure Bay' in their Nick Land, and a new Loony Tunes 4D film is being added this year.
However they have just revealed on their social media sites that their popular Bermuda Triangle dark water ride where guests enter a volcano and all sorts of weird alien **** is inside is being renovated and renamed. This summer guests can travel back to the 1950s and experience "Area 51 - Top Secret".

As part of our long-term quality strategy, Movie Park Germany has exciting new items in its luggage. In the summer, a classic shines in new splendour: the water attraction "Bermuda Triangle" is re-themed. The popular ride, which is unique in Europe with its dimensions and mix of darkride and waterway, is embroiled in a new story around the mysterious Area 51 on Groom Lake in the Nevada desert. "The water attraction is one of the oldest rides in the park and at the same time the most popular. Many of our long-standing visitors have also wished for a new edition. Just in time for the hot summer, we will offer our guests the right refreshment with 'Area 51 - Top Secret', "says Manuel Prossotowicz (Director Marketing & Sales) with a wink.
Visitors can look forward to a musical identity specially composed by IMAscore as well as numerous effects. Idea and concept come from the own creative department of the Movie Park Germany, which developed these in close co-operation with the team of IMAmedia. Thematically it goes back to the 50s. The military area around the Area 51 is a big secret to the population, rumors about supernatural life forms at Groom Lake are loud. To increase transparency, the US government invites the public to an open house on the military base. How much truth is behind the rumors and what secrets of Groom Lake otherwise holds, visitors can find out on the mysterious journey itself. Until June, the attraction will be closed due to the costly renovations and refurbishments. The opening is planned before the summer holidays.

Staff member
Social Media Team
I really enjoyed this when we visited. It was the right amount of 'WTF' to work? Plus, the drop never seemed to end.

I hope they do keep the WTF factor for it, and just polish it up a bit so it feels a bit less tired. It just needs some love, rather than a complete overhaul!

I'm glad they are refurbing it though, after hearing some rumours it might be on its way out!

https://twitter.com/i/web/status/1106533614861336576
IMAscore themselves have now confirmed their involvement (not that there was any doubt about that).

Plus the park have stated that the volcano exterior will be redressed to look like a mountain in the Nevada desert.

EDIT:
The park have also released a teaser trailer.

Staff member
Social Media Team
It looks like they're potentially going down a bit of a darker route?

Movie Park shared on Facebook a look at some new theming items being delivered for Area 51.

And on Instagram they shared a look at the volcano being repainted.

Raft61 on CoasterFriends.de shared a look at the UFO which is a new feature for the ride's entrance.

After seen this picture : 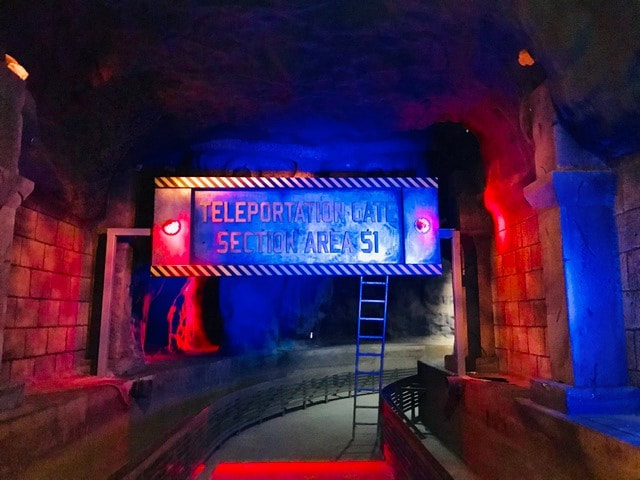 We have a soundtrack! Well, a chunk of one... As always with IMAscore, it's good. No surprises there.

The old Ice Age dark ride which has been SBNO since 2016 is being finally removed. Company
BST Becker Sanierungstechnik GmbH posted on their website that since November they have been working to entirely rip out the interior of the showbuilding - but the building will remain standing. After fans picked up on this the post has been since removed. ​
Source​

Could possibly a sign that a new 2021 attraction is on its way? Will be interesting to see whether they stick with a family dark ride or do something different with the building.