Hard to rank some of these having only ridden them once (e.g. Shiekra and Kumba) but here's my list.

1. Mako
2. Montu
3. Incredible Hulk
4. Cheetah Hunt
5. Kumba
6. Mine Blower
7. Sheikra
8. Harry Potter and the Escape from Gringotts (more for the dark ride aspect but it is technically a coaster!)
9. Revenge of the Mummy
10. Manta

Or something like that. It's all very interchangeable after the Top 2! Haven't ridden a Disney cred since 1988 so can't include any of those.

You’ve got 13 days left to get your lists in if you want your opinion to be counted, guys!

Stupid Velocicoaster is fantastic, so I gotta rearrange this now.... idk, I still love me some Kumba... and I've yet to front seat or night ride VC....

If anyone else wants to contribute, remember that you have just over a week remaining!

1. Kumba (Was still a top 10 before RMC's pushed it out...what a ride)
2. Hulk
3. Kraken
4. Sheikra
5. Montu
6. Mummy
7. Cheetah Hunt
8. Gringotts
9. Hollywood Rip Ride Rockit
10. Scorpion eh I'll give it over Expedition Everest. The latter is more fun/better ride but the former is one helluva intense shot.

Dragons would've been #2 but as they no longer exist...not gunna list em, but yeah would be up there. I loved those rides. I recall weirdly liking Ice (whichever that became) more but both were great. I've not ridden Manta, Mako, White Lightning or Mine Blower. I reckon some of those would make the list, as will Velocicoaster and IG once it opens, so this will surely update

Ironically I never felt FL had the strongest coaster lineup, some good ones but ya know was more about big park experiences than rides. This will be changing in a big way!

If you’d like to contribute to this poll, there’s still 2 days left!

Right then; apologies for the double post, but the month of May has now ended, and as such, I have the Florida poll results!

In total, 21 members ranked 27 different coasters. Before we start, I should clarify that for the duelling coasters (Dragon Challenge and Gwazi), I amalgamated the two sides together into one entry, as some did this and some didn’t. For those who listed the two sides separately, I just went with your highest entry out of the two, and removed the lower of the two, so your list only ended up with 9 entries. Apologies if that annoys you, but it seemed like the fairest way to do it to me.

Right then; let’s get to the results, shall we? So, without further ado, here is CF’s Florida top 10, as of May 2021:
CoasterForce’s Top 10 Florida Rollercoasters
So, fellow CFers; those are CoasterForce’s Top 10 Florida Rollercoasters, by my reckoning! For some clarity on how I calculated the final score, what I did was I calculated the mean ranking of each ride, and then divided the mean ranking by the amount of riders, so we can factor in the proportion of the site’s membership that rates that ride.

In terms of the results themselves; a very interesting set of results, in my opinion! For starters, there was a far smaller amount of “coasters per member” in Florida than in the UK or Germany; a lot of the lists were made up of the same favourites.

It would also appear that the top 10 in particular has a heavy bias towards Florida’s B&M rollercoasters, with 7 of the top 10 being manufactured by B&M; the highest non-B&M coaster in the list was Revenge of the Mummy at #6, with Mine Blower at #7 and Cheetah Hunt at #9 also making the top 10. Florida’s top 10 is also somewhat older than that of the UK and Germany, on average; the average opening year of Florida’s top 10 was 2004.9, which I’ll round up to 2005. By comparison, the average opening year of the UK top 10 was 2006, and the average opening year of the top 10 in the CF’s favourite coasters overall poll ran by the mods was 2014 (I forgot to do this for Germany, for some reason). 6 of the top 10 were manufactured post-2000, but only 3 were manufactured post-2010. As such, I think we can ascertain that currently, many of the Florida favourites are reasonably old, and there’s also a huge bias toward B&M, with them making up 70% of the top 10.

With newer blockbusters like Hagrid’s, VelociCoaster and Iron Gwazi being made by different manufacturers, though; will B&M’s reign in Florida last much longer? The former two (Hagrid’s and VelociCoaster) are currently hampered somewhat by limited ridership; only 3 lists featured Hagrid’s, and only 1 featured VelociCoaster. If I were to rerun this poll in a year or two’s time, when travel restrictions will hopefully have eased and more people will have ridden these two rides, I can sense that they would rank much more highly, as their mean rankings were promising!

So, in conclusion; here’s the spreadsheet showing how I did the calculations: 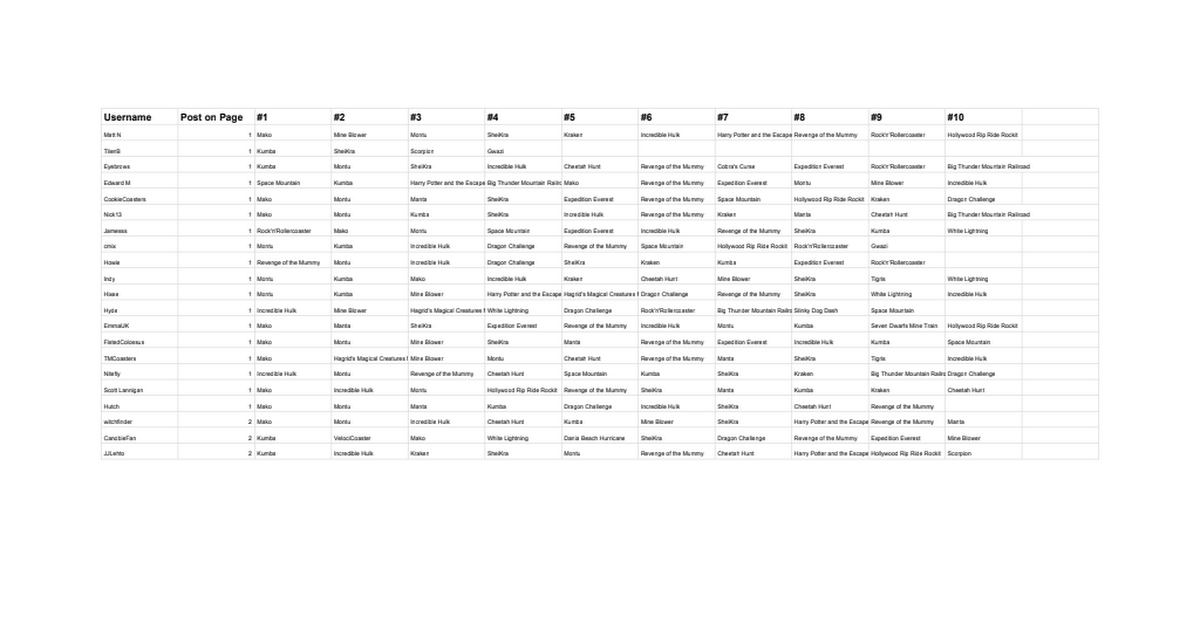 I hope you enjoyed this poll! If you’re up for it, this month’s poll is another USA one; I’ve decided to go for the other touristy state in America, and I’m going to try and ascertain CoasterForce’s Favourite California Rollercoasters! If you want to take part, look out for the topic, as it will be coming very soon!
You must log in or register to reply here.
Share:
Facebook Twitter Reddit Pinterest Tumblr WhatsApp Email Share Link
Menu
Log in
Register
Top