put the zinger back in (cowards)

So, as promised, I can now confirm; **** is indeed happening at WOF. An excavator is clearing land behind Boomerang and markers are popping up;

Going to double-post, apologies in advance. I've been talking with a lot of people over the past week and would like to spill some tea.

First of all, WOF already has a few construction projects underway, mostly just new restaurants and amenities. There is still potential that this new excavation could be a nothingburger and not related to a new ride in any way; however, everyone seems to agree that we are - at long last - looking at a new coaster project.

Details are fuzzy, but the popular rumor right now is RMC Raptor. There's been some indication that the coaster will not be a clone of any kind. Nethertheless, this is still prone to a major upset and the coaster could realistically be anything (not a giga tho). Screamscape mentioned back in March that they were talking about a revival for their 50th anniversary in 2023, codenamed 'Project 2.0'. Currently this seems to be leaning more Zambezi Zinger than Orient Express, despite a revival project of the latter having allegedly been under consideration only a few years ago. Double points given that this clearing is coincidentally taking place on Zinger's former site, behind Boomerang.

Right off the bat, it's easy to dismiss the notion that, inline seating aside, a Raptor and Schwarzkopf Speed Racer are similar models. From an enthusiast standpoint, that's not unlike comparing a B&M dive to an Eurofighter. I suppose that if they wanted a true revival, Gerstlauer could suddenly evolve their smaller-scale Bob Coaster model and create something gigantic, which is unlikely. In a perfect world they could simply buy Zinger back from Parque Del Café - just for the memes. However, the public will not judge the differences and nobody will be complaining if this ends up being a Raptor.

Now, there's the question of what will happen to Boomerang, since it's been surprisingly problematic in recent years, obscures the main site, and served as Zinger's direct replacement. Unless something drastic were to take place within the next few months, my answer is that it won't be leaving.

Overall, these are exciting times ahead for Worlds of Fun. There's still alot of time to temper expectations and/or have something completely different come to fruition, but if this somehow ends up what people are saying that it is then 2023 could be the year that WOF actually gets a great new coaster.

I love worlds of fun probably more than most, but I'll believe it when I see it. for all we know, this could be some utility road connecting to the waterpark or something

As of June 7th, 2022, I’m being told that the old dinosaurs alive area is a hard hat zone

MurphNation said:
As of June 7th, 2022, I’m being told that the old dinosaurs alive area is a hard hat zone
Click to expand...

MurphNation said:
As of June 7th, 2022, I’m being told that the old dinosaurs alive area is a hard hat zone
Click to expand...

Remember when they did that at Kings Island, and announced a Giga, and then built said Giga around the Dinosaurs Alive exhibit?

Also, I second this:

cocoa said:
put the zinger back in (cowards)
Click to expand...

And now the permits come out, only submitted three days ago;

So apparently thanks to Parks Pro on youtube and his source Coasterchaos on insta have found more information on the 50 grading plan on Compass Kc. So now worlds of fun will be receiving a wooden coaster??? I'm so confused lol PHOTO SOURCE: PARK PROS LINK:


Well, thats out of left field. Is Timberwolf having issues?

MurphNation said:
So apparently thanks to Parks Pro on youtube and his source Coasterchaos on insta have found more information on the 50 grading plan on Compass Kc.
Click to expand...

OneClickGang on Insta was responsible for blowing the whistle. Apparently this is indeed a third wooden coaster, which is baffling but whatever. Didn't have this one pegged, that's for sure.

On the speculation side of things, Gravitykraft/Gravity Group is a very simple assumption. Prowler already exists and Timberwolf might as well also be a GCI at this point. Safe to say that there will be differences between those two and this. Whether they take it up a notch with inversions or fill a family friendly gap in their lineup remains ti be seen.

Maybe Dorney and WoF are getting the same model/layout? Cloning it would save on costs.

Jackson said:
Maybe Dorney and WoF are getting the same model/layout? Cloning it would save on costs.
Click to expand...

Or maybe WoF is just outright getting Dorney's woodie. 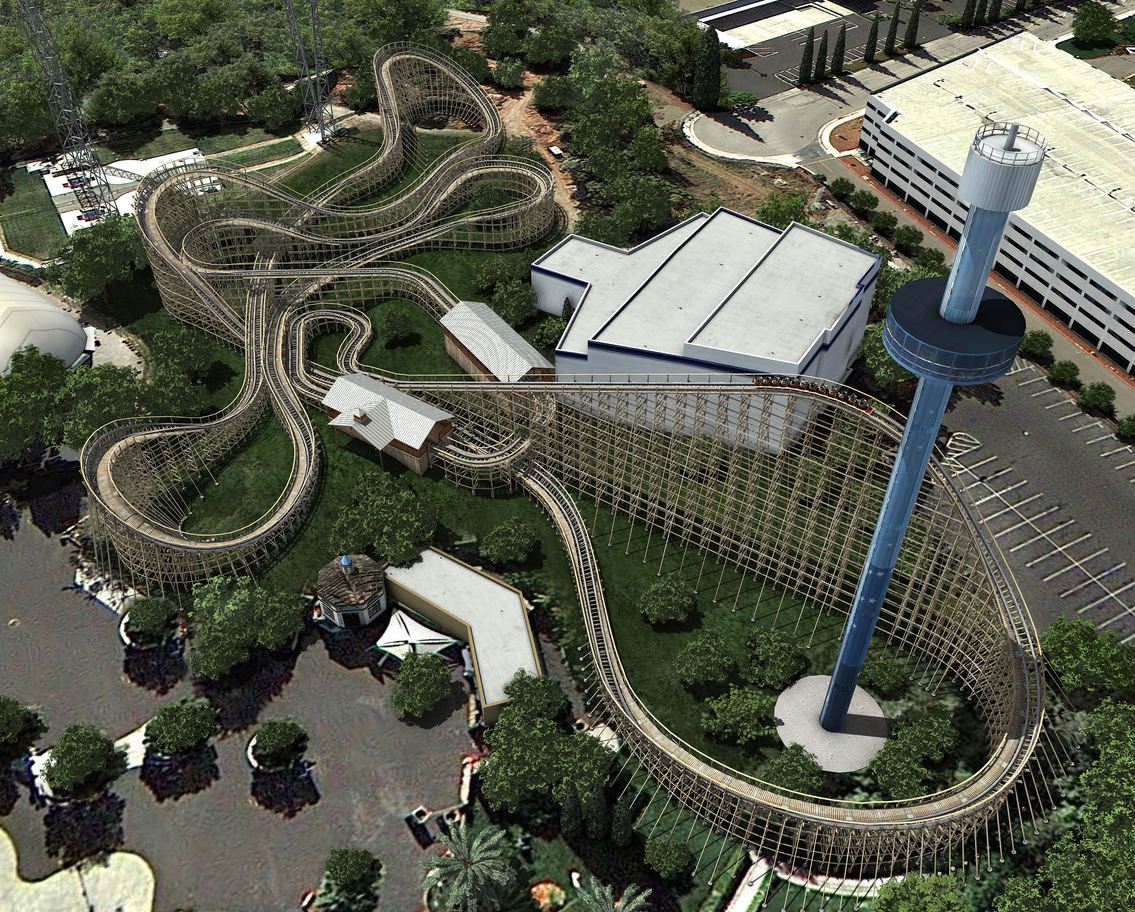 Hyde said:
Oh wow! They even leaked a rendering of the potential wooden coaster layout!

Hyde said:
Oh wow! They even leaked a rendering of the potential wooden coaster layout!

If this woodie ends up being a Gold Striker layout now... the scenes