Could this potentially be their go at the S&S Free Fly product?

Staff member
Administrator
Moderator
Social Media Team
^The more I see, the more I think it's going to be something like that. It's only going to have relatively narrow trains by the looks of things though.

Looks like we are all done with track work

Could this not be a new type of dark ride system they're trying out? Whatever it is, it's weird.

Sent from my E6653 using Tapatalk

Lots of rumors elsewhere that this could be for the new//rumored Guardians of the Galaxy coaster "going to" Epcot.
Uh, well, Disney does have a long history with Vekoma.

For those wondering what the rotating flyer concept might look like. Someone knocked up an example of what they think this is a test setup for.

So the 'pipe' part of the track would be for loading and maybe a dark ride section and then it turns to face the floor/ceiling? Kinda like a coaster version of Forbidden Journey. Is that right?

Interesting idea, would suit a dark ride type set up as Sue said. Could have it as a 4D experience or 5D even...

I am still utterly confused by this whole thing.

It surely has to be a screen based dark ride with seats mounted on the outside? Weird it almost seams a bit backwards given the technology that dark rides now use to actually have a coaster style track. Cant wait for the is it a cred debate!

Bet it still rides better than an SLC.

Phantasialand has been very busy in the off season with many improvements for the park's 50th anniversary.

Chiapas has received a new entrance portal. And according to the screen on the left the Single Rider Queue will be returning.

Picture from Phantasialand
The rockwork around the final drop has been repainted.
There is also a new path connecting the Mexico and Africa areas near the Talocan viewing platform.
The park have also installed a new hydraulic system in the Chiapas turntable so it isn't as harsh when quickly turning.


Some more small detailed bits of theming have been added to Klugheim and a new drinks stall has been constructed in the Klugheim square.
Black Mamba has received new seats. The park also last year started renewing all the rockwork in the Africa area, this year they completed the remaining rock faces.

The historic Victorian Berlin tram which the park restored for the last Wintertraum has remained in place on Kaiserplatz as a new bit of theming and a gluhwein stall during the Winter season. When the Berlin area opened in 1970 this horse drawn tram took visitors up and the down the street. So it is rather fitting the tram has returned to the park for the 50th anniversary.
The park will also be holding 4 Celebration Days in the summer to mark the anniversary. On each of the days the park will be open from 9am to midnight and at the end of day there will be a firework display.

River Quest
By far the biggest change is River Quest. The 15 year old rapids has received a lot of new theming to make it look brand new and fit in as part of the new Klugheim area.
Picture from Phantasialand's Facebook page.

The new theming around River Quest's new entrance - which is now in Klugheim itself rather the old entrance from the China area. The park have used this off season to create the exterior of the new entrance, the interior which requires a bridge over the trough below will be installed in the next off-season. The new entrance shall then be in use for the 2018 season.

The park have added a real sailing boat to the basin at the start of the ride.

The tunnel under Raik has received more detailed theming and the lifts themselves have been themed!! Pic: Freizeitpark News NRW.

New theming around the whirlpool.
Pictures from Freizeitpark News NRW.

From the Phantasialand Blog an article about the new whirlpool theming.
https://phantasialandblog.de/river-quest-in-stein-gemeisselt/


Rough translation:
"We make something new look old," jokes Annette Pieck, project manager at Phantasialand, referring to the current design of the whirlpool of Rapids ride "River Quest". "The environment of the vortex must look as if the water masses had already done their powerful work here for an eternity, and nature would recapture its place." What was once here is only present in fragments. The stone guards and weathered pillars bear witness to this along the fairway. The Portuguese company Universal Rocks is entrusted with the implementation of all the specifications of Annette Pieck in order to make this environment so impressive. While the experts have created the extraordinary basalt rock in Klugheim last year, the masonry of "River Quest" is also impressively worked with spatulas, sponges and brushes. What looks like years of weathering exposed or destroyed by raw natural forces in wind ropes, are man-made precision-formed works of art: thus crusted surfaces with plastered plaster, so mosses and lichen spread on the stones.
The design of an extraordinary thematisation requires a loving look for detail and, in the case of "River Quest", also on nature itself. "We work down to the smallest element, such as up to these filigree roots, which rise on the rough wall surface "Says Annette Pieck. "Everything affects the overall experience, even if it is not perceived immediately or consciously. Just the water swirl of "River Quest" offers us many possibilities to shape the character of this particular attraction. The actual nature serves us as the best example. It has to look realistic in order to create a coherent atmosphere. "
And that is indeed the case. What makes the appearance of real wood here is based on a welded steel framework, a plastic mesh and cement, which is applied by the experts of Universal Rocks. "The supporting pillars look quite rotten, with deep notches and broken edges. What is created here is impressively realistic and can not be distinguished visually from real wood. Just as we want it, "says the project manager proudly.
The ornamentation of the earlier elements is also impressive. In addition to the red and green frieze along the exterior wall and the diamond-shaped ornaments between the former windows in the masonry, the stone carved hexes have also been preserved. It is said that the former builders, with these formations, paid homage to the Klugheimer Basalt, which also extends into the sky in hexagonal columns.

What an amazing park! Everything there just looks fantastic! It's nice to see a park care so much about its presentation. I wish UK parks would follow suit.

Construction for 2018? - EDITED: Now Confirmed to be Rookburgh a steampunk themed area, see posts below.
Last year the park demolished Race for Atlantis and the events buildings that were behind it - opening up a large site around the same size as Klugheim.
They have been working on digging a large pit and poured concrete piles for walls. The drill and diggers have now left the site and crane has been erected.
Tobi, famous for modelling Taron during its construction, has started a model of this site to provide people with regular updates. This shows the view of the pit looking towards Maus au Chocolat. 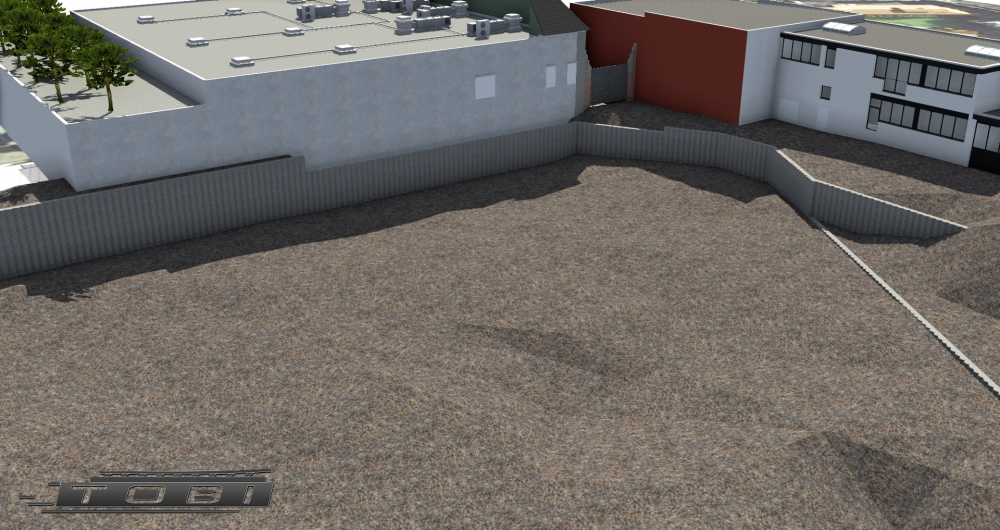 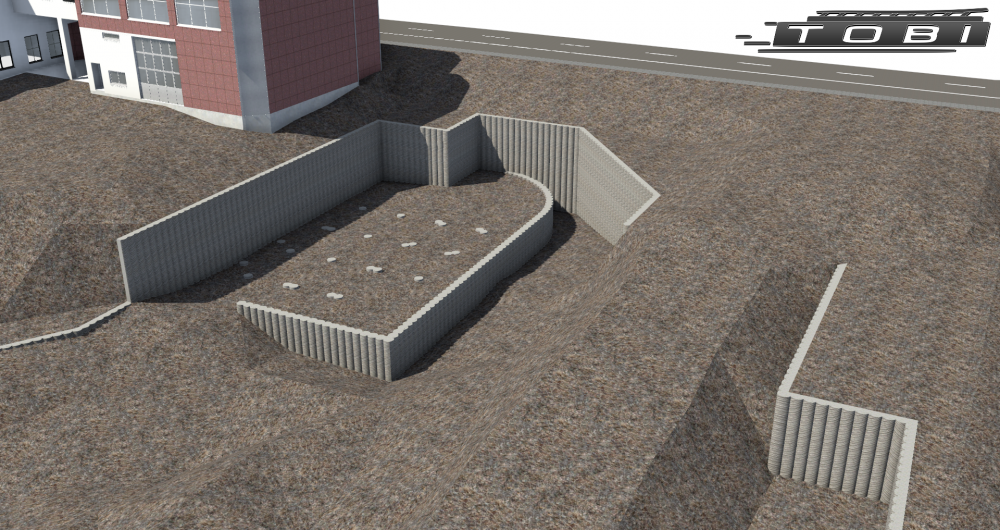 The park are currently erecting a wall to block the view of the site from Wurmling Express.

Nothing is known about the new area/attraction(s) other than the park claiming it will be even better than Klugheim! Fans speculate this will be a 2018 attraction.
It will be interesting to see what ride or rides will materialise and whether the area is an extension of the Fantasy or Berlin themed areas or an entirely new area.

ROOKBURGH - EDITED: OUTDATED NOW see posts below.
Phantasialand have applied to copyright the name: Rookburgh.
It could possibly be the name of the new themed area currently being built.
Alternatively, as the name sounds very medieval/castle like - very Klugheim - it could be the name of a new hotel at the park with a Klugheim theme.
In Klugheim overlooking the extension queueline there is a large plant wall which the park have said is temporary. The park own the strip of land behind the wall right back to their Conference centre.

From CoasterFriendsForum. Showing on the left the plant wall in question. 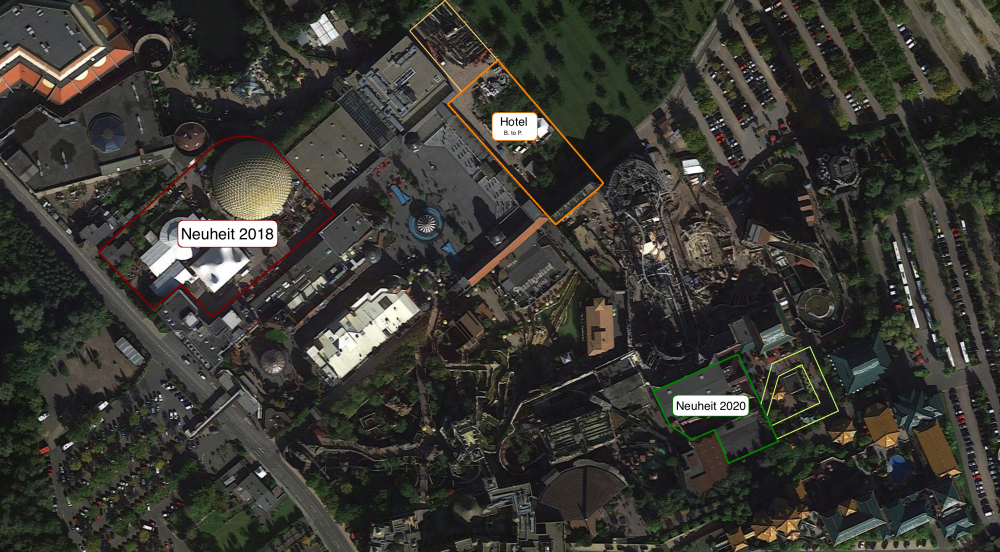 From Phantafriends.de
The orange and yellow boxes show the land behind the plant wall in the park's ownership. Note at the time this picture was taken it was being used for storing track and building materials during Klugheim's construction - the land is now completely empty.
Also on the left of the image you can see the red square showing the current construction site.
Last edited: Apr 1, 2017

I don't understand how Phantasialand has room to get better and better, but it keeps happening. Going in a few weeks, so I'll make an effort to do River Quest.

This park is just head and shoulders above most in Europe. Every decision they make lately is the best they possibly can. I can't wait to see what they have in store (and go back to the park in a few weeks YAY!).
You must log in or register to reply here.
Share:
Facebook Twitter Reddit Pinterest Tumblr WhatsApp Email Share Link
Menu
Log in
Register
Top