After mentioning to her about these sort of scare events, and that there was a local (Bristol-based) one, we “had” to go…

Putting all of my dislike for these events aside, I actually really bloody enjoyed my evening! I’ll do a little chronology of our night, with some closing thoughts at the end. First off, a pre-event picture. You’ll notice the pictures are a little lacking in this report – we only snapped a few on our phones, and didn’t do a very good job! You’ll have to look at some official photos for some better quality ones.

Also, disclaimer, there will be some spoilers. I’ll try to keep them small, but it’s hard to review these sort of events without giving a little bit away. 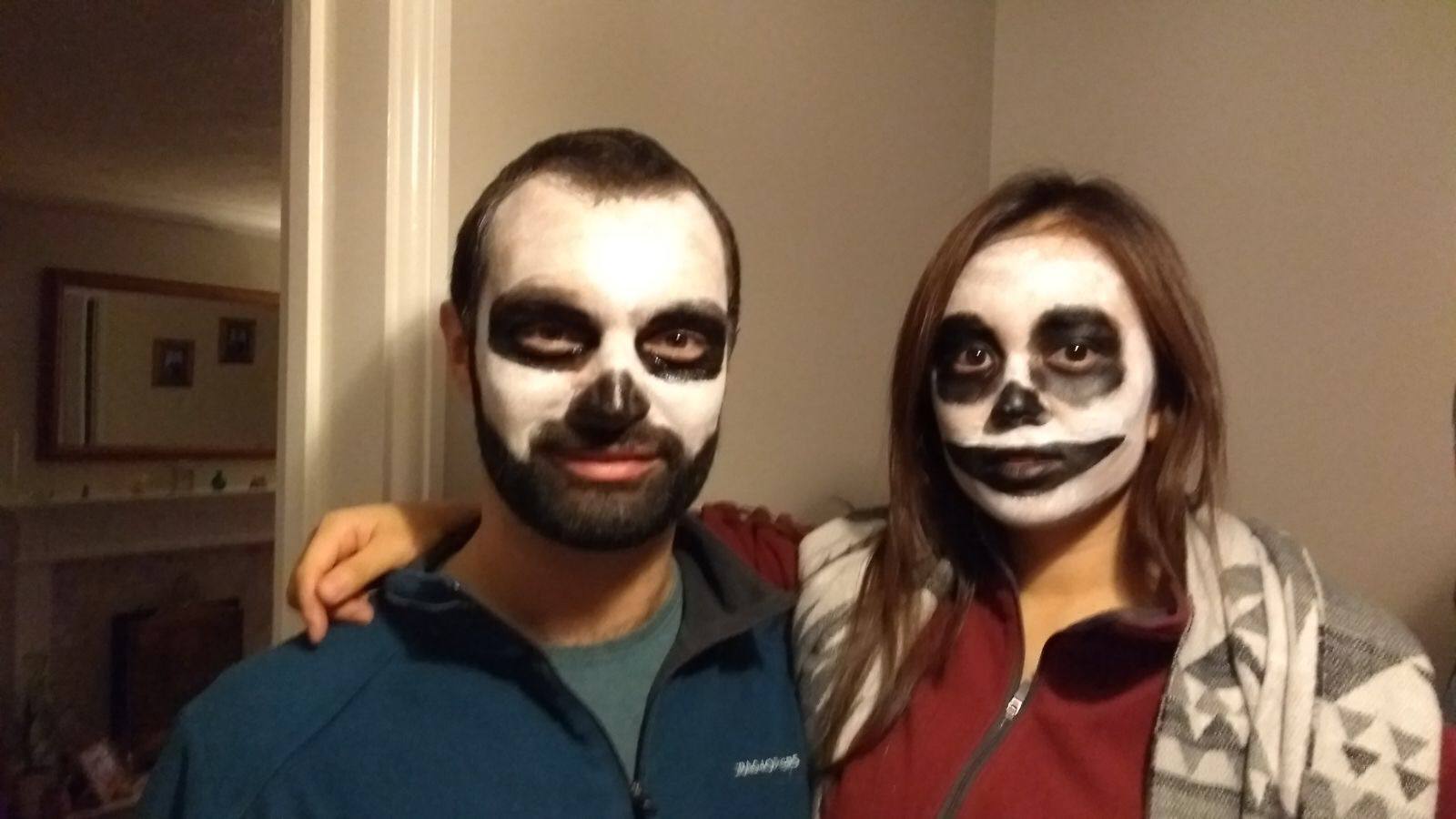 Make-up to hide my identity…

We visited on one of their busiest nights, so I was expecting big crowds and long queues, but the staff were very efficient at admitting people and the long entrance queue (underneath the excellent burning “FEAR” sign) moved quite quickly. Once inside it’s a short walk through the normal access area (it’s been a very long time since I visited the country park, but I think that’s the normal way in), with a rather ominous feeling path leading towards the main “plaza” area of the event. Along the way there are, of course, plenty of actors hiding away ready to jump out or, as we encountered, creepily and slowly approaching you and whispering gibberish. Sets the scene well!

Now we were a little basic, and did the classic thing of just doing the mazes as we got to them. We’d arrived early and figured we’d have plenty of time to get round all of them, even if it was busy. Purgatory
Theme/story: You’re being admitted to, and then escaping from, a prison. I think.
Likes: This maze had two stand out sections for me, the tunnel and the final “free form” section. Both sections did a great job of isolating you from the group and, in my case, my girlfriend. We were separated and forced to go through those sections alone. The tunnel is just rather freaky in its own right, but the outside section with the lights, sound effects, screaming actors, it was pretty hectic!
Dislikes: Nothing really stood out as being bad in this one. It did feel a little short, but part of that might have been the excitement kicking in.

Next we headed to Phobia (no photo here, oops).

Phobia
Theme/story: You’re in a clinic that is researching/testing out phobias.
Likes: There’s a room with some hooded figures (no more spoilers), which is really freaky. Properly gave me the chills. There was also an excellent “squeeze” corridor, that was very disorientating in the dark and really threw my confidence. Oh and also a clown. **** that guy.
Dislikes: I can’t really pick anything out about this one I didn’t like. Definitely left both of us with very rapid heartbeats!

At this point, we ended up being just in time to catch one of the fire shows. These run every hour, and feature an incredibly impressive sound system, lots of fire, and a really intense circus ring leader type character and lots of psychotic raving circus performers. We bumped in to the ring leader just before the show, and his make-up was incredible. An overview of the central plaza. Once the show had finished, we grabbed a drink and headed in to the next maze – Anarchy: Live. Anarchy: Live
Theme/story: You’re taking part in a Get Me Out Of Here come Hunger Games type game show that is being broadcast Live on television.
Likes: The strobe maze section of this maze was excellent. There were people climbing above me, coming through the walls, etc, all while I’m trying to navigate a single file pallet maze with lots of strobe lights!
Dislikes: This did feel like the weakest of the mazes to me. With the exception of the section described above, the rest of the maze felt like it was a little lacking in terms of guest interaction. The chainsaw at the end (and the confusion that the looping sections caused), was the only time I actually felt confronted by an actor. This one definitely didn’t feel as good as the other mazes – although the concept was good.

Finally, the last maze – The Fourth. This is the one I’d seen/heard the most about, with SM campaigns and discussions really hyping it up.

Theme/story: An underground (military) research facility has discovered a strange creature.
Likes: Just all of it. The introduction, the first lift, being chased (and attacked) by the creatures, the second lift, just all of it. Felt like a complete narrative, with scares coming from every angle, all the time, and an impressive length. We both agreed this was our favourite.
Dislikes: Honestly? That I couldn’t do it twice.

Here are a couple of selfies: So, some closing thoughts then.

Fear is a very impressive event. The mazes are very well done. There is heaps of creativity in terms of creating the sets and stories. They don’t feel like they’re just plywood tunnels, and they’re each nicely different. The sets are detailed, with excellent scenery and props, and in some cases the smells (hopefully they were on purpose)! The atmosphere throughout the event was brilliant, with everyone (even the actors), clearly there to have a good time. It really gets the crowd buzzing.

The Fourth was my clear favourite, but we thought Purgatory and Phobia were both a very close second place. Anarchy: Live was a little lacking, but that may have been in part due to doing it third.

The actors were all incredible, with notable shout outs to the actors doing the “intro” sections of the mazes (the guy taking your photo in Purgatory, the woman admitting you to the clinic in Phobia, the guy introducing you to Anarchy: Live, and the solider prepping you for The Fourth). They were clearly working very hard to sell their role, and personally I thought it was excellent. The other actors in the mazes were doing a good job too, keeping their motions relatively subtle until the big scares (allowing them to sneak up on you). Then the actors in the street area were great at interacting with guests – they weren’t just running and yelling at you, but really selling their characters and also, crucially for me, being willing to interact for selfies and taking some back-talk.

As far as I can immediately recall, the only downside I can identify was their queue time estimates. I can see the merit in over-estimating the queue lengths (it’s the “good” kind of surprise), but in every instance the stated queue time was nearly double what we actually queued. It didn’t bother us, but I did overhear a lot of people saying they were getting worried they weren’t going to get everything done. I think slightly better predicting of the times would have helped them to relax and get lost in the event.

Overall, an extremely impressive event. The mazes were all suitably scary for a wimp like me, and we both had an absolute blast. By the look of the queues, I think this event will be around for many years to come, and I think if The Fourth is anything to go by there are going to be some impressive things to come!

It’s a bit late this year (I think their last night was the 31st Oct), but I would highly recommend this event to anyone in the area next year. Not least to support the highly promising local talent!
You must log in or register to reply here.
Share:
Facebook Twitter Reddit Pinterest Tumblr WhatsApp Email Link
Menu
Log in
Register
Top