Coming soon: My first RCT3 project!
The park is named Bluegrass Boardwalk. It is not a replica of the failed revival of SFKK. I just thought that the name would sound good.
More pics and updates to follow, including a B&M Mega coaster!

Hey gopats1479 welcome to Coasterforce and welcome to our little RCT 3 section of the forums, look forward to seeing your work, hope you can stick around and perhaps enter some of our competitions etc.

Thanks! I really look forward to the competitions. I've seen the work some people do and I think it's amazing. I try not to take cues from real-world designs. I've already got a couple old designs that I might end up posting, including a couple B&M Wingriders.
S

^ Wow that sounded creepy... please don't assault him or anything.

Update #1:
I finished the first coaster design a couple nights ago, but I'm using Steelworx for the first time and it's taking me longer than expected (although the footers are a nightmare too). Here's some specs on the B&M Mega Coaster called King Cobra!
Height: 215 ft.
Drop: 202 ft.
Speed: about 75 mph, don't quite remember
Ride time: 1:59
Airtime: 0:24
Ride length: 4980 ft.
Drops: 13
Special features: two overbanks, a boatload of airtime hills
Note: this B&M has no pre-drop because the first drop is not a turn
I have also added a couple smaller rides (Scrambler, Chairswing, etc.) and a Boomerang. Steelworx is complete on the Boomerang but I'm still working on footers. All previously mentioned rides have been opened. Pictures will come soon, I promise! I just want to fill up the park some more and get Steelworx done on King Cobra. Cheers!
S

I like to cheat and use boulders as fake footers.

I agree completely, but I don't have any and it probably wouldn't go with the theming. What CS do you use for them?

Sorry for double posting, but this next update is important.
Update #2
So, after recent consideration, management (aka me) has decided that the B&M Megacoaster King Cobra will be removed. The area surrounding King Cobra will be given a complete renovation including one major attraction. There are several choices for the new attraction:
-B&M Wingrider
-Intamin Mega
-Epcot's Test Track-ish ride
In addition, the area will be given a slight theme to the coaster that is placed (i.e., Test Track gets Epcot/futuristic theme, etc.)
Secondly for this update is the Boomerang area. There have been two new thrill rides installed with more to come in the future. In addition to these thrill rides, one major coaster will be placed, along with an SLC somewhere down the line. I'm leaning towards an out-and-back woodie or a B&M (Standup? Floorless?) Twister coaster, but only if the Wingrider is not chosen. Let me know what you guys want to see next. I know I said this last time, but pics will be up as soon as another major attraction is complete (probably an SLC). Cheers!
S

I use the game's default rocks. The Very Large and Large can work 85% of the time very well if you want a more 'natural' appearance than a man-made one.

I use the one that consists of a Large Rock and a Smaller Rock next to it on the title. Most supports will sit snugly between the two as if the rock is holding it in place. Or the singular large rock that generally gets penetrated by a support so it looks like the Rock is part of the support. Basically I find when I use custom supports the layout ends up looking like acupuncture and I try and find ways to soften the industrial aesthetic. In less industrialisation is desired (Sci-Fi for example).

Hiding the base of supports with horrendous amounts of foliage also works. That is if you don't mind cheating and were only using the footers to make it look more plausible.

I would be cautious with using the Wing-rider. As with all CTR it has no sense of collision detection with other attractions/scenery. It can be useful because the great advantage of a Wing-rider is the effectiveness of "near-miss" elements. Unfortunately most of the time the 'near-miss' will be an 'utter collision' and you only find out when riding it, after spending a good hour doing the layout/scenery.

Is is normal I only see words but not pictures ? :s

Removing a B&M Hypercoaster ?! No one has EVER removed a B&M because it was not fun enough !

@portemine, I removed the B&M because Steelworx and the footers were taking way too long. I loved the design, but I got impatient with my first time using Steelworx (mostly the support killer). And the pictures will be up after the next coaster is installed and supported.

@scw55, I've used a Wingrider CTR before, but the one I am going to use is different because the station was inverted on the first one (Nightflight). BTW, your idea with the rocks gives me another idea for the new coaster...Intamin Blitz, anyone?
S

I have a Tilt-Lift coaster (can be seen in my thread) which I haven't been able to custom support due to my support mod and shape of the track. Granted it stops me from theming the very high bits but meh...

Update #3: Progress!
I have finished a little more and have pictures! The park is now slightly more furnished and full. Here's some pictures for you guys: 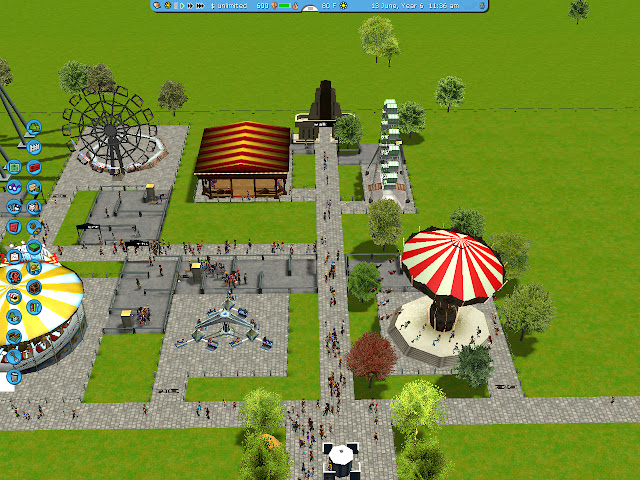 Here's the entrance to the park with some smaller rides. 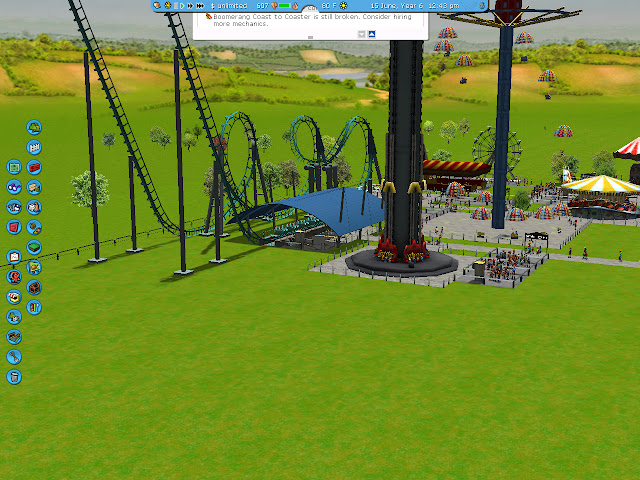 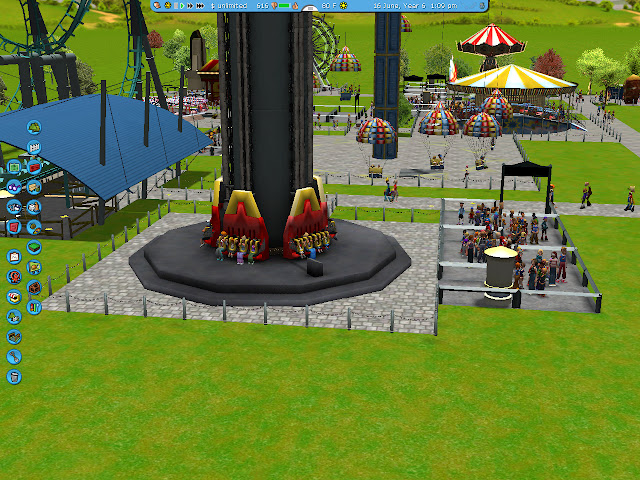 Here's a close-up of Giant Drop. 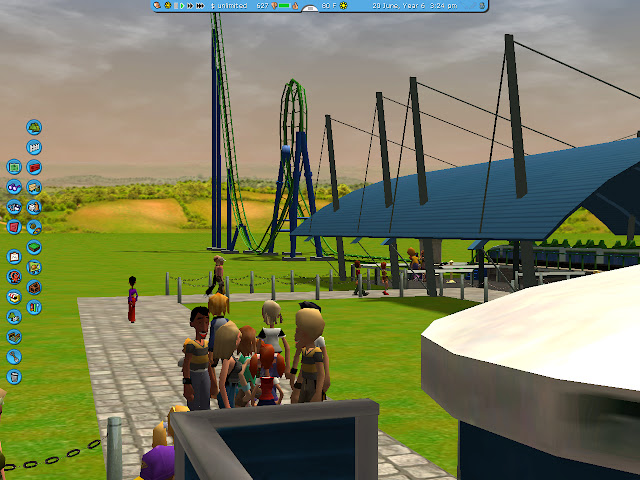 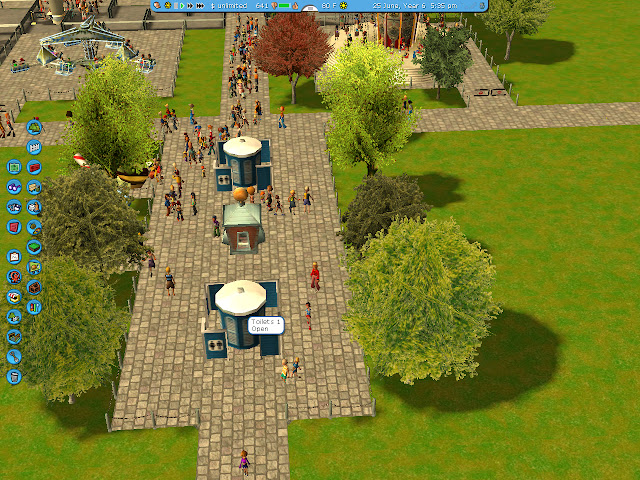 
portemine said:
Removing a B&M Hypercoaster ?! No one has EVER removed a B&M because it was not fun enough !
Click to expand...

Its only rct3, money is no object! :wink:

Looks like a neat park with a diverse range of attractions whilst retaining some of the classics! Steel Falcon sounds exciting....and you sure do a good build up! :--D

It looks very, organised. Yes, more scenery is quite urgent as it will soften the harshness of the man-made feel.


To combat the inverted station problem; for the first piece of track, choose a bog-standard _ piece. Then choose station.

Then you'll have the exciting problems of awful clipping detection. It's awful for CTR to begin with. It's made worse due to the width of the Wing-Coaster.

Let's just say that the wings will be "clipped" on some of the loops and twists. It's absolutely unavoidable. I'm really glad I downloaded the Griffon CTR right now because the catwalks for those are perfect for the Wing Coaster. I changed the station too, so that's pretty much all good.
I realized the same thing about the scenery myself. I actually closed the park for a little while to 1) redo all the paths to Epcot-style, and 2) to finish Steel Falcon and possibly add a woodie. The trees will come in later. I'm having a problem with the entrance paths because I am in Sandbox mode, so they'll have to stay there, but everything else that you have seen will be redone. I'll get some pics and a POV up when the park reopens and when the renovations are done.
S

It is frustrating that for projects that will take a very long time, you're best off using Sandbox mode so you can use any new custom content when you get it.

I dislike the small park size myself of Sandbox.

Every-time you downloaded new scenery, you would have to make a new custom scenery.

It's a case of the lesser of two-evils.