Staff member
Administrator
DreamWorks Animation company & Triple Five, the Alberta, Canada-based developer that operates the giant Mall of America in Minnesota (with Nickelodeon Universe) and the entertainment-heavy, 5.4-million-square-foot West Edmonton Mall (with the Galaxyland Amusement Park), announced plans for an indoor theme park in the New Jersey Meadowlands called American Dream to open in 2014. The park will be located in the giant shopping mall formerly known as Xanadu.

In a press release issued this morning, Triple Five and DreamWorks - which is behind children's films such as "Shrek", "Kung Fu Panda" and "How to Train Your Dragon" - announced the partnership on the theme park.

DreamWorks representatives said most of the rides and attractions will feature its popular characters, and that the park would be the first of its kind in North America.
"We look forward to working with Triple Five Worldwide to incorporate DreamWorks Animation characters, storytelling and technology into a unique and innovative family entertainment experience at the venue," said Jeffrey Katzenberg, the company's CEO.

Triple Five President Don Ghermezian issued a statement saying he expected the park to become a worldwide attraction.
"The theme park will have direct input from the creative talents behind the (DreamWorks) films to create a park experience that will attract a global market," he said.

In addition to the theme park, plans for the American Dream complex include a water park, indoor ski park, theaters and a skating rink to pair with massive space for retail and restaurants.

The best part is that I only live five miles from the mall. ?

Do you think the NFL is going to have a part now since the Jets and Giants plan didn't seem to work out very well?

The Jets and Giants, which both use MetLife Stadium (in aerial photo above), filed a lawsuit last month seeking to block construction of the project, but the State Transportation Department approved the project and Triple Five moved on Tuesday to dismiss the suit.
Once the lawsuit is dismissed I think that will be the end of anything we'll hear about the NFL & this project. :wink:

^You're right you did have more info. Still New Jersey need's 2 of the Largest Malls in the Country??

Am I missing something?

More on topic any chance of a super thrill coaster or do you think it will be more family based?

Have they set a time frame for when it could open? I don't remember reading anything about that.

I think it should be a good park and because Triple Five has a part in this I think it will be much more similar to Nick Universe than anything.

From one of the articles it seems more family based because it said the park was only 14.7 acres. Its double of what Nick Universe is but it's still relatively small. The article mentions more family oriented things like a aquarium, bowling, and a theater.


CoastingChris50 said:
Have they set a time frame for when it could open? I don't remember reading anything about that.
Click to expand...

As the articles say - it will be in 2014, but after the Superbowl is held at the Meadowlands (which is what Gov. Christie was hoping they would have it ready for).

Oh wow, I remember you talking about this a while back, but now that it's official i'm rather excited. I think i'm around 45min away from this park too. Can't wait!


Youngster Joey said:
More on topic any chance of a super thrill coaster or do you think it will be more family based?
Click to expand...

I've a hunch that they'll be a Ferris Wheel at the very least.

I haven't either but it just has similarities. It's by the same developer, it's fairly small, and its indoors.

Yeah, this looks like a bit of a dump really.

Plus, it doesn't look anything like Nick Universe. For a start, Nick has actual rides whereas this is more shows and dark rides and stuff. Actually I'm wrong, Sea Life and Thorpe Park are exactly the same, and have the same target audience and everything because they're owned by the same people. Silly me.

Sheesh, talk about "in the works".
I've been hearing about this ever since I was in High School (and ugh...does feel like a long time ago now)

That.
Especially since I know that area, can't imagine them making it nice at all. :lol:
It will be a miracle if they turn that bog and leftover failure of a ski mall (or whatever it was) into something good!
You guys have any idea how much piss has been poured into that area from drunkeness at Giants and Jets games??

In case anyone was wondering what ever happened with this project - the New York Jets and Giants NFL teams brought a lawsuit against the project, objecting that the theme park would cause parking problems at the nearby football stadium on game days. Today the lawsuit was dropped and construction can now go ahead. :--D

i think that this could be one of these m£rlin attractions that is going to open. they are popular though.

^It's not Merlin. It's Triple Five, the developer that operates Nickelodeon Universe and the Galaxyland Amusement Park in Edmonton.

About time for another update. Click on images to enlarge. 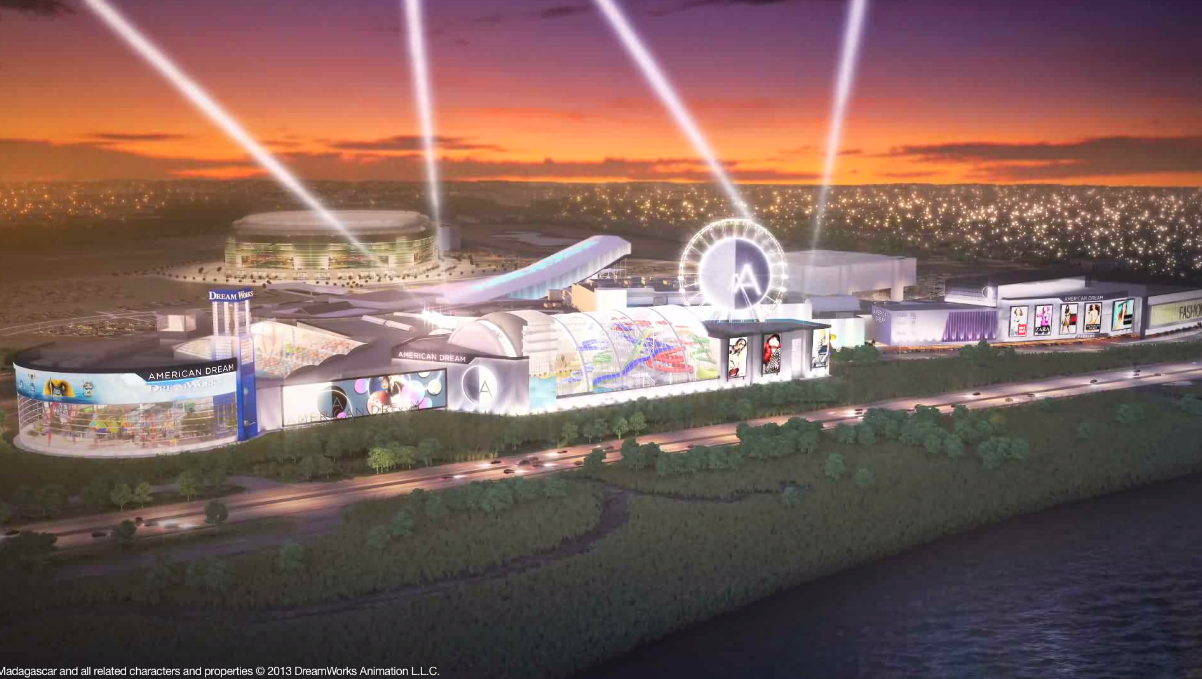 The American Dream, a giant mega-mall complex slated to be built just outside New York City, might finally be on its way to an actual opening in 2016. The developers behind the project - which will finish the partially done (and despised as ugly) Xanadu project - have released some new renderings and now call for completion in the fall of 2016. The project was originally announced in 2011, with most parts slated to have been open this year.
Triple 5, the American Dream's developers, also behind the Mall of America and West Edmonton Mall, both have amusement parks. The American Dream will also have one indoors, coming in at 300,000 square feet. It will also feature a 225,000 indoor water park - both can be seen in the image above which is from the project's website. The amusement park, which will be themed to the Dreamworks characters, can be seen on the left, and the water park more in the middle. Much of the park will be visible through 80 foot tall glass windows - how's that for an advertisement?

This is a similar, but more stylized piece of concept art - take notice of that coaster drawn in the amusement park! Looks like it could be great... but this simply concept art and nothing more. I would still think that creating a park with rides like those at Nickelodeon Universe at the Mall of America would be more realistic. However, that large tower in the amusement park does appear to have some sort of free fall, listed as 200 feet in height, which is a very unique feature.
The American Dream will also be home to a large observation wheel, indoor ski slope, a full sized hockey rink, miniature golf, movie theaters and an aquarium. Oh, and plenty of restaurants and shops, of course
Click to expand...

The entire area will still look like trash. Been following the Xanadu project on and off for ages and it's never really impressed me. The concept art aesthetics will make it eye-catching from the nearby highways but it's not going to attract my business much. New Jersey really has been a mess with their major projects anyways, at least it has a better chance of happening than that F1 race.
You must log in or register to reply here.
Share:
Facebook Twitter Reddit Pinterest Tumblr WhatsApp Email Share Link
Menu
Log in
Register
Top