Who are you favourite musical artists? which album of their is your favourite? What is it about their music that you like?

I mostly listen to rock music, so most of my favourites are in that genre, but I also listen to Hip Hop/rap, pop and symphonic music.

It's difficult for me to really rank the artistes, but it is fair to say they had some sort of impact during a certain point in my life.


Nirvana
Perhaps a BASIC choice (one of many), but you can't deny the bands impact on rock music as a whole. Nevermind and In Utero opened the doors for me in terms of listening to alternative rock music as well post-punk and hardcore punk. Kurt had a very disorganised writing songwriting structure that just seemed to come together to make songs that had punk cred, but were also radio friendly. The whole loud and soft dynamic is what pulls me in, which also explains a lot of other picks here.

Best songs:
Scentless Apprentice
In Bloom
Come As You Are
Drain You
Tourette's

Best Album: Nevermind or In Utero (both are great)

Worst Album: Bleach (not a band album at all, it's actually good, but they only made 3 albums so it's by default)

Green Day
Admittedly I have a hard time listing them as one of my favourites considering the terrible music they have made in the last 10 years (That last album was a big yikes), with that being said this is the same band that put out Dookie and American Idiot as well as the less appreciated Kerplunk and Nimrod, Green Day was the band that got me into punk music, in terms of opening the door, they blew it right open for me, most of my most listened to bands are some derivative of punk music.

Slipknot
At First I wrote off Slipknot as a bit of a "joke" band, with their masked appearance and haunted house imagery, the first song of theirs I heard was Psychosocial back in 2010, from a Youtube coaster video no less. I rediscovered them about 2 years ago by watching a their 2009 download performance, it was a two hour video and I couldn't stop watching it when I started it. The band puts everything into their performance and you begin to understand the need for nine of them, it's not just about the music, which is brilliant, but it's about the whole package of what a band should be aiming for. They have the music, the imagery, they still after twenty years have a hardcore fanbase.

System of a Down
Who doesn't love chop suey? Toxicity is one of my all time favourite albums and their debut isn't far behind. This band were one of the most unique voices in the nu-metal scene, I can't think of a band that sound close to what they do, they just did there own thing and that is what I respect. The soft/heavy dynamic really plays here too.

Worst Album: Hypnotize (Not a band album, but not up there with their first few)

Deftones
More of a newer entry here, I didn't really care much for their music at first, but their sound has really grown on me. They have been dubbed the "radiohead" of metal, but I am not sure that is a fair assessment for both bands, but I suppose in some ways, Deftones are more what I want to hear, as I lost interest in Radiohead after Kid A.

Best Songs:
My Own Summer (Shove It)
Digital Bath
Passenger
Bored
Be Quiet and Drive (Far Away)

Best Album: Around the Fur

Eminem
I feel that after my teen years I need to include Mr Mathers here, like many his aggressive music with violent and comedic lyrics helped me deal with my angst years (I phase I think I am still in into my 20s) His first three major studio albums are all solid and are viewed as hip-hop gold, however after that he began to repeat himself and had less and less to say, now he raps fast. To be fair, I do think MMLP2 was a return to form, but he blew it with Revival and now with his last two albums he is somewhere in the middle of terrible and great.

Best Songs:
Stan
Criminal
Lose Yourself
Sing For The Moment
The Way I Am

Kanye West
"There is no karm-ye!" He is both a hack and a genius. In all seriousness as someone who has a close family member living with bipolar disorder, it is no picnic for anyone to deal with, I don't think we should hold him on a pedestal, but it's not healthy for him to be in the public eye right now. As for his music he has one of the most interesting and diverse catalogue's of any mainstream artist. Some music is great, some not so much, but I give credit for his efforts to change and evolve.

I've been through a few favourite bands/artists over the years. There's some I'll rarely listen to now who were my favourite at one point.

That's probably it, actually. Of course, I like a lot more music but I can't say anyone else has ever been my favourite.

I'm a musician so my idea of catchy differs from the norm -
Best ever for making the most of what they got- plus place in rock and roll history - plus quality of catalog- excluding obligatory mentions (Elvis, Muddy, Wolf, Roy Orbison) :
Pink Floyd
Rush
AC/DC
Stones/Beatles straight up tie
Zeppelin
Motown/Muscle Shoals era
Van Halen
U2
Nirvana
ZZ Top
Reggae greats - special mention Steel Pulse
The Police/New Wave greats
Blues Brothers

Mainly grunge and 90s with some older stuff thrown in.

I'm too lazy to put together a proper post, but I've just thrown together a Spotify playlist with a couple of tracks from most of my favourite artists; these are mostly the things that scored the full 5 stars on my iPod - and if you know me well, you've got a fair idea what to expect... 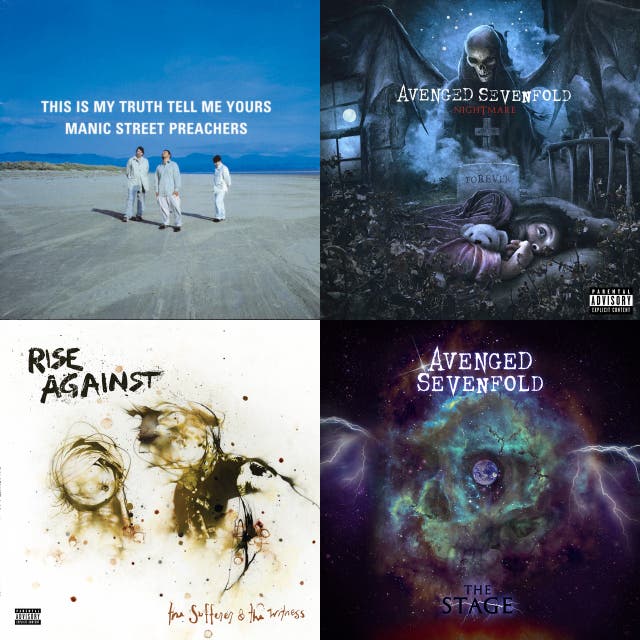