I wasn't quite sure whether to put this in the trip reports thread, but it seems that last year people ended up using this section for discussion and reports of events, so maybe as well chuck it here (mods feel free to move!)

Was really fortunate to attend the VIP preview night for Fright Nights last night as part of Thorpe Park Mania. With that pesky Covid thing, I've been a bit worried how the few open UK scare attractions would really feel, but having done every Fright Nights so far, it felt like a safe bet to see what the baseline is.

In general, the actors did a great job at social distancing. I believe that as much as possible they try to stay at least 2m away, but because they're all wearing masks and all guests are wearing masks, they can go up to 1m for short periods of times. Still a very different set up to how Thorpe usually do it (since they like to resort to touching and invading personal space as much as possible). Maze groups are of course just restricted to your household, so groups of 6 - much lower than the standard 12-20 they usually send you through.

For those unaware, Thorpe changed their line up a lot this year, going for just 2 mazes, accompanied by a lot of new scare zones, something which the park haven't really done.

Roots of Evil
The 'new' maze for this year, replacing Blair Witch. In all honesty, this isn't much different to Blair Witch. In fact, it seems to be the exact same layout as Blair last year, with the ever dense shrubbery and buildings too. The buildings have been rethemed to look like tree roots are taking over them.

I think Roots suffers from Covid restrictions though in a major way: actor numbers. Because of the dense forest area, there's not many place where the actors could interact with you without breaking social distancing. This means that in moments when you need there to be actors, it can fall a bit short. Many of the actors that are there are military personal to guide you through (because of the story), or covered in trees to blend into the environment.

The upside is that at points you do feel very secluded and alone. Mix that in with the household only thing, and that will get a lot of people on edge. Didn't do much for me personally, but the casual goer will love it.

Platform 15
The route has been reversed this year (I imagine, in part, to solve the problem of to achieve social distancing down a 100m long pitch black tunnel). This means the maze starts in the 'village' section. Not many actors and all a bit meh. You come to the old Thorpe Park train, which is now tipped on its side.

From the train, however, the actors did a good job. Quite a few hiding spots (including the old Love Island cabins which have been repurposed), and lively actors bashing against the metal walls. It's basic stuff, but it's the best they can do with what they have I think. And like this Roots of Evil, it will get people. The ending features a 'fake' ending (but the type where it's obvious it's not the end), followed by a group of actors along with a train effect. 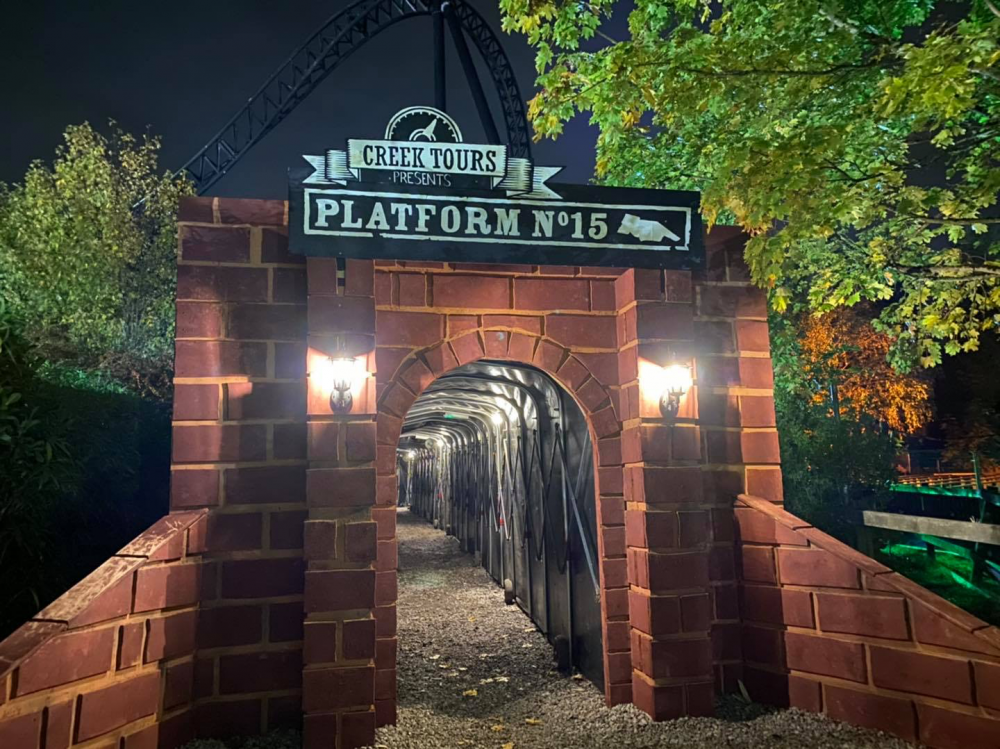 Put simply, the mazes aren't that strong. Roots of Evil doesn't have enough actors or suspense to be effective, and Platform 15 is too open. On the other hand, I don't know what else the park really could have done. None of their indoor spaces were suitable for mazes I believe (lack of ventilation and the like), and the outdoor mazes work around the restrictions in place as much as possible. It's very much a case of making the best of it out of a bad situation.

Thanks to only going within your group though, it means that the experiences are a lot more personal, and I think that again, more casual goers will be really unnerved by that. For the more enthusiastic people who have experienced many mazes, not so much, but for the wider audience, that'll be a big plus. Maybe doesn't justify the £10 uncharge for the mazes though.

As for the scare zones...
The Fearstival Arena. Taking place outside the Ghost Train, it's basically a group of carnival acts and freaks that creepily roam around. Lots of great character work, with a bit of humour mixed in too. Also has a stage where the actors sometimes perform a show, or where a mini fire show takes places. 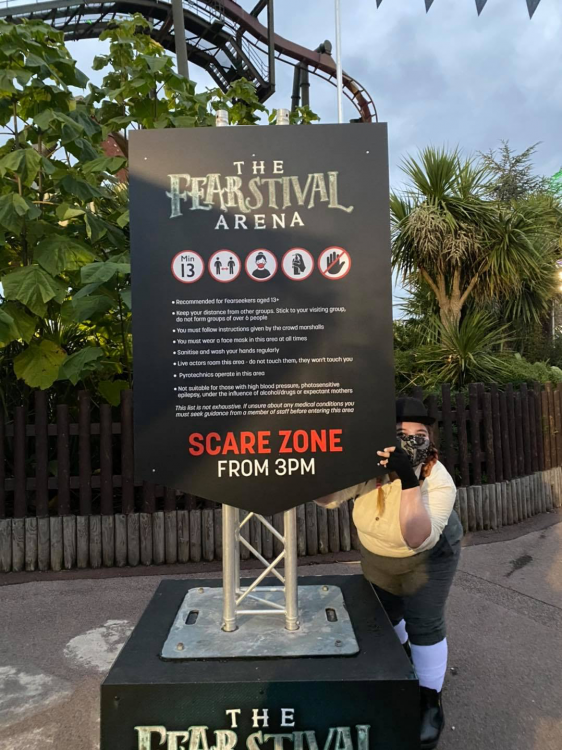 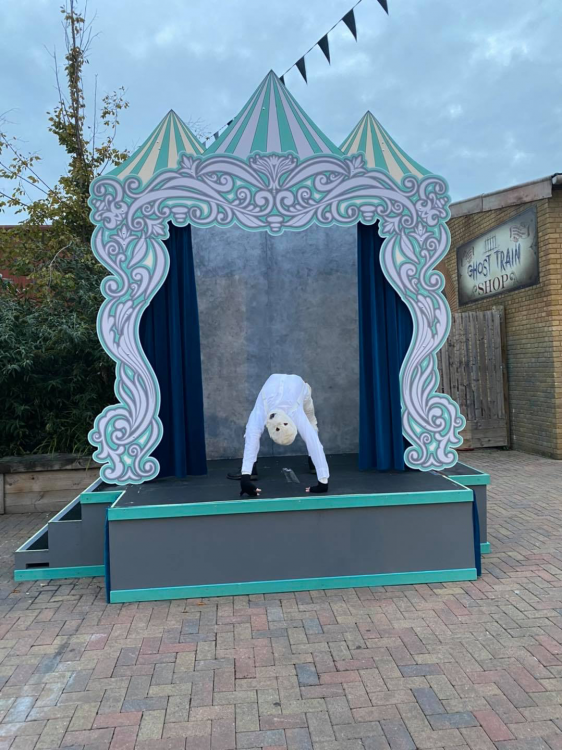 I was asked to join the carnival, but because I'm not this flexible, I would have to settle for being a bearded lady. I politely declined...

Creek Freaks: Unchained. The principle is the hillbilly like characters, the Buckwheats, from last's new maze have escaped and run havoc round the Old Town area of the park. It works more like a mini scare maze being a one way route and such. It's great fun though. 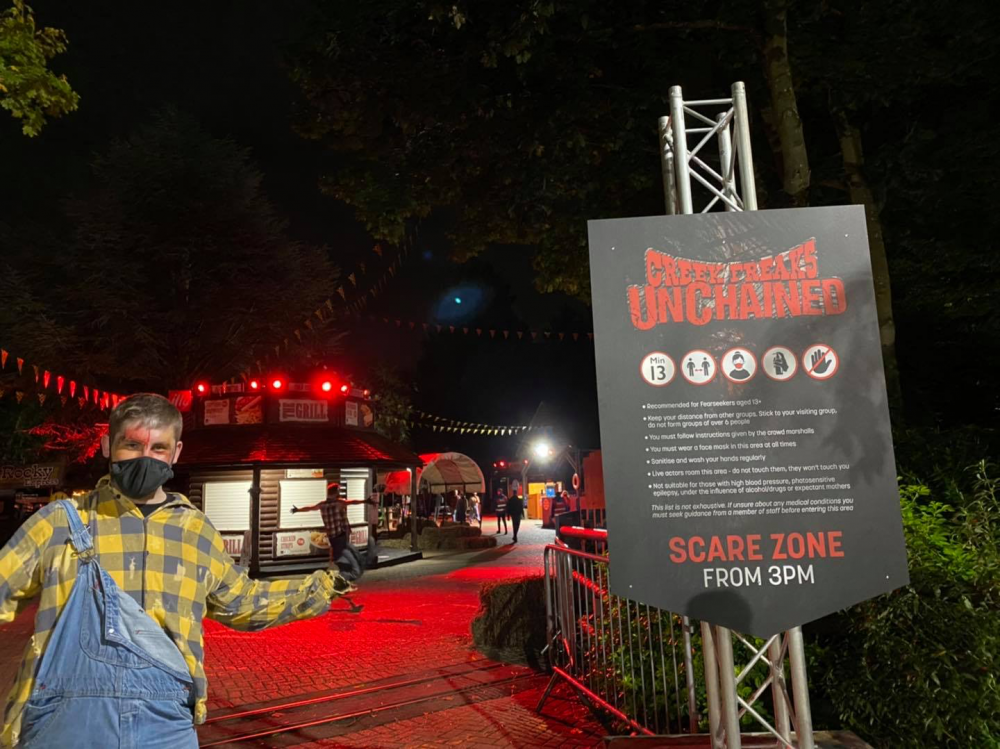 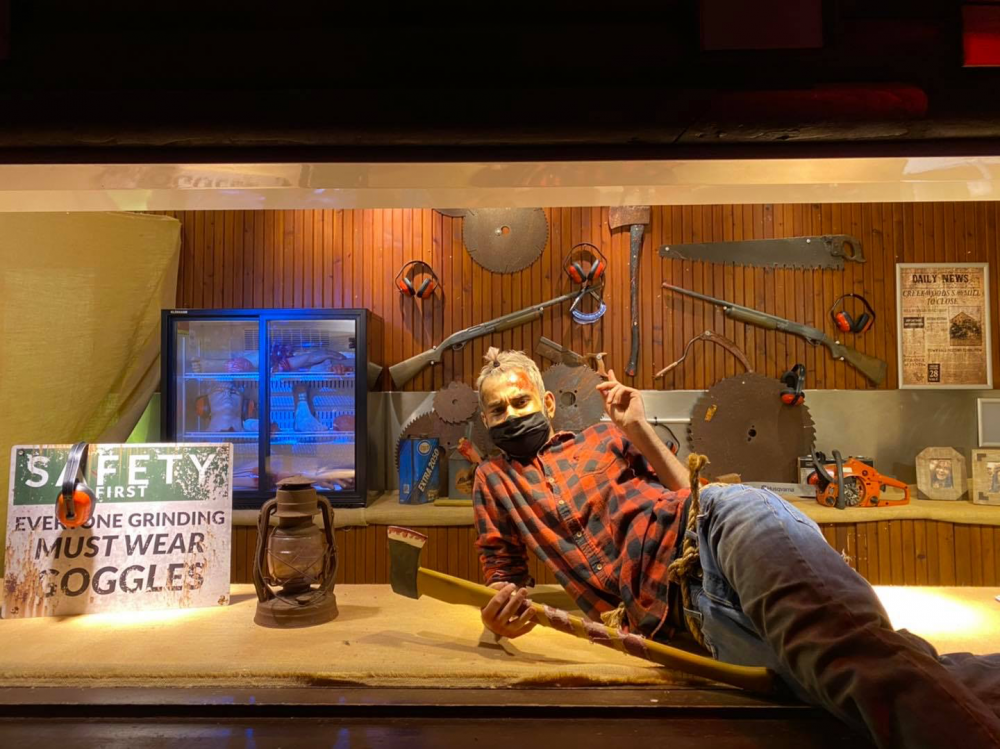 I may have been asked to join the carnival, but I think I'm a Buckwheat by blood
(NB - photo was taking socially distancing, despite it not looking like it..!)


Terror at Amity High / The Howling of LycanThorpe High. A flash mob show between two competing schools of vampires and werewolves, plus actors who roam around their own individual areas. Very similar to last year's show.

The Swarm: Invasion. A few military-like characters and conspiracy theorists (like the Lez Cougan character used in the build up to the ride) roam the area. Felt less like a scare zone and more just a few characters used to extend the story. They're very much take it or leave it - you could walk through the area and basically ignore them, or not even notice them, or you can take your time and really absorb everything that happens with them. 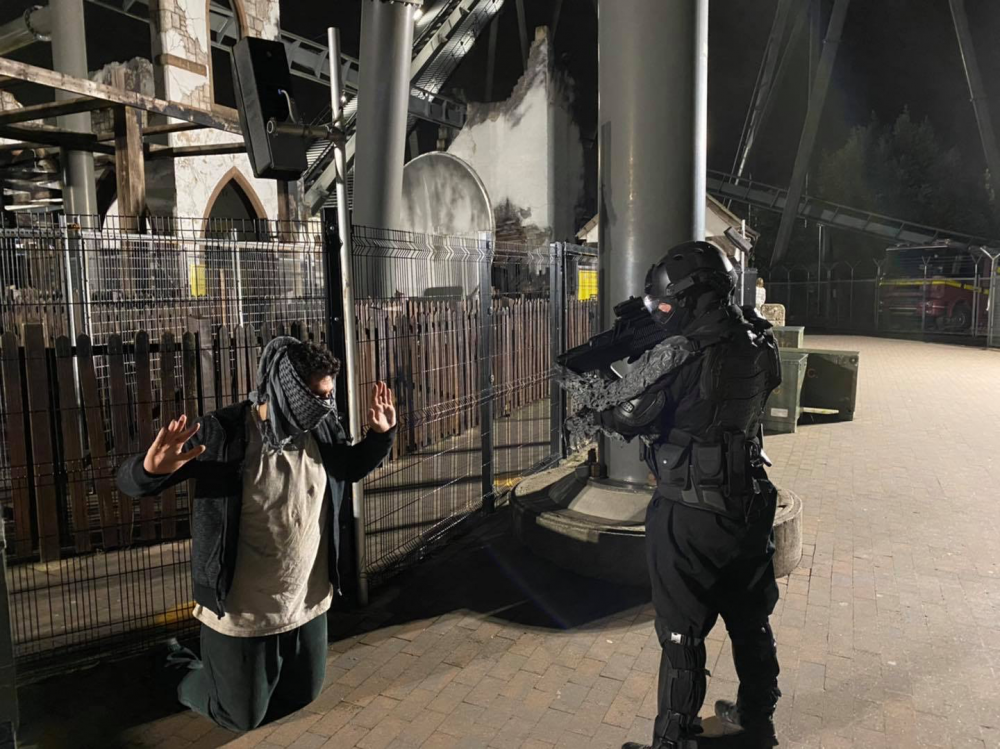 They also have some short horror films play in the 4D cinema (they're the same that have played the last couple of years, and they're terrible), which also has a mini introduction from some actors, as well as roaming scarecrows, which are brilliant costumes. 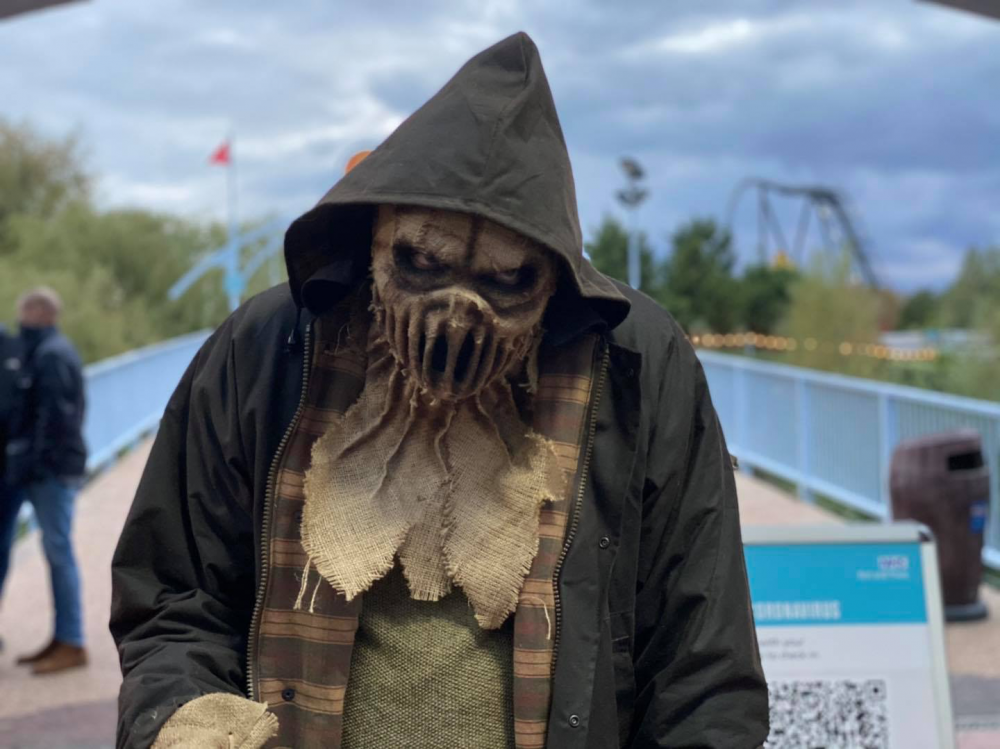 Genuinely great costumes - some of my favourites to come out of Fright Nights!

All in all, it's actually a decent Fright Nights event, thanks to the atmosphere that the variety scare zones created. The Covid situation really does seem to have affected maze quality, and I'm not really sure I'd want to experience a new-to-me event (or even a brand new-to-me maze) under the current circumstances. So Fright Nights will probably be my only scare event this year. But I'm okay with that, as it's enough of a little fix to bring something to Halloween. And I'm sure that for the wider audience, a lot of people will still really enjoy what the park have put out!

Thanks for reminding me about Lez Cougan. I liked that lore.

The crow costumes look incredible. My main issue with the last few Fright Nights has been how boring the costumes and characters are, 90% of the actors have ripped clothes, a bit of white make up or fake blood and that's it. And they either act possessed while giggling manically or are screaming for help, one of those two things is every actor encounter you get in a Fright Nights maze and I've never found it interesting or scary.

I remember in past mazes they had some interesting and threatening characters to mix up the scares. Stuff like the miners with gas masks and axes in My Bloody Valentine, the pig men in Saw, the swords and weapons in Studio 13, the ballerina in Cabin, etc. Seeing the detail of the crow characters this year gives me optimism that this level of immersion and menace will hopefully find its way into the mazes again.

Great write up Josh, sounds like a very fair assessment of the event. Glad you had a good night.

A good write up Josh, I went on Saturday myself and although I’m not actually a massive fan of scare mazes . I do every year go through Platform 15, because I like to see the train and for nostalgia more than anything else.

So here are my thoughts, Platform 15 reversed, was a very odd experience, but also brought back more memories of the Canada Creek Railway from my childhood as it now runs in the correct direction of the railway. The story element of the Creek Tours with the tour guide, that I’ve loved in the previous seasons, was understandably a lot shorter, but I was pleased that in the queue tunnel, the story element was present along with two safety reminders, so at least the backstory of the maze was not forgotten about. I did the maze four times, two of which I in the daylight hours with a friend and then two times alone at night.

For me personally the maze was very strong this year, the actors were very lively and being alone is a really adds to the scare factor.

The big question was it worth the £9 price tag for annual pass holders, for me yes it was, the maze was in my opinion the best it has ever been, and the new finale was absolutely fantastic, by far the best that Platform has had, but I did spent £36 for the train and so long as Thorpe does not get forced to close before the 1st November I will have also spent another £36 for four more trips through the maze just to see a locomotive on it’s side.

All of the free scare zones/roaming actors were very good, and it was nice to see that their was still a high offering of scares for free, and the event was very good given the state of the pandemic world that we are living in.