Woman Falls From The Texas Giant To Her Death

rollermonkey said:
If the light didn't come on, typically they couldn't dispatch the train. That's the whole point of onboard sensors.
Click to expand...

I was referring to the override feature we talked about before here. I recall somewhere (I want to say here) that we discussed that even though the light doesn't come on, sometimes they have an override feature that can still allow them to dispatch the train if the person looks like they're fine. I mean if they thought she was in securely even though the light wasn't on and still dispatched the train, it's Six Flags's fault.

The sad thing about this already sad situation is that I feel like we'll never really know what happened. Unless we can rewind and play back the moment that train was dispatched in the station, we won't ever know what caused this.
R

rollermonkey said:
If the light didn't come on, typically they couldn't dispatch the train. That's the whole point of onboard sensors.
Click to expand...

I was referring to the override feature we talked about before here. I recall somewhere (I want to say here) that we discussed that even though the light doesn't come on, sometimes they have an override feature that can still allow them to dispatch the train if the person looks like they're fine. I mean if they thought she was in securely even though the light wasn't on and still dispatched the train, it's Six Flags's fault.

The sad thing about this already sad situation is that I feel like we'll never really know what happened. Unless we can rewind and play back the moment that train was dispatched in the station, we won't ever know what caused this.
Click to expand...

One user said he did it in the UK all the time. Two of us who have extensive operations background in America said not a chance.

The parks I worked for in America would not allow a 16-18 year old making $8.50/hr to make a decision to ignore a safety warning and potentially harm a guest. Operating a ride is pretty mindless (push the green button).

If the train dispatched it was either clear, or the ride had a fault and was reading as clear when it shouldnt have.

We can know what happened, its called investigating. Just like you can recreate a crime scene based on factual information, they will do an "autopsy" of the accident and determine where, why and how this acciedent happened.

Also, most newer rides have cameras in the station, and around various key points of the track (like brake runs), I would assume NTG does as well.

Push to make sure the lap bar goes down as far as possible, then pull to make sure it's engaged properly. There are plenty of tricks riders do to make sure their bar is a little looser than it should be (I do it myself when I know I risk being stapled), but most attentive ride ops pick up on what stunts people try to pull.
Click to expand...

I know. I was being sarcastic because he repeated it a couple times.
F

I agree with BMAC's theory however believe that it's entirely a OP's fault as Gerstlauer has along with the park put up a requirements sign explaining that the restraint has to touch the thighs which probably wasn't the case - the ride OP has to check that before dispatching the train.
R

^^Twice in nine sentences was excessive to you?

Many times on Diamondback i have left an extra click for more airtime, and the ride op hasn't ever pushed it down so that it is tight. Now, it also isn't a big enough space that it could be a safety concern, so that might be why they don't push it down.

Staff member
Administrator
Moderator
While I'm not going to say it would be safe to ride without a restraint at all, the B&M hypers don't generate a massive amount of negative forces, so you're much less likely to be ejected with a loose/badly fitting restraint.

Not only that, but B&Ms is designed with the fact your feet are off the ground in mind. NTG and the Intamin hypers who've had issues are all designed to hold you at the thigh with legs bent at MORE than 90 degrees. The issue with the fatties is the bar not contacting the thigh, enabling them to outstretch their legs into a standing position when under negative forces. Then its basically a stand up coaster with no OTSR.

Staff member
Administrator
Moderator
Serious question. Are the Intamin and NTG seats flat? I know the B&M and Mack seats are buckets that "cup" you so your thighs are pointing upwards.

As the restraints come down, it means they always clamp the thighs. I guess (as Joey is saying) that if the seats aren't buckets and are flat, the restraint just isn't as effective?

All coasters with enclosed, floored trains that your feet should contact are not as bucketed as those without. I think.

I'm trying to imagine this and struggling, but I would guess its a space/ease of getting in/out issue. Or perhaps, due to where the lapbar stems from, it would reduce the window of sized people who can ride further by not coming down low enough on those who are tall or hitting the chest/belly of those shorter depending on the length if the lapbar reach. Anyone else see what I'm imagining?

There must be a reason either way.

Staff member
Administrator
Moderator
It could simply be that it reduces the length of the train, or allows more seats per train?

B&M don't care because they're four across, so can give each ride a larger seating envelope. Mack produce rides so efficient, it's also fine.

B&M seats are really deep and quite laid back:

Compared to the Intamin and Gerstlauer ones with lapbars that have thrown people: 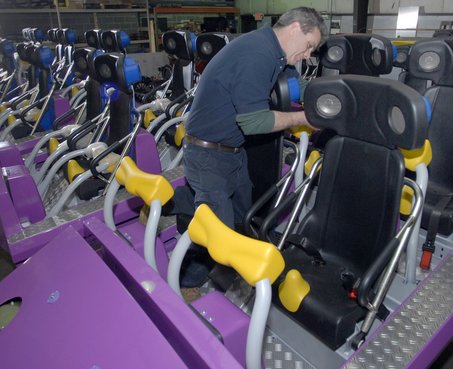 You can see that they have a much more "sit upright" position than the B&M ones. Even Skyrush still has this posture enforcing position:

Which seems weird as Skyrush is four across so Intamin should have had more room.

It's apparent how much more room there is in the laid back seat coasters when you look at people riding them (and Skyrush certainly does have more leg room - it's an exception :lol: )
B&M - while people may have their legs bent at the knee, they CAN swing their legs forward:

Mack too, you can see the room (just about) the rides have. Front seat doesn't give much more room than the others - but people are clearly comfortable: 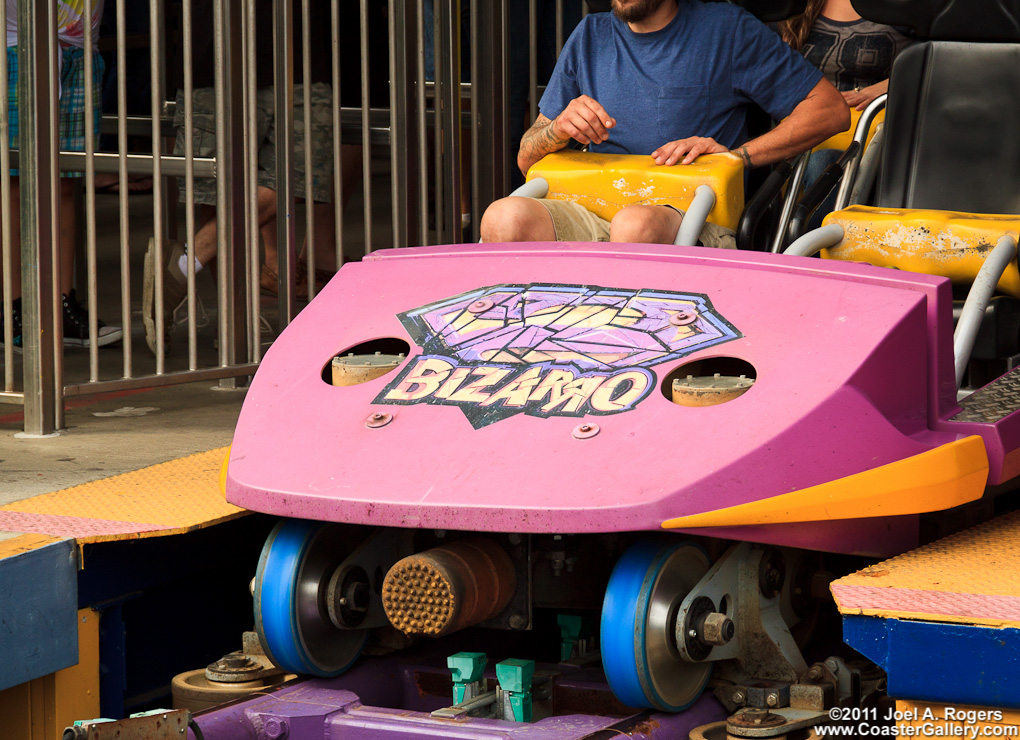 Looks like maybe he's just sitting awkwardly, but I know from experience, that's how you end up because your feet hit the seat in front. This image shows it clearly (you can see how close the lad's knees are to the seat in front):

To be fair, NTG looks like it has a bit more leg room, can anyone confirm?

Not sure what the point is, other than I think at some point, there's been a compromise between fitting in seats and restraint/seat design which hasn't worked out well for certain people.

I think it's unfair to compare the B&M clamshells though as the rides don't offer the same levels of forces you get from the Inamin rides and NTG. However, for me, the Mack design is in essence the same as B&Ms (a slight evolution) and it holds people in through inversions perfectly well and comfortably.

I'm sure it's all down to the lack of reclined seating at the base of this issue with the rides ejecting riders of a certain body type.

I think you may well be right.

furie said:
To be fair, NTG looks like it has a bit more leg room, can anyone confirm?
Click to expand...

Not quite. While there is leg room, on the front of each car there are bars that restrict one's leg movement (can be seen well in this picture furie posted)

If you look towards the bottom of the picture you can see those leg bars. Since there is open air between each car there is that bar to ensure nothing could get caught (I can verify that since this picture has been taken the bars are still there but the open space between cars have been covered by red nets similar to the pockets you can stick your stuff in). The seats are roomy and very similar to the B&M seats you compared them to, and the angle at which the picture above sits, it looks like the seats are in a very upright position but they are actually very free and you aren't restricted in terms of posture. It's a very relaxed leaning back when you're in the station.
R

You would never survive training, let alone a week of working at a park.

Friends of mine who were ride ops described being a ride op as the warning spiel the tramcars blare in Wildwood.
P

Youtube just recommended the following video to me. Others have probably seen it before? It's clearly based on the Superman accident years back...

^I think that vid was posted a few pages back

You would never survive training, let alone a week of working at a park.
Click to expand...

Good thing I don't want to work at a park. If I did, I would fear ending up like you.
E