Hi guys. Today, my parents and I headed to Thorpe Park; they had given me this trip as a present for my 16th birthday on Wednesday! It was an 8pm close today, so we left quite late and arrived in the park at just before 12pm with the intention of staying until 8pm. However, as you’ll discover later on, we didn’t need to stay until 8pm due to an unexpectedly quiet Thorpe Park! The car park wasn’t anywhere near full, and we arrived 2 hours after park opening! After a speedy entry process, we were through the gates, and I could admire Thorpe’s impressive skyline as we walked over the bridge: 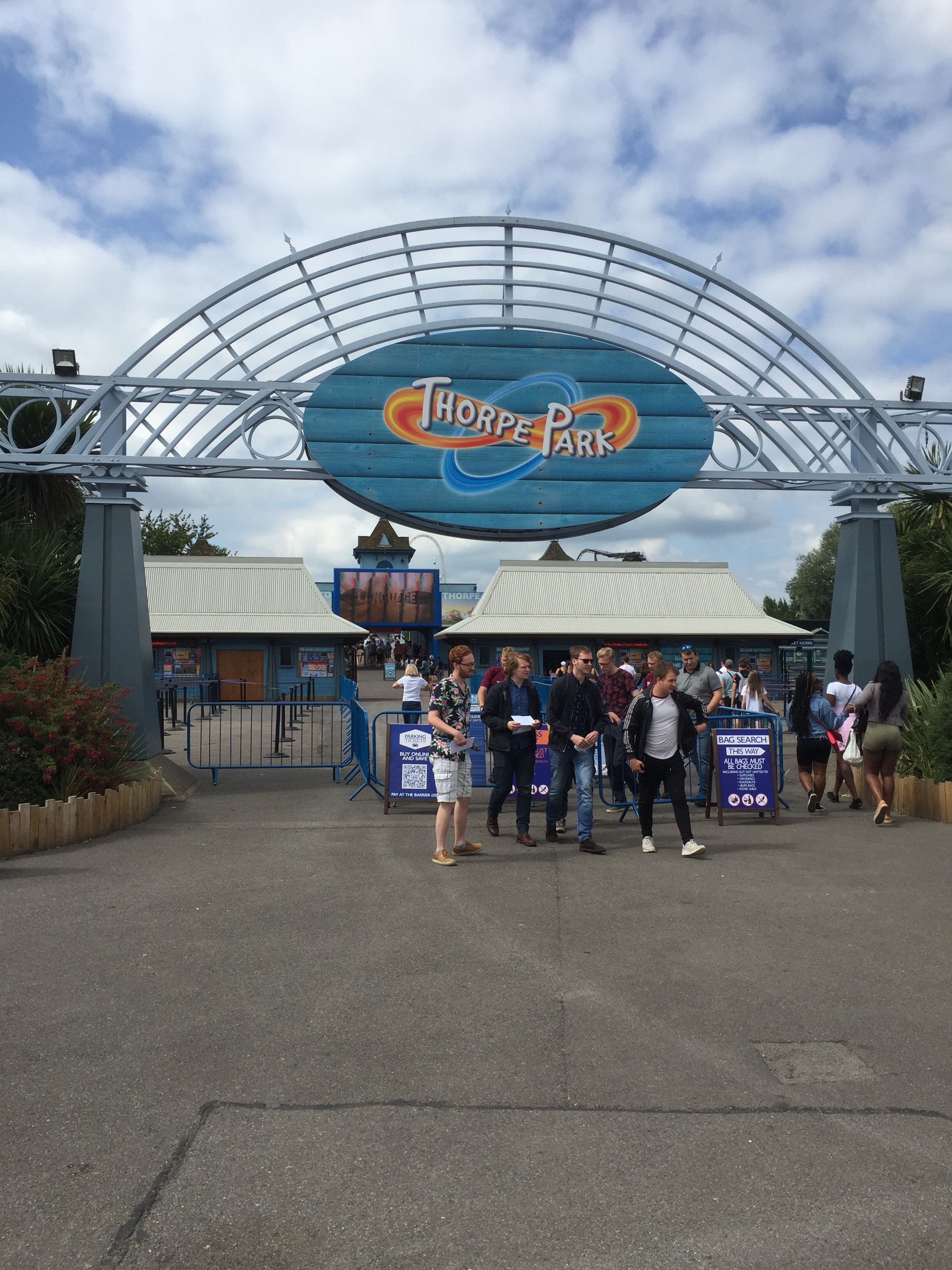 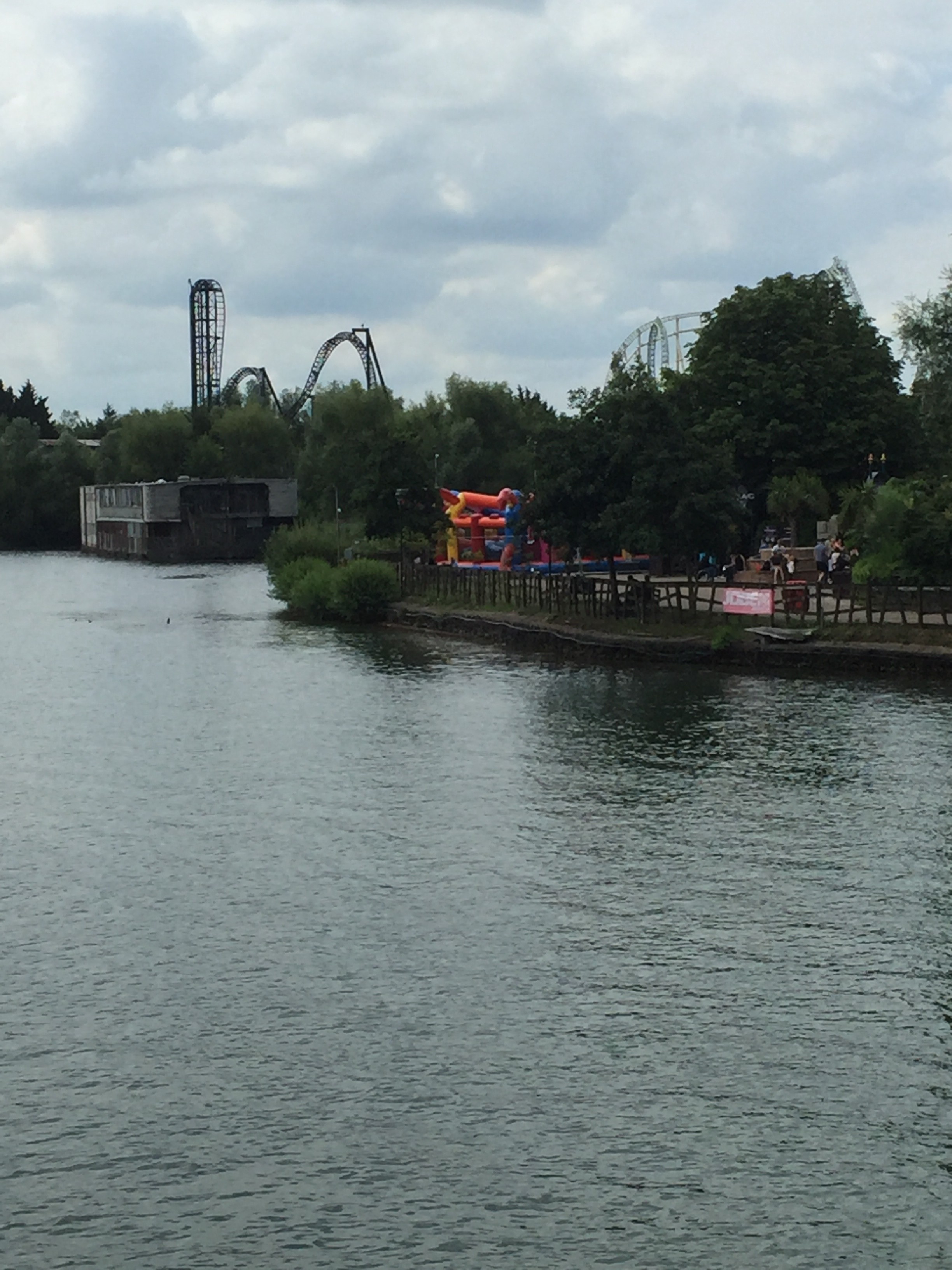 We then headed to our first ride of the day; a particular favourite of mine...
The Swarm
The Swarm had an advertised 15 minute queue, so we joined it. However, the ride was pretty much walk on, so we were on in no time at all. So, how was the ride? Well, I sat in row 2, and I enjoyed The Swarm even more than I’d remembered and I loved it to begin with! It’s such a smooth, enjoyable coaster with just the right amount of force for a thrilling, yet enjoyable ride! I enjoyed it so much, in fact, that I’d now say it’s my number 3 coaster behind only Mako and Icon, as well as my favourite ride at Thorpe! My parents enjoyed it a lot too: 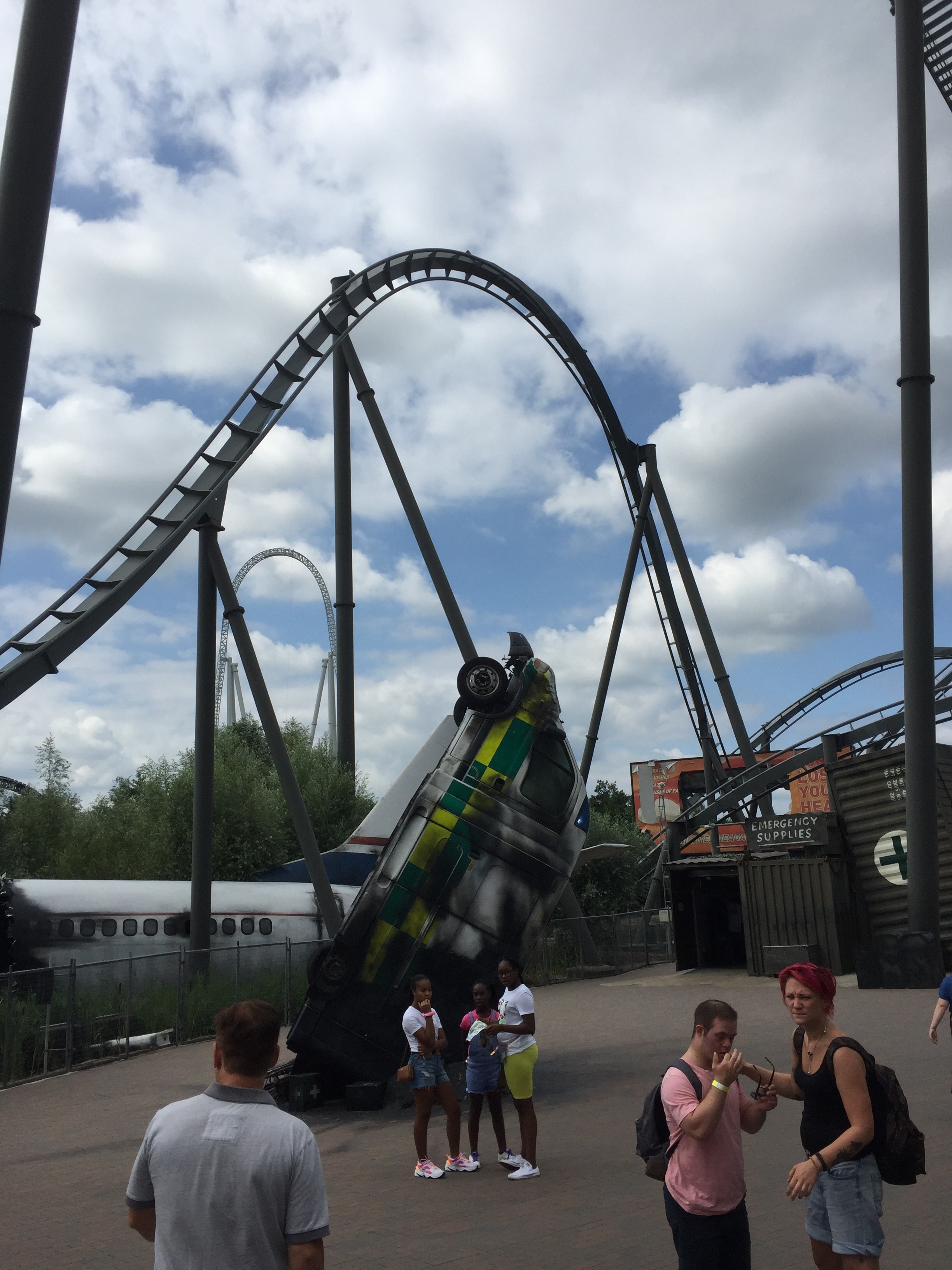 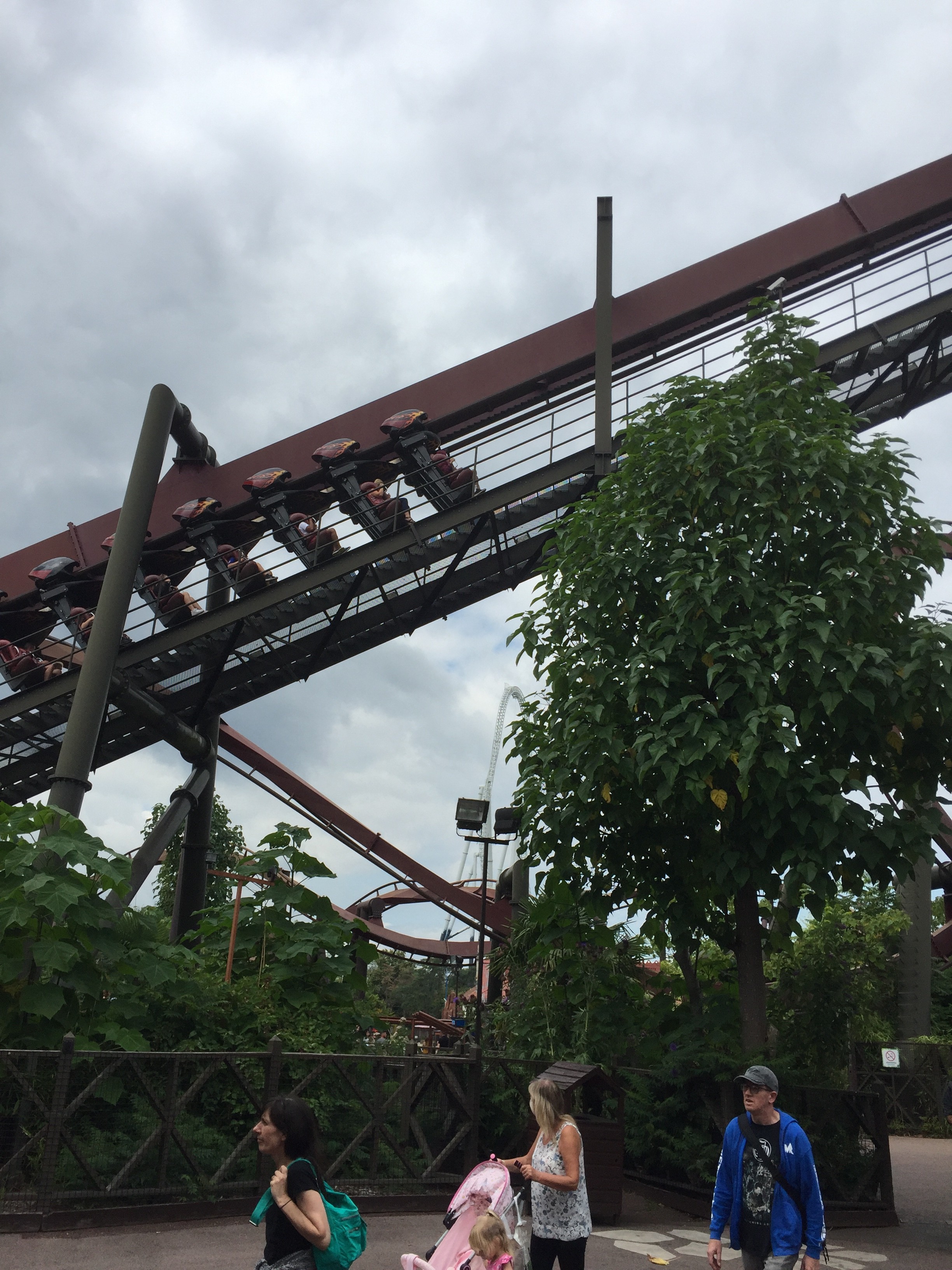 After our great ride on Nemesis Inferno, we headed to...
Colossus
Colossus was on a 20 minute queue, so me and my mum joined it. Now, I was interested to reride Colossus, as I’d heard multiple reports that the ride had gotten smoother, and it had been 5 years since my last ride, so I was hoping that I’d look at it a little more fondly than I previously had. So, how was the ride? Well, I’m afraid to say that I’m still not a fan, nor was my mum. There was still quite a bit of headbanging, and I forgot how tight the cars were to get into. It’s a shame, as I actually don’t think the layout is a bad one at all. I just find that the roughness hampers my enjoyment of Colossus quite a lot: 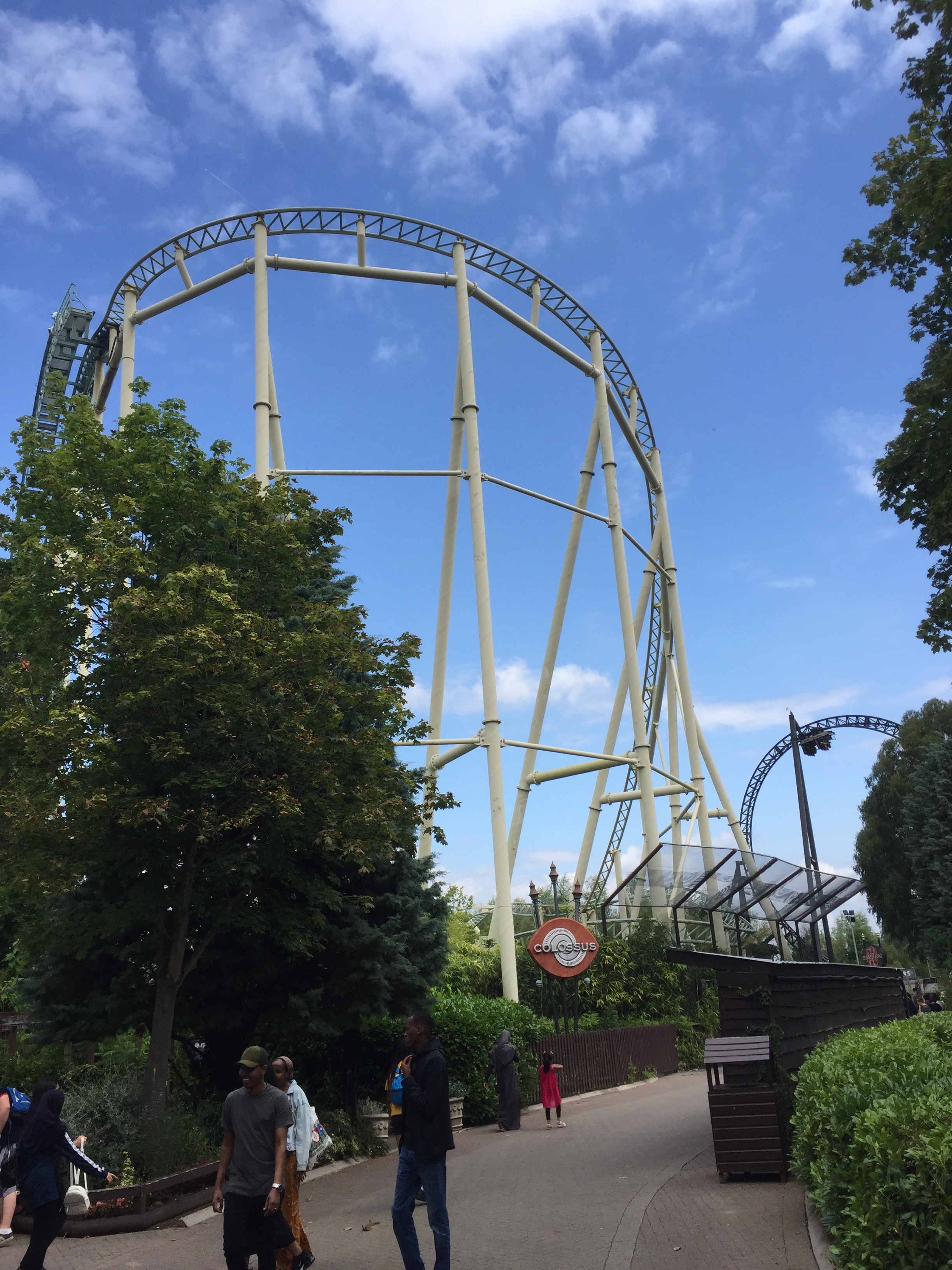 So, after our ride on Colossus, me and my dad headed to ride...
Saw: The Ride
Saw was on an advertised 21 minute queue (extremely precise!), so me and my dad decided to give it a go. When we got into the queue, this increased to around 40 minutes. So, how was the ride? Well, I wasn’t huge on it last year and I’m still not huge on it now. I think the layout is actually quite good, but there are too many rough moments for me to fully enjoy it. I must admit, the section between the Immelmann and the MCBR was a little smoother than I’d remembered, with only a couple of rough moments, but the Immelmann was quite rough and the ride went downhill (both literally and figuratively) after the MCBR; that dive loop and turn into the brake run seemed extremely rough and almost a little too intense for my liking. My dad loved it, but I personally found it a little too rough for my liking; perhaps Gerstlauers just aren’t my sort of ride?: 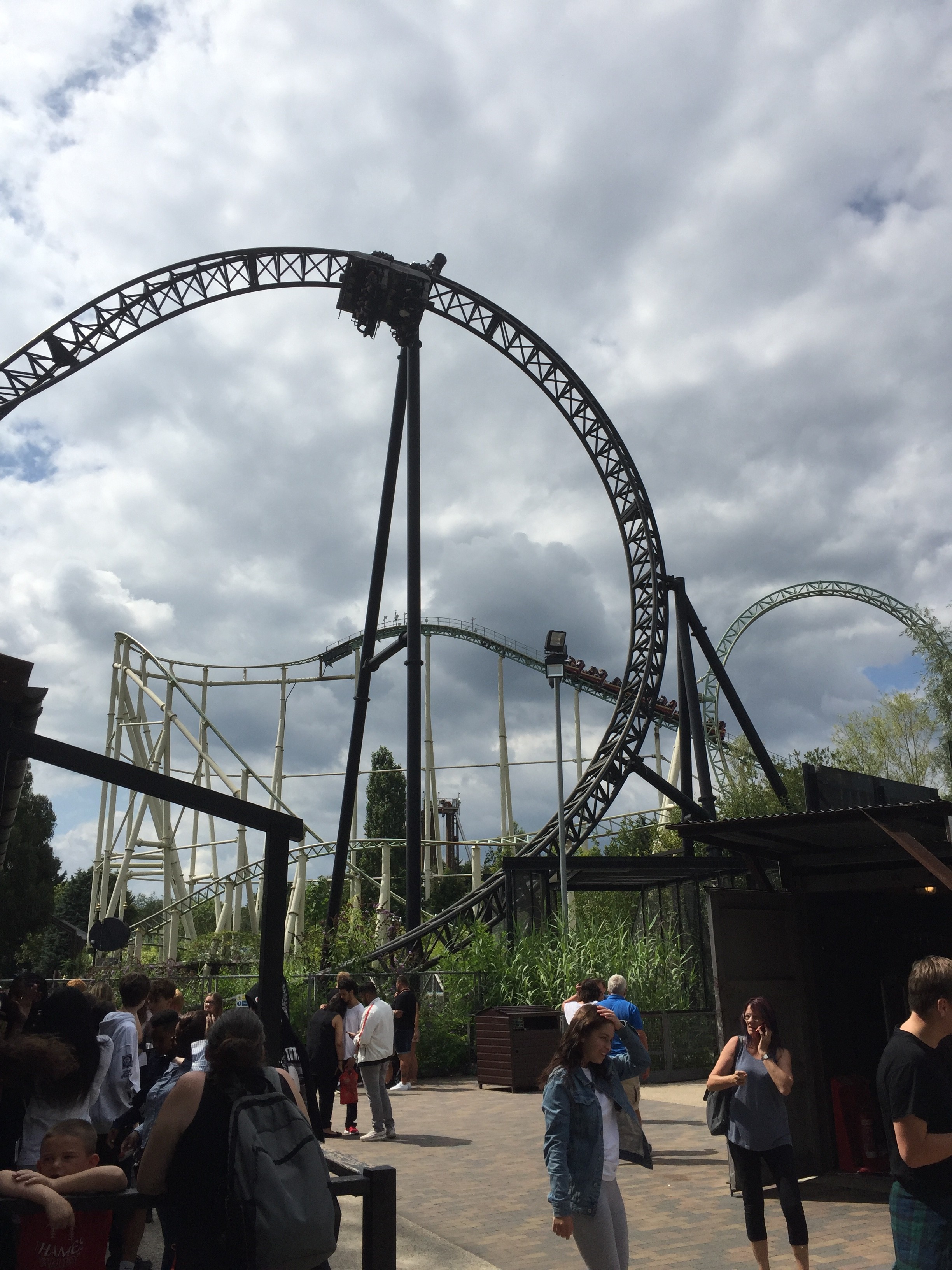 After Saw, we met back up with my mum and we all went to ride...
Stealth
Stealth was on a 15 minute queue, so we joined it. We were seated in the very back car for this ride on Stealth, and I personally rather enjoyed it! The launch was a huge rush as always, and I even got a rather good pop of airtime out of the top hat! Overall, I do have a soft spot for Stealth; it may be short, but it sure is sweet! Neither of my parents liked Stealth, however; my mum is convinced she finds it too terrifying and my dad was hurt by the restraints.

After our great ride on Stealth, my mum fancied a few gentler rides, so we firstly went to ride...
Rumba Rapids
Rumba Rapids was on an advertised 15 minute queue, but it was practically walk-on, so that was a bonus! So, how was the ride? Well, I remained dry, but my dad got a light spray on his back and there were a couple of other people who got a light sprinkle, so I wouldn’t say it was a bad rapids at all!

After Rumba Rapids, my mum fancied a ride on...
Flying Fish
Flying Fish was on an advertised 15 minute queue when we joined, but in reality, it was far less than this. Me and my mum sat towards the back of the train, and while it of course wasn’t my favourite ride by any means, it was perfectly fun for what it was and had some light whip towards the back! Overall, Flying Fish was a fun little ride that me and my mum both liked: 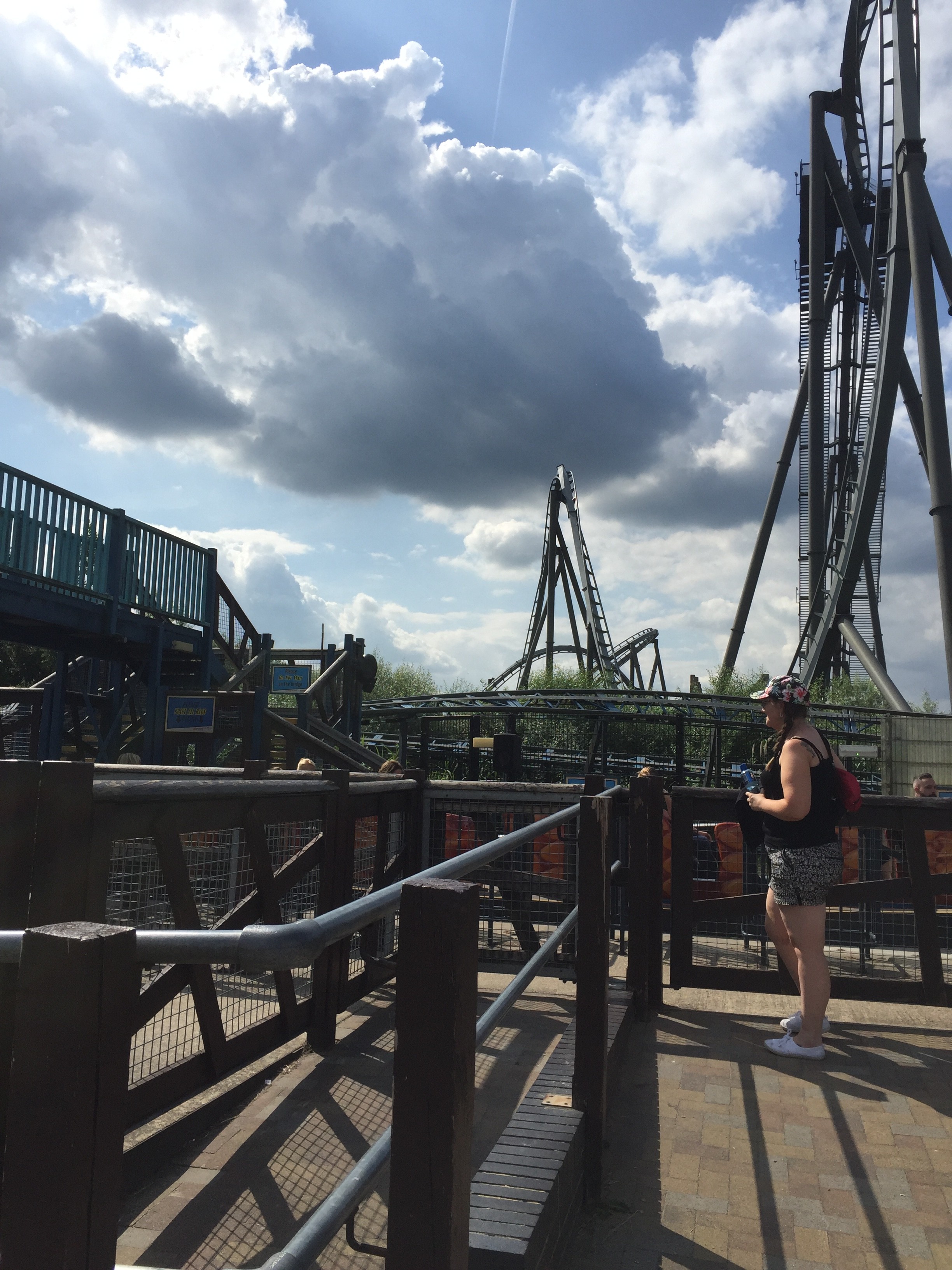 After Flying Fish, we headed to The Swarm for two back-to-back rides; both were just wonderful! It is such a fun, rerideable coaster!

Me and my dad then had another great back row ride on Nemesis Inferno before we initially headed to ride Storm Surge. The ride was on an advertised 30 minute queue when we arrived, but sharply rose to 90 minutes, so we left. I instead headed on my own to ride...
Rush
Now, Rush was on a mere 5 minute queue, so I thought it would be a good ride to go on! The park’s S&S Screamin’ Swing was one of 2 attractions I experienced on a school trip to Thorpe Park last year, and I remembered rather enjoying it, so I thought I’d try it again. So, how was it? Well, it was better than I’d remembered! There were some great forces in the lower sections of the ride and some fun pops of airtime at the top of the swing! Overall, I thoroughly enjoyed Rush, but my parents looked glad they didn’t go on it, as neither of them like flat rides: 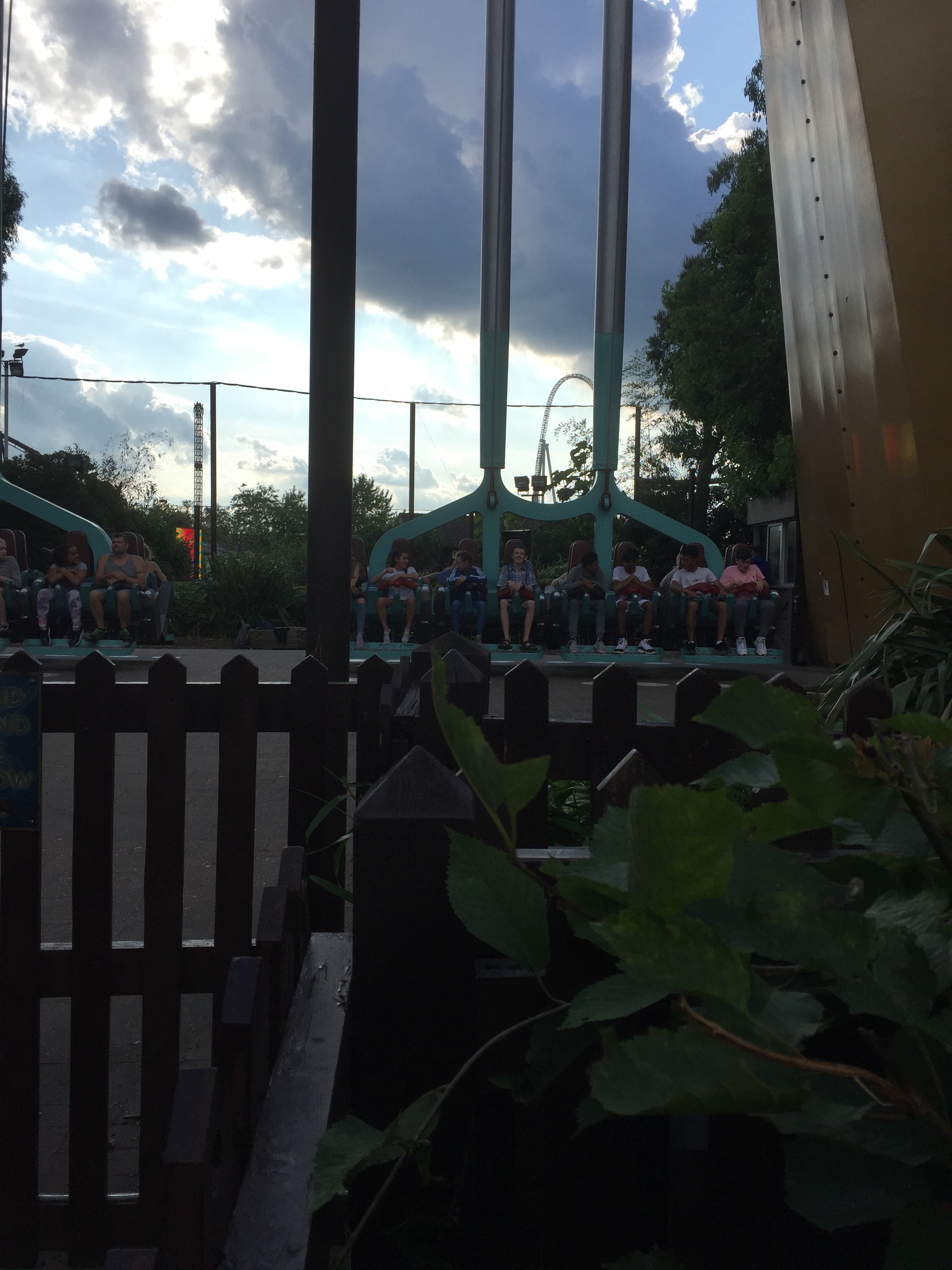 After that, we headed to Amity Cove for a lovely Burger King meal. We then intended to leave, but I fancied squeezing in one final Swarm ride, as it was on an advertised 10 minute queue. However, the area had emptied out massively and me and my dad just waltzed straight onto row 6! That ride was my favourite yet, and definitely reaffirmed The Swarm’s place as my number 3! After that, we actually left as we’d originally intended...

So, in conclusion, I had an absolutely fantastic day at Thorpe Park; probably my favourite visit I’ve ever had to the park! I absolutely loved getting on so many rides, and I was thrilled with my final ride count of 12! If you’ve lost track, I rode:
I’d call that an immensely successful day, and I could have kept on going if my parents had wanted to! We ended up leaving at around 7pm after a wonderful day at the island like no other!

Thanks for joining me for today’s report from Thorpe Park; hope you enjoyed it! Join me at the end of the month for a spot of Late Night Riding at Blackpool Pleasure Beach!
P.S. If you’re wondering what the random gaps are for, pictures are coming shortly.
Last edited: Aug 2, 2019

Oh there's definitely a Gerstlauer for you out there somewhere. More to life than Eurofighters.

Nice report. Glad you got a redemption day after that God awful sounding school trip.

HeartlineCoaster said:
Oh there's definitely a Gerstlauer for you out there somewhere. More to life than Eurofighters.
Click to expand...

Perhaps one of those new Infinity Coasters that are allegedly very smooth?

Benenen said:
Nice report. Glad you got a redemption day after that God awful sounding school trip.
Click to expand...

Thanks! I was really pleased with crowd levels yesterday; to tell you the truth, I was expecting the park to be rammed, what with it being the summer holidays and everything!

In total, I got 6 times the number of rides in that I got when I went with my school! Swarm was practically walk-on for most of the day yesterday, whereas it was 80 minutes when I went with the school! Pretty much everything major had a queue of 90+ minutes, and that's why I only ended up riding Rush and Samurai! Ah well, that day was certainly better than nothing, and as you say, yesterday's visit made up for it; first time I've ever ridden every Thorpe thrill coaster in one day!
Last edited: Aug 3, 2019

Matt N said:
Perhaps one of those new Infinity Coasters that are allegedly very smooth?
Click to expand...

FireChaser Express could legitimately be the best thing they've made. Their bigger coasters are all weird - good, in places, but weird. FireChaser is just really really well done.

Glad you had a great day - and that your parents will ride coasters. Happy Birthday.