Anyone heard anything about the park's future? who won the bid ti run it?

The last update I can find is that the seals (of criminal investigation) to the park were removed last week. The area around the park is currently closed because of the pandemic. My best guess is that the whole process has been postponed.

Most recent update is that the proposals period has been extended due to Covid 19 and apparent lack of time spent on the project so far. 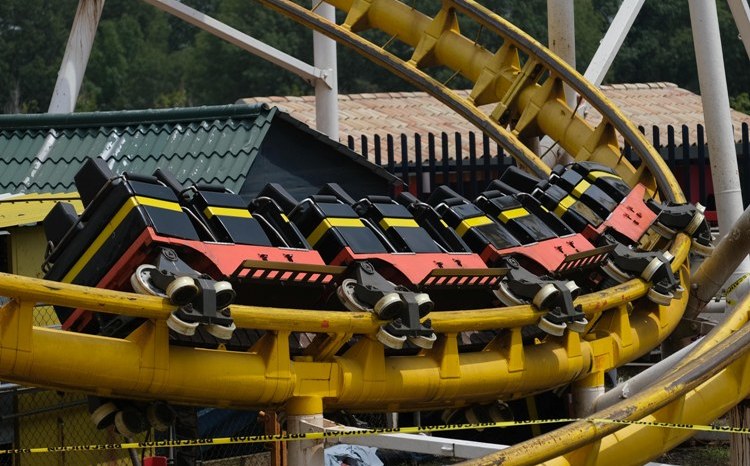 It’s awful what happened, but do you think Quimera will ever operate again?

adrenaline1996 said:
It’s awful what happened, but do you think Quimera will ever operate again?
Click to expand...

Honestly, I think if it is going to stay at this park, then no, but I feel it could get relocated after the park puts it up for sale


My Spanish is very rusty, but from what I can gather form the article as well as replies from those who were able to better summarize the article, it sounds like the old operator has begun pulling their rides out of the park. Fear not though: the land and larger rides/landmarks are owned by the city, and it sounds like they have resumed the search for a new operator. Interestingly, there does not appear to be any mention of Quimera's fate yet.

Sounds like dismantling of operator owned rides and stalls has begun:

Still, there doesn't appear to be any word on Quimera's fate.

Seems both articles are stating pretty much the same thing. Hopefully the new operator presentations can happen soon.

Translation of the main points:

1. The ride Quimera operated outside the norms established on it's own manual, official mexican norms and complementary technical norms.

2. According to the ride's manual, the rollercoaster was operating without the required conditions, as it was functioning with 5 cars instead of 6, with no corrective maintenance and under seriously unsafe conditions.

3. The lack of proper maintenance was the cause of the derrailment and subsequent fall of car number 5, causing the deaths of two people and serious injuries on other two.

Causes of the accident

The General Attorney's Office will prosecute the people responsible and/or the company under the charges of culpable homicide and injuries. Once the legal procedure begins, they will release a list of those accused.

The manual that the company used to operate the ride was not the original, the used incomplete copies of the technical specifications translated to english and spanish.

The Attorney concluded that Quimera operated under seriously unsafe conditions such as poorly maintained seatbelts, oil leaks on equipments, fissures on the wheel trucks, broken screws on the track joints and damages on the rails.

"Loop number one showed excessive movement, all three loops required leveling, the operator's display had failures that had been reported before, and the routine technical inspection of september 29th (the day of the accident) determined that the ride had a reliability of 58%, because of that, the coaster should not have been opened to the public until the failures were corrected.

How the accident happened

According to the Attorney's Office, and based on the maintenance log, the roller coaster was not in condition to operate safely.

"The prevailing conditions originated excessive vibration in all of the ride's elements, causing the screws of the right wheel truck on the last car to fall off and therefore causing the whole right set of wheels to derail, the train followed it's path because the left truck was still in place, but when the coaster turned right, the last car derailed completely and became airborne, pulled by the speeding train until it hit the support structure, the hit snapped the last car off, which started spinning while falling, throwing the two now deceased passengers to the ground"


La Feria is looking to perform it's own investigation with the help of a foreign expert, but according to the Attorney's Office, the company has not followed the proper legal protocol and therefore, no official request has been fullfilled.
Click to expand...

Pierre said:
Careful what you say before a certain cretin wades in off his own site telling you you are NOT QUALIFIED TO MAKE SUCH SUGGESTIONS!
Click to expand...

The first few pages of the discussion on TPR made me raise an eyebrow or two at the hypocrisy coming from a particular member.
I remember this person saying the same thing to me a while ago as well as something along the line of "what do you know about rides?"
The next day he looked a little sheepish and avoided eye contact when he saw me doing a rather detailed inspection of a ride he was due to review before the park opened.....
S

Fascianting the coaster operated for over 10 years without a major accident with only a partial translated maintenence manual and with the non-standard shortened trains ?

The shuttle loop from the park is up for sale, hopefully it goes to another park as I think these are still great coasters and at $490000 it’s not to bad.

Mingo eyeing up its next £20m attraction then?

Tonkso said:
Mingo eyeing up its next £20m attraction then?
Click to expand...

If the shuttle loop is up for sale, I can guess, with at least some certainty, that La Feria is now closed for good.

Quimera is being taken down.

SilverArrow said:
Quimera is being taken down.

Coaster Chall YouTube said:
Definitely interesting that it isn't a scrapping job so hopefully it can find a new permanent home
Click to expand...

I hope this is the case as this ride is a monster, but these photos seem to all be from when the ride was assembled, given that the loops are dark/blue. I am withholding hope until I see photos that are clearly of the dismantling.

On a side note, the shuttle loop is no longer listed for sale.

Indy said:
I hope this is the case as this ride is a monster, but these photos seem to all be from when the ride was assembled, given that the loops are dark/blue. I am withholding hope until I see photos that are clearly of the dismantling.

On a side note, the shuttle loop is no longer listed for sale.
Click to expand...

Yeah I see what you mean. I think the source is quite local so presumably is relatively reliable.
Last edited: Nov 17, 2020

Staff member
Administrator
I can see it making a return to the German fair circuit a la Laser/Teststrecke. Too many Kirmes companies/families waiting for a opportunity like this.
S

The German showmen at the moment try not to go bancrupt. Except for some small "temporary themeparks" nothing happened here this year. Many rides are feared not to return next year - no one is talking about new rides ☹

Normally this would depend on the condition of the ride. Skyline Park once tried to aquire Thriller but they cancelled that as the ride was in desolate shape. Cannot see that this one is much better. With Laser Dorney did the maintenence according to the manufacturers schedule and ran it according to specs.
You must log in or register to reply here.
Share:
Facebook Twitter Reddit Pinterest Tumblr WhatsApp Email Share Link
Menu
Log in
Register
Top