Thank god for those renders, I was dying to see what the endless concrete walls looked like from another restrictive angle, and now we can!

so they painted the yellow details black now?

In the meantime, the second floor of the curved section with rooms has been installed. The large crane was removed yesterday.

And a drone was spotted above the site. Whether this is from Phantasialand itself or whether we will again see illegal footage is unknown.

JoshC. said:
Can't wait for the wall to start being built. It's been too long since we've had daily wall updates to foam over.
Click to expand...

Jokes aside, it does look quite tall doesn't it? The coaster itself doesn't really go over the building you can see in the front.

I suppose that the area will be completely sorrounded by theming/walls. It‘ll be so amazing! ?

So, you think this is the wall?

roff said:
Jokes aside, it does look quite tall doesn't it? The coaster itself doesn't really go over the building you can see in the front.
Click to expand...

That will hopefully be the strength of Rookburgh: feeling small in a large, high environment.

A video from Monday:

I was today at phantasia as well. What a great day it was! I shot a photo in the morning and in the evening. They did a lot! Maybe a new entrance? It looks like an arch. (Sorry the website turned the last pic)

Brian said:
I was today at phantasia as well. What a great day it was! I shot a photo in the morning and in the evening. They did a lot! Maybe a new entrance? It looks like an arch. (Sorry the website turned the last pic)
Click to expand...

Maybe the entrance for the hotel??
D

Currently, most assume that the entrance will be on the left. There would also be room for a small driveway.

Also spotted at the park today. 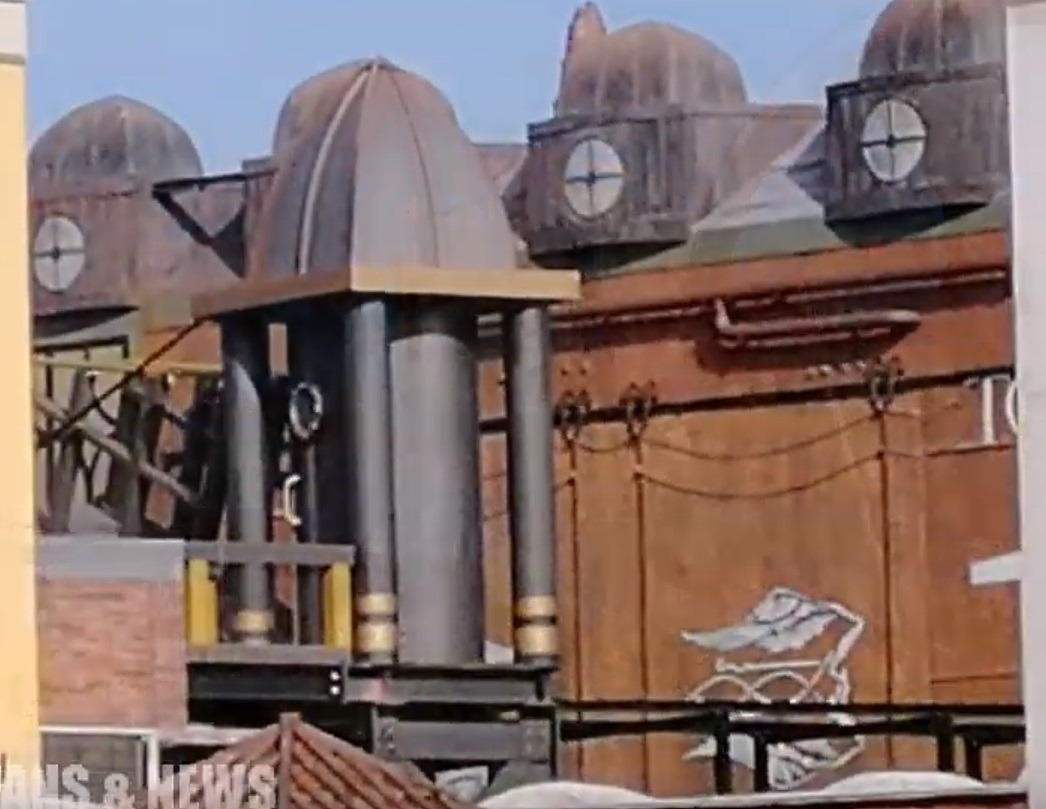 A lot of the scaffolding on the sound barrier wall along Maus au Chocolat has been removed as work seems to be done with lots of theming details like pipes, ropes, pulleys, rollers for the faux gates etc. having been added.
Screenshot from the above YouTube video


CoasterCrank said:
Maybe the entrance for the hotel??
Click to expand...

Would imagine they are just trying to create an impressive façade to the park exterior as well to blend with the actual hotel entrance building to the left.
Matamba and Ling Bao have their large eye-catching imposing buildings to be seen from outside - while Charles Lindbergh would otherwise not have such an exterior profile since the actual hotel buildings are within the area itself.

These graphics from Tobi on PhantaFriends.de have already been posted but just to add some more context - Tobi's first graphic obviously depicts Towers 1, 2, 3 + 6. He notes that they've really made the hotel fit around the coaster track and made very good use of the clearance envelope with how closely interwoven they are.
As of 11th October when he made these he believed there to be 78 rooms made out of prefabricated concrete parts already installed (at least 6 more have been added since I believe). Additionally there are 3 other rooms not built in this style which he thinks will also be hotel rooms.
Given the hotel is nearing completion Tobi makes a safe prediction that there should be 111 of these rooms, plus the 3 other rooms - so Hotel Charles Lindbergh would have a total capacity of 114 rooms. Matamba has 117 and Ling Bao 175 rooms for comparison.

The new curved rows of rooms are on a higher level than those neighbouring; presumably to create an higher ceiling for the hotel lobby which will be partly underneath (with the entrance undoubtedly being from this left corner of the site).

Control systems, perhaps? The crate looks a little narrow to be housing fully assembled train cars, but I could be wrong.
Last edited: Oct 17, 2019
S

When you look closer to the container...you can see a door...its a container for the vekoma installation supervisor, with tools etc. That they used while installing the coaster.

Be great if they stuck a B&M logo on that crate just to mess with everyone's minds.

Massive thanks to all for updates particularly @CSLKennyNI for the great summaries.

(I should really say this in every thread, makes the forum great)

I know that this project has been dragging on a ridiculous amount of time but it’s so ridiculously cool I still find myself so excited, even if it’s mostly concrete updates. Taron is one of my favourite things to ever happen so to think a flying version, steampunk, near-misses with a hotel, scenery everywhere including above you - it’s going to be bloody great.

The third floor of rooms was also installed last night. Perhaps floor 4 was placed on it today. Which means that tomorrow, at the end of the (working) week, this last hotel tower is completed.

.....out of curiosity, how much would a trip to Germany reasonably cost?

Jackson said:
.....out of curiosity, how much would a trip to Germany reasonably cost?
Click to expand...