Despite knowing exactly what to expect (it's just tri-track Sierra Sidewinder after all), I'm actually taken aback at how big this looks. I've said it before and I'll likely say it again 300 times before opening... this ride is a massive step for Paulton's in the right direction.

^ I was also about to comment on how big it looks. I think this might be quite intimidating for a lot of children, perhaps.


Tonkso said:
I've said it before and I'll likely say it again 300 times before opening... this ride is a massive step for Paulton's in the right direction.
Click to expand...

I still don't get why enthusiasts want Paultons to be a thrill park. It's a family park and it does it well. I wouldn't be surprised if this coaster is the most intense coaster they ever get tbh.
T

I don't want it to be a thrill park personally, but I believe really strong parks have a diverse lineup of rides from family-friendly to thrill. I'm not expecting them to invest in a B&M any time soon, but a rapids (themed and interacting with Cobra) and/or shooter dark-ride could be a fantastic next step for them.

Paulton's will want to continue to attract young familes, but retain the same families as their children outgrow Peppa Pig World and the Lost Kingdom.

Although it does look a lot better in tri-track so not complaining. Great to see Paulton's continue to expand.

Although it does look a lot better in tri-track so not complaining. Great to see Paulton's continue to expand.
Click to expand...

Spiderman in Dubai is the same model, uses the same trains and has the tri-track too so not really sure. Less supports needed?

New behind the scenes construction update courtesy of TPW including some track installation:-

roomraider said:
Spiderman in Dubai is the same model, uses the same trains and has the tri-track too so not really sure. Less supports needed?
Click to expand... 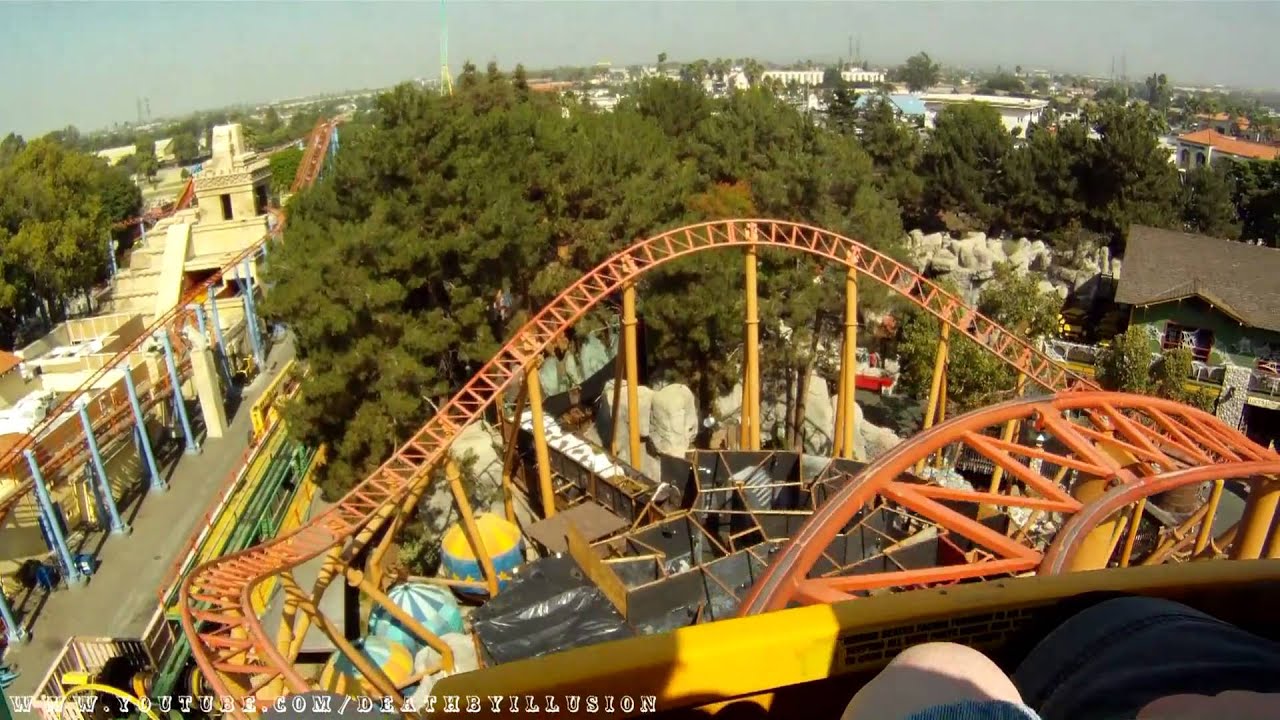 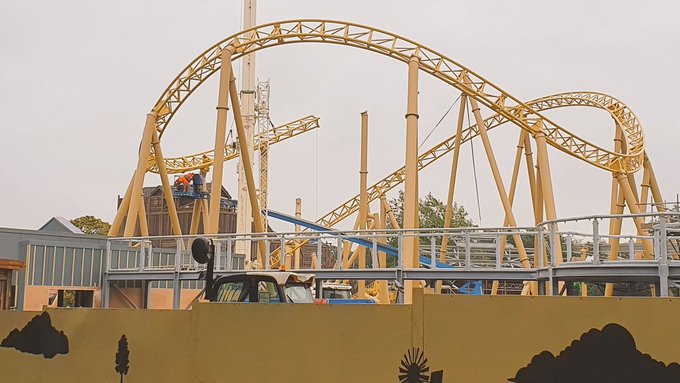 Yeah, you can see there's a lot less supports.

I would have said Paultons was a must do UK park before this, but I hope this convince some of you that have not gone yet to make the trip out. While I don't see massive rides coming, if they see more adults go they might do more to appeal to us. I don't think a Woodie or a Mild Launch is out of the question for the future, this might be there last coaster for a while as there up to six now and I think a dark rides is more needed. But yea cannot wait to go next year.

I know they probably haven't, but it would be cool if they got a two-in-one coaster deal with this and a Mack Mega Coaster, similar to Alpina Blitz in a few years time.
Last edited: Oct 10, 2019

CrashCoaster said:
I know they probably haven't, but it would be cool if they got a two-in-one coaster deal with this and a Mack Mega Coaster, similar to Alpina Blitz in a few years time.
Click to expand...

I think it’s unlikely that it would be a mega coaster, but I would say there’s a chance they’ve got a long term contract with Mack as they build up their park. Their last investment featured a Mack ride also


Sent from my iPad using Tapatalk

Does anyone know how well Paultons are doing in terms of visitor numbers compared to other UK theme parks? They seem to be doing much better now in general than they were doing even 5 years ago. Just a shame it's over 4 hours away from me.

Kind of off topic but after Tornado Springs opens, what do you guys think they'll do next? I'm hoping that they will either replace their log flume with a decent one or theme up the one they have currently. I also think they are in need of a decent dark ride, in general some areas of the park, particularly around the Cobra area need bringing up to standard. Will be an interesting park to observe over the coming years.

I have had to much time on my hands a thought what i would do with Paultons in the future. Kept it simple and only gave a rough plan

Yellow: This would be either a Peppa pig expansion or an animal expansion

Red: Along the water would go a GG Woodie, tallest coaster in the park and would focus on airtime and tight turns, the area would have a Classic 1920s theme park theme, keeping the carousel, tea cups and moving the Sky swinger over to this location. The restaurant, seating area and show space would all be revamped and done up.

Orange: With Tornado springs coming in 2020 this area will have massive change, however not all the land highlighted will be used, so at the bottom left I would add a log flume. This would be similar to Knott’s with the flume going through and around a mountain with show elements inside, also some animals from the USA could take up any remaining space not used.

Blue: Hard one, they could just put a better 4D show in but if possible a li-Fly Hex by Holovis would be my pick, its like a flying theatre but smaller, throughput might not be great but this would be a brilliant relaxing indoor ride, theme it to exploring the world by air, pretty much soarin.

Purple: Remove everything apart from the dragon ride (will move somewhere else in the area), Magma might be added to the theme or left in the Cyan area. This would have a fantasy theme, castles, knights, princesses, and dragons. A obsidian Mountain and Castle would be the focal point of this land (built in bottom right) with an enchanted forest around the entrance to the land, inside the mountain would be Paulton’s most thrilling ride, a Mack or Vekoma Launch coaster, it would go out and drop into the Go-Kart area and then come back, stick a animatronic dragon on the ride and some obsidian pillars round the ride for near misses and it would be great (maybe an inversion). In the castle would be a princess and Knight meet and greet and special dining experience, I cannot see a day when kids will not want to dress as their favourite fantasy characters. A dark ride with outdoor sections through the enchanted forest would be a good addition to.

Cyan: (If they can build on this land) Not too sure here, a general theme would be good as this area does feel plain, an ancient city theme, South American or Asian perhaps. This area has a big empty plot of land and some more animals could go here or keep it for people with picnics.

Green: (If they can build on this land) In the UK we have not the best weather for theme parks so this area could be indoor and be open all year round, it would have a winter wonderland theme with an alpine village covered in snow and ice. During winter this is were you would now meet Santa and also Peppa, there would be smaller attractions added and the main ride would be a Mack powered invert coaster, it would take you round the perimeter of the building and have a fast bit through some snow tunnels but it would mainly be a more tame ride designed to tell a story and see the land. The roof could be a starry sky and show the Arora every so often. There would also be a large play area with slides and tunnels, also a winter entrance gate would have to be added. This would only be added if they could see enough people coming during winter.

Blank areas: for the most part I don’t see changes needed, they are well done and great for the park. If space is an issue then maybe a multi-story car park could be put in, then they can build on old car park space.

Really interesting post! Here's what I think of your plans:

Yellow: I agree this area should be reserved for that purpose. Peppa Pig World just keeps getting more popular and the park need to reserve space for it in order to increase the area's capacity.

Pink: Would be a good use of land however I imagine they would most likely be relocated into the animal/gardens area to keep the appeal for older members of the family.

Red: I would personally clear the area altogether and prepare the lake for some kind of show. PP could perform a fireworks night in the future on there along with other shows once they've established themselves more as a world-class theme park. I would then use the remainder of this space as expansion room for the other three themed areas, making the carousel a focal point where the main path diverges into Tornado Springs, Critter Creek and Peppa Pig World. Critter Creek would see the biggest expansion allowing it to become a proper themed area rather than a mini one.

Orange: Agree with the log flume but I wouldn't use it as an enclosure. I would add a hotel on the edge so that PP can become a resort. It would have underground parking to save space and would be themed to Tornado Springs. This would also help with the park financially as guests would be eating in the park and some staying over. This may not happen for a while though as PP isn't a two day park yet and doesn't have enough appeal for people to visit from afar (the North and the near continent).

Blue: I would use this as an opportunity to overhaul the entire entrance beyond the gate, creating a mini Main Street leading to the new main pathway. It would be open and incorporate all the guest services.

Purple: Seems great although I would save some of the land for a Lost Kingdom expansion as I believe that area still has expansion potential.

Cyan: I think a jungle theme would be most appropriate for this area and it would be great to see a rapids surrounding this area and going into the green area to add to their water attractions.

Green: Any general expansion would be great although this might be used for another hotel if they push for the resort option.

Blank areas: I would also create a multi-storey car park and use the other land to make a nice approach to the entrance and some more accommodation like in Disney. I would also have said car park further back on the grass overflow car park to give the park some breathing space and create a more grand entrance. I think it would be unlikely for them to remake the entrance building as it is new but it doesn't have to be the main entrance and could just be part of the gift shop area.

Nice ideas, i like what you would do to the red area especially, a large show would be nice and those lands might need more room. Still need somewhere for the Woodie to go though

Niles said:
Nice ideas, i like what you would do to the red area especially, a large show would be nice and those lands might need more room. Still need somewhere for the Woodie to go though


Sent from my iPad using Tapatalk

Well that was bloody quick...

I mean look at the size of them, you’d be able to put it up in a few hours easily.
T