Here's a little update with some details on the expansion for Fun Spot Action Park, from TPR. 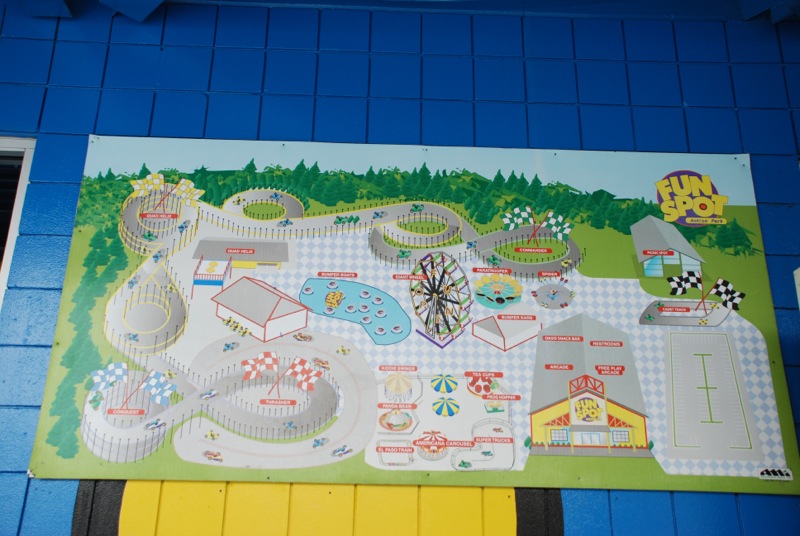 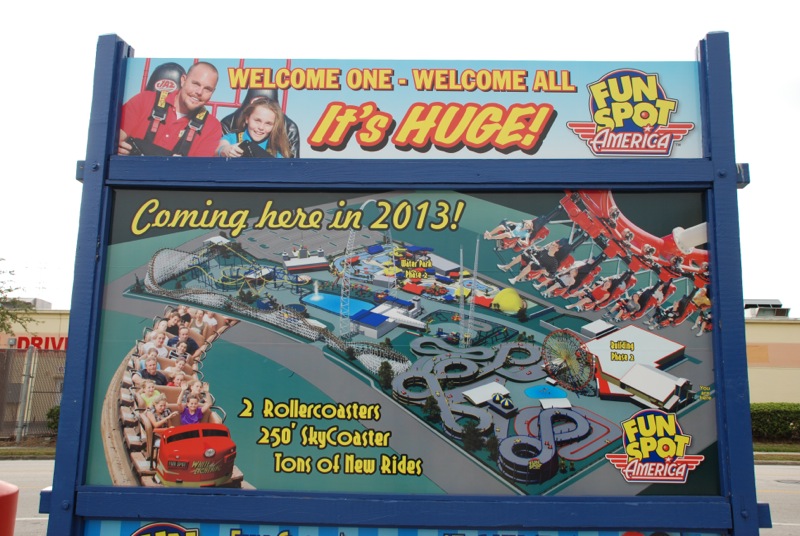 There's also going to be a third coaster added next year, a kiddie coaster, plus some flat rides. And there will also be a water park added at a later date. 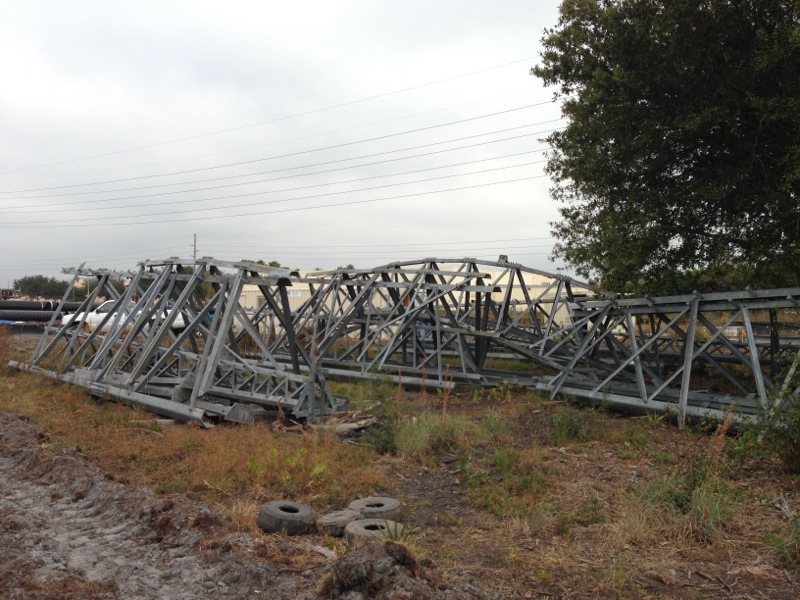 The recycled Sky Coaster from Vegas. 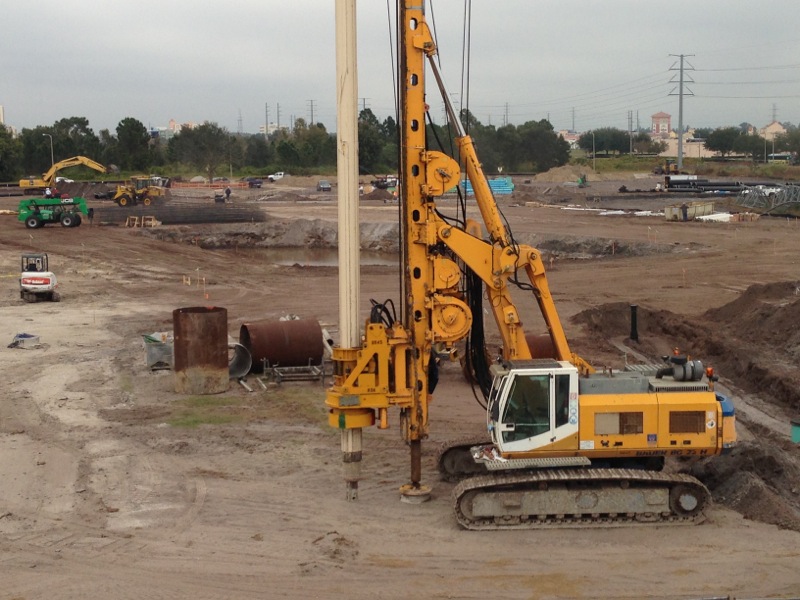 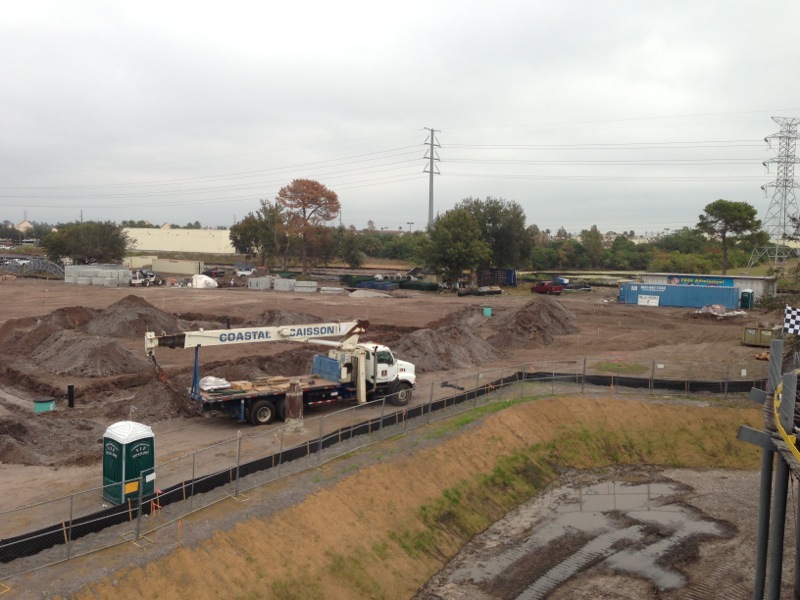 And the park is going to be renamed Fun Spot America.

Creds! <3 I'm glad they're making an effort to appeal instead of continuing to operate in a dumpy fairground style, very nice.

So the themed cars for White Lightning is a train -,-;;;

^ Surely it's more of a coaster train than a car

You dawg, I heard you like trains. So we are gonna theme the coaster train to a train.

So now you can ride a train, while inside a train!

I'm really liking this. So easy to pick up a few extra credz to go along with the fantastic go-karts. Looks like there's plenty of room for more flats & I'm glad they're keeping their insane paratrooper (just moving it under the SkyCoaster). Wonder how much the wristbands will cost now? Hopefully they will have a separate one for the go-karts.

Some more artwork, and it looks like they're also getting a S&S Screamin' Swing.

Coaster Crew has posted the following photos on their Facebook page:

Helicoptor shots really are all the rage this year!

JUst spotted on TPR that Fun Spot have recently got hold of 'Wheeli' from SFOG, a Huss Enterprise. They posted a pic on their FB page: 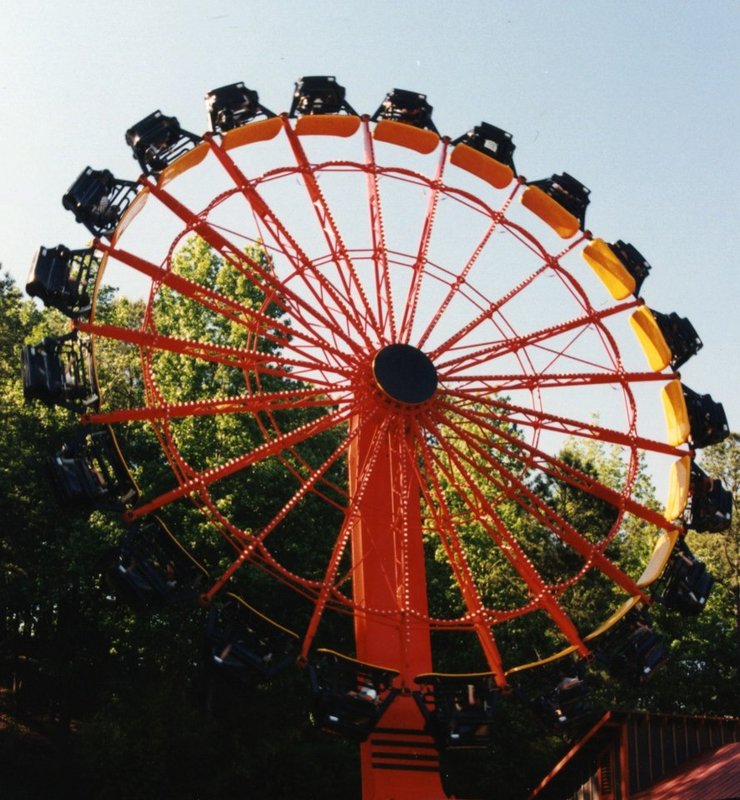 So, so far we know of : GCI Woody, Vekoma SFC, kiddie coaster, Enterprise, S&S Screaming Swing and Sky Coaster! Pretty impressive for such a small park!

I needed another day to get my report together & I wanted to lead off this post with the videos Ian posted earlier today in the White Lighting construction topic, so I moved them here. I recommend watching both to get all the info on the expansion, as I will not be repeating everything in this post.

Here is my interview with Mark Brisson, the Director of Marketing for Fun Spot America.
[youtube]http://www.youtube.com/watch?v=mUAPN0Xtcmo[/youtube]

The first 14 minutes of this video is the guided tour & the rest are clips of construction filmed the previous day - for anyone interested in that sort of thing.
[youtube]http://www.youtube.com/watch?v=O6Y9sYxQ92A[/youtube]

For those that couldn't be bothered with watching the first 14 minutes of the construction video - Mark gave us exclusive information that the park also purchased the acreage across the street from the current expansion area (see the areal photos in my previous post), which is going to be leased to one of three bidders for another attraction area. You can skip to 6:40 minutes into the video to hear details about the adjoining attraction area.

All photos were taken over a two day period, with the first day being taken from around the park perimeter & the second day closeups taken during Mark's construction tour.

The park expansion encompasses 10 acres so I'll start off with some (rough) panorama shots to give you an idea of the size.

White Lightning, the GCI woodie will run the length of the entire expansion area.

The full layout of White Lightning.

Along here is where the water park will be built in the next expansion phase.

The area with all the Vekoma track will be the new parking lot, with the main entrance building on the left.

On to Freedom Flyer's construction.

Footers being finished off one day...

...and completed the next.

One of the station foundations.

Since 2006 Chance & Vekoma have worked together to﻿ build three suspended family coasters under license in the U.S. market. This one will be the last under that license agreement, but Chance Rides will continue to provide spare parts & technical service for all the rides built together with Vekoma.

Now on to the GCI woodie.

The station foundation has been poured & the final brake run supports are starting to go up.

The poles behind the turnaround are for the expansion of the green go-kart track, which will be three stories tall when completed.

The turnaround will also be taller than any of the go-kart tracks.

Here you can see how they use temporary wooden support beams (on the left) to erect the steel support structure.

Other than the entrance building & the restrooms (small white building that can bee seen in the first panorama photo), the merchandise/sky coaster prep station is the only other building currently up.

The sky coaster was relocated from the MGM Grand in Las Vegas & at 250 feet is the second tallest in the world.

The world's tallest is at the Fun Spot USA park in nearby Kissimmee, Florida & is 300 feet tall.

So that about does it. Hopefully everything was covered between the videos, photos & the little amount of text I've written, but if you have any questions post them & I'll do my best to answer. Also feel free to give me any advice/pointers for my return trip & the next update.

You wouldn't think a tiny pay-per-attraction joint would have the funds to afford a sudden expansion of this magnitude. How on earth are they pulling this off? Laundered drug money? :roll:

Park President/Owner John Arie Sr isn't known as Mr. Go-Kart for nothing. He owns several go-kart track patents & gets license fees from almost every go-kart operation in the world (Mt Olympus is one of the only parks to prove that they didn't infringe upon his registered designs). Just last year he agreed to an out-of-court settlement with nearby rival Magical Midway, which also now pays monthly fees in addition to the undisclosed settlement.
He opened Fun ’n Wheels in Orlando in 1978 & sold it 10 years later, after a couple of expansions. The sale included a non-compete clause, so he opened Fun Spot in Myrtle Beach & then Fun Spot in Virginia Beach, before selling each & returning to Orlando to open Fun Spot America in June 1998. We added Fun Spot USA in Kissimmee in 2007.
The two parks also set records in attendance numbers year in & year out, with 500,000 annually at Fun Spot America in Orlando & 700,000 at Fun Spot USA in Kissimmee. The total expansion startup cost is only $25 million, plus the land purchases for the expansion & the acreage across the street were a steal. Add on the income he'll be making from the new attraction deal that Mark talked about & I think he'll be back in the black in no time.

Oh I'm thrilled that they're doing something with this, I remember popping my head in when I was last in FL, was watching from the Burger King up the road and remember wondering how it competed with the bigger attractions, however it charmed me, so next time I'm back in FL i'm deffo going to have another gander!
R

Fun Spot is 5 minutes from my office. I can't wait to get some GCII action on my lunch breaks.

They sell a seasonpass, I've held one the last two years

Annddd the 250 foot MGM Grand Sky Coaster is now UP and extremely visible from the back side of I-Drive on Uni. BLVD

^If you get a some free time, it would be great if you could stop by & take a few photos to post here so we could all see how construction is progressing.

From their FB page: