Social Media Team
So, there is a God, and S&S are building a new 4D coaster, this time in China!

New Coasters Delight Amusement Park Customers To the Thrill of S&S Worldwide
Another major coaster project now in the works!
LOGAN, Utah - (February 15, 2010) – Long recognized as the company that designed the 4th Dimension coaster, arguably the most technologically advanced coaster on the planet, S&S Worldwide, Inc. is pleased to announce plans for yet another 4th Dimension coaster. Known as X2” at Six Flags California and as “Eejanaika” at Fujikyu Highlands in Japan, the next 4th Dimension coaster will amaze and thrill the people of China when it opens there in 2011.
Unlike traditional coasters where trains only parallel the track, the 4th Dimension sends riders screaming around its 3,600-foot maze of steel track aboard massive wing-shaped trains. The seats extend off of the track to the sides of the vehicle, allowing the passengers to be independently rotated head over heels and forward and backward.
The 4th Dimension’s large vehicles seat 24 passengers, two abreast in twelve individual cars, six positioned on each side of the train, with a state-of-the-art restraint system that adjusts to each rider’s size and safely secures the individual for the duration of the ride. The ride’s 360-degree rotating seats move the passengers independently, creating head-first, face-down drops, and unique “don’t know what to expect next” excitement.
The passengers actually face backward as the train leaves the station, rounds a turn, and begins its 250-foot (76-meter) ascent to the crest of the lift hill. The passengers get an impressive sweeping view of the surrounding area and are not afforded the comfort of seeing what’s to come.
Before plunging off the near vertical first drop, the seats suddenly flip forward, placing the riders in a totally unique and thrilling position facing the ground. The steep first drop is insane, reaching a breathtaking speed of nearly 80 mph (129 kph). As the passengers soar through the exciting elements of the ride experience, including raven turns, dives, and half-twists, the smooth rotation of the seats creates a surprise with every turn or drop, some beautiful air time, and an intensity that never lets off.
“This amazing coaster takes riders on a journey to an unchartered dimension of extreme that only
the 4th Dimension can deliver,” said Kevin Rohwer, Vice President of Sales and Marketing for S&S.
“We appreciate yet another opportunity to build and install this incredible coaster, and we anticipate that the amusement industry will be very excited about its upcoming installation.
Dinosaur Park (Changzhou, China) is already counting down the days until this great attraction will open to the people of China.”
Click to expand...

Staff member
Administrator
Moderator
Social Media Team
Edited, since the post makes no sense now that we've linked to the original source in the first post.
A

I think that it might have come from S&S themselves, there was a note about a new 4D in First Drop but that didn't say anything about the park. It's still nice to see another one...

Yay! I'm totally riding one of these one day, they look so unique and interesting. Except, hopefully it gets better reviews than Eejanaika did.

Never one to turn down an opportunity of a good Chinese Coaster Web hunt I dug up a couple of news article. (so its not just TPR ) 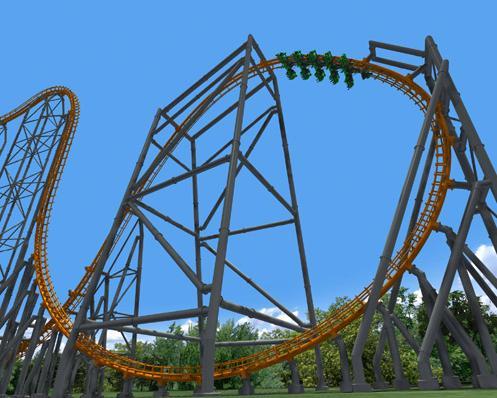 Could be a proper rendering of just a S&S stock cgi image.

Could just be a recolored generic rendering image from S&S. There's only 5 cars in the image when the Dinosaur Park ride will have 6 according to the press release. It's likely it'll be the same type of layout, but it's not out of the question to be something different.

Staff member
Social Media Team
I need/want that whole layout. Let us hope they have the new trains tho.
B

I was worried the 4D was dead, so this is great news. Hopefully this will be the trigger that sets off a chain of these being built world wide.

I can't see this one being much different from Eejanaika, maybe a few different turns or an extra inversion, but we all know what Chinese parks are like for originality, so I expect a clone.

Blaze said:
I was worried the 4D was dead, so this is great news. Hopefully this will be the trigger that sets off a chain of these being built world wide.
Click to expand...

Yes, because every park wants a rather overally expensive and unreliable coaster that requires a massive footprint and a lot of work put into it :roll:

X (the original version) was a poor coaster... I can see why they didn't take off then, and I doubt they will in the same way Accelerators and Eurofighters both have...

Staff member
Administrator
Moderator
Yeah, the 4D is in its own size class, to put it that way.

First, their height of about 70 metres put them well into the Hyper category. But unlike the regular hypers (and Dive Machines, tophat launchers etc), their silhouette is nearly massive thanks to the forest of supports that keeps the thing from crashing to the ground. The keywords here are "neighbour complaints". The cost of steel for said forest is also a key factor.

Then there are all the moving parts in the cars themselves. I'm willing to bed the 4D trains have more than twice as many moving parts as any other coaster type trains. This equals need for extensive maintenance.

The size of the trains themselves should also be taken into consideration. They are the size of city buses and weigh a lot more than most other coaster trains. Loading and unloading them is also a slow process.

All in all, the 4Ds represent massive investments for the parks that buy them, that is, if they ever get planning permission. I can't see that coaster type take off and become an everyday sight. For the smaller parks, ZacSpins might be the way to go instead. And I expect these to be quite popular in the years to come.

Best. News. Ever. Well, for ages anyway. Keeps alive my hope that we might one day see one of these in europe

Please don't all start quoting planning restrictions and stuff at me. Surely somewhere would be capable of building something on this scale. Anyway, even if they're not please leave me to my dream. you never know what the future may hold!

That is some bad. ass. theming. Cool colours too, at least it isn't red and yellow .
U

LiveForTheLaunch said:
That is some bad. ass. theming.
Click to expand...

I was thinking that the theming looked good too.

I've always liked the 4D coasters. Sure, they're huge and take up a massive footprint, but they look do dominating, perfect for China!

I can't see many more getting built outside of China. Having said that, hearing the reviews of X2...you never know.

It's quite an awesome sight when you turn the corner into Six Flags Magic Mountain and you see X looming in front of you. Not only that, but it is a very fun experience.

The only way I can see these rides taking off is if they are built on a smaller scale. 200 feet is huge, but if one of these were designed to be around 100-150 feet high, it would probably have a bit smaller footprint and since it wouldn't be as fast, maintenance might not be as high(not saying it won't be high though). Who knows, having a smaller version of these rides might make it more enjoyable?
You must log in or register to reply here.
Share:
Facebook Twitter Reddit Pinterest Tumblr WhatsApp Email Share Link
Menu
Log in
Register
Top