I heard rumors that it'll be British Rail.


Sanchezmran said:
^I dunno. That helix at the end looks like it provides some great gs.
Click to expand...

It will be the end of the ride, without any MCBR, which means speed is designed to be naturally reduced without the assistance of braking.

That means the last helix could be crap, or could provide some good forces. The one thing I am glad to see is that it is a descending helix - I am not a fan of helixes that spin upwards with Cedar Fair inverts, as the train loses speed through the helix. Cedar Fair's first invert, Raptor, has a descending helix, which increases in speed and g-force as it goes. Very nice element.

I'm imagining the inline to be similar to the B&M Wing Rider inlines or Hydra's Jojo Roll - slower with hangtime.

I am just really hoping the pacing is alright with Banshee. They have said that the fastest point won't be reached until the second half of the ride, but there are still plenty of inversions and turns that would be nice to have some g-force in.

Looking at the webcam, it looks like the first bit of lift is in place! Yay!

EDIT: Didn't know the webcam updated with the one on the site. Thought that image would have a separate image URL. Sorry you can't see it at night.

They're going to sue you for every penny you have now, be prepared
B

That is a steep lift, and it looks awesome

It looks rather tall actually! 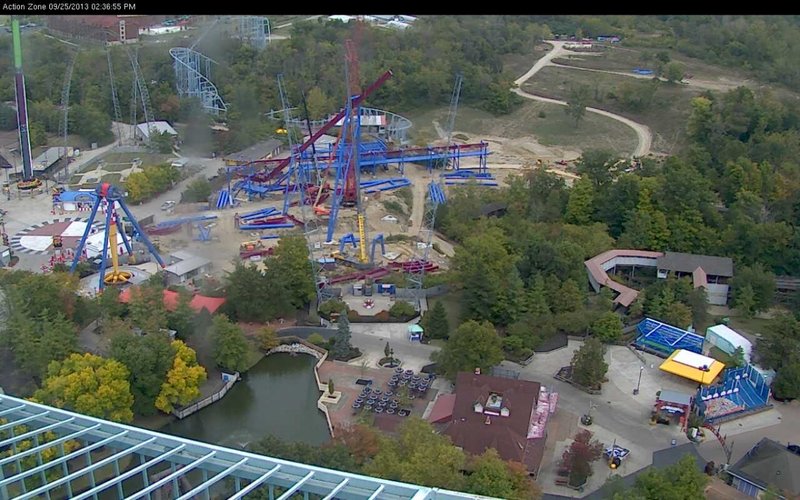 That drop has the potential to be amazing, look how high it is and it's not even topped off, and how it has to sweep around to those 2 low supports. Come on B&M don't let me down!

This ride is massive! Hope B&M don't mess this one up!


owenrita121 said:
This ride is massive! Hope B&M don't mess this one up!
Click to expand...

B&M hardly ever mess up. Not as much as other manufacturers anyway.

^I didn't mean it like that, I meant it as being like some of the other newer Inverts, forceless and nothing really special about them.


owenrita121 said:
I meant it as being like some of the other newer Inverts, forceless and nothing really special about them.
Click to expand...

That is exactly how it is going to be.

Seriously, don't set yourself up for disappointment hoping otherwise.
Them, if it against all odds, actually is more intense you will be hugely surprised.


owenrita121 said:
^I didn't mean it like that, I meant it as being like some of the other newer Inverts, forceless and nothing really special about them.
Click to expand...

This. I really would like to see an intense invert built again. The speed and the batwing both seem like good signs to me, but I'm still not convinced it will be particularly forceful. We can only hope at this point.

That dive loop looks pretty round to be forceless in the animation.

I honestly don't think that newer B&Ms are bad. Definitely don't feel like old ones but it's not bad. Has anybody ridden Wild Eagle in the back on the left? I rode there this season, expecting the mild, floaty ride that coaster usually provides. How wrong was I? That ride invoked more swearing out of me than my first ride on MEAN STREAK. Not out of pain or fear, but surprise! It was my first time experiencing the stapling but MAN! I found it more intense than Apollo's Chariot! I was very pleasantly surprised with that run until I got nailed into my restraint. It felt very different than, say, Afterburn, but the forces were still there. The sped at which they fluctuated was significantly lower , but it felt just as intense. I couldn't keep my hands up going around te eight curve. I imagine similar forces would have to be present SOMEWHERE on Banshee.

I also said this on another site, but could this be programmed like GateKeeper in that once the train is fully on the chain, it kicks up the speed? I didn't notice it on Wild Eagle but I noticed it on GateKeeper.

Can't wait to see the actual ride go up!
R

^Most of the newer B&M's have a "creep" mode built in. If the next block is not clear the chain will run at a slower speed until the train in front of it has passed.

Dueling Dragons used to have multi-speed chains to allow the Dragons to duel.

Looks like B&M is playing along with the 'minimal lift hill supports' game.

I like the colors a lot more than I thought I would. They really POP nicely.

Anyone want to place bets on how long it will take for this color to fade? :razz:

What are you talking about? Technically, it began to fade before the paint was even dry.

Diamondback's track around the splashdown already looks horrible but the rest of the ride's held up nicely. Though I can't be the only one who's noticed that there's an extra yellow support after where the supports are supposed to turn beige.

Technically, as stated above, it's already fading. Though I think it'll be fine for a few years. I've noticed that medium track shades seem to last the longest. Though Dragster's red looks awful ten years later, that thing is dire for a repaint.
You must log in or register to reply here.
Share:
Facebook Twitter Reddit Pinterest Tumblr WhatsApp Email Share Link
Menu
Log in
Register
Top