Kentucky Kingdom planning an RMC Raptor for the 2021 season?

It looks like Kentucky Kingdom had already begun planning their 2021 addition before the Coronavirus pandemic hit. We recently discovered height waivers filed by the park back in February for the addition of a 108ft tall roller coaster not-so-subtly named “Raptor”. As you can see on the document...

It would go in between Storm Chaser and Thunder Run, near where the Larson Loop currently is. Hopefully this wasn't fully cancelled because of the current world situation.

Dang beat me to it.

Really hope this goes ahead, will give the park one of the best top 3 in the world. How many rumoured RMC Raptors is that now, 4? KK, WWW, SFMM, and SFSL?

Considering many thought the model had flopped, these Raptors are really beginning to fly up now!

As the two posters above have already said, it should be an amazing addition if it happens!

If the location for that is true, it's gonna be a blast going back and forth between this and Storm Chaser.

Yeah, I think if one says that the Raptors are a flop yet 4 Raptors open in quick succession, I really don't think that's true.

Unfortunately, Kentucky Kingdom have confirmed the leak, but it looks like someone photoshopped in the Raptor info. They're actually building another SLC to duel with their current one. 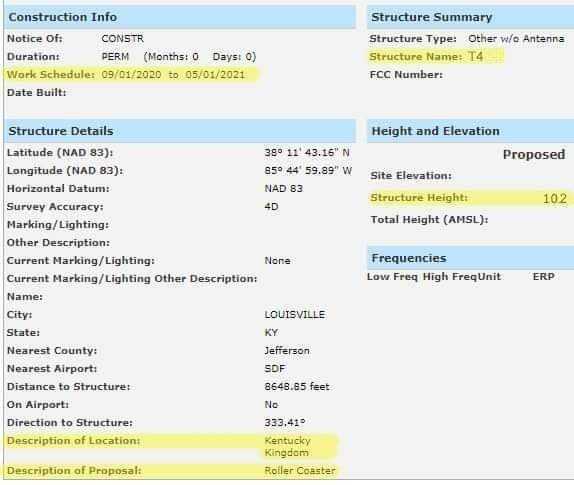 I could totally see Jeff sending the original document to Coaster Kings JUST to make another T3 meme and get the fan base all riled up. He's good at that.

Regardless...I'll gladly eat my words about raptors if it means one will get built within driving distance <3

I had another thought; could this potentially make Kentucky Kingdom debatably the airtime capital of the world? As they already have Storm Chaser & Lightning Run, both of which allegedly have fantastic airtime, and there is Kentucky Flyer which apparently has quite a bit for a ride its size, so if they add a Raptor, again a coaster type well known for insane airtime... is there another park out there that has such a triple whammy of insane airtime?

Kentucky Kingdom has quickly gone from a bit of a ****hole to a very good coaster destination, and a Raptor would be a great addition if it actually came to fruition. I need to make a trip back there in the coming years and this would be a good draw, on top of reriding Storm Chaser.

What an awesome response from the park on the leak!

Staff member
Moderator
Social Media Team
Would gladly welcome this news - the Raptor was always meant to be a big thrill for second and third tier parks. Considering you have to wait 2 minutes on a crowded day for a roller coaster ride at Kentucky Kingdom, could see a Raptor playing nicely to the park's demographic and draw, facing no real capacity penalty for the smaller trains.

The question is which park is the discounted IAAPA Raptor going to...

CrashCoaster said:
The question is which park is the discounted IAAPA Raptor going to...
Click to expand...

The one in asshole South Dakota. Not that hard.

RaPtOrS wErE a BuSt AnD nObOdY wAnTs ThEm.

tomahawk said:
The one in asshole South Dakota. Not that hard.

RaPtOrS wErE a BuSt AnD nObOdY wAnTs ThEm.
Click to expand...

Staff member
Social Media Team
This is a shame that they're not actually getting one because it would've been really fab. I loved this park. Even Thunder Run had good airtime, I remember us saying at the time that the park is just full of airtime ha.

i305_zack said:
Dude, what is ur problem, they were no bust, they are still coming out, we are seeing three in 2021
Click to expand...

And there goes the joke...sailing way over your head.
N

A duelling SLC..... a dream? Sounds like a nightmare!

But seriously, looks fun. It would obviously be rather awesome if they completely rebuilt T3 at the same time.

Antinos said:
And there goes the joke...sailing way over your head.
Click to expand...

Lofty said:
This is a shame that they're not actually getting one because it would've been really fab. I loved this park. Even Thunder Run had good airtime, I remember us saying at the time that the park is just full of airtime ha.
Click to expand...