I didn't really take that many pictures so there may be some RCDB images on the off chance I'm not the last person on here to mop up these creds and someone may not know what I'm on about. Plus I'm bored and like having trip reports to look back on.

Last (and possibly only time, don't recall visiting as a child) I was up this way it was early 2012, we were in Lowestoft to watch the sunrise, PWH was shut, PB was shut and both Yarmouth and Lowestoft were ghost towns. So it was nice to park up and see people walking along the seafront even if the clouds were out and the wind was harsh.

Walked all the way up to Joyland first, can't fault them for effort in squeezing the rides in.

Now. RCDB says 2 coasters. Coastercounter says 3. I say 1, but I go off of my CC count so they're all included.

Spook Express is blatant enough, fast little kiddy cred with a dark helix, all taking place above the park and offering decent views. 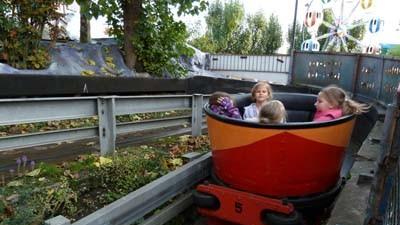 Not my picture I don't know who the kids are I found it on Google. For those that don't know it's powered, and I'm not sure if it coasts as it goes back downhill back and forth (with some amount of pain as it does so) but yeah, CC counts it so it's in.

I mean, some people count the ghost train at BPB afaik, so I guess something with a lift hill, that goes up and down and coasts under it's own momentum, will be counted by some, but again it just isn't a coaster.

Only annoyance with this place was that they had ORP's on both the snails and spook express. But said ORP was just a bloke with a camera asking you to smile in the station, before he gave you a sticker to go and check your picture afterwards. Meaning the place was littered with stickers nobody wanted. Still, it's the perfect sort of small park in the perfect sort of small location, the sort of thing holiday parks like Billing Aquadrome should aim for.

Walked down to the Pleasure Beach, past the segway grand prix and the most expensive ride at the park, the water zorb ball bore things. 4 QUID!?

Got £10 in tokens to cover parking although it turned out you only need 7 to cover the credits.

Family Star, the spinning coaster, was a bit naff, but then it always looked it given the size. Decent spin though.

Big Apple was a +1, though the op let us get in and sit together "as long as you fit" and when we couldn't get the bar down "just don't do anything stupid", no bother.

Whirlwind is their new spinning ride and, well, it's naff.

It doesn't really spin too much, it doesn't really do much of anything. It's obviously a kiddy coaster, and only 1 token, but even the kids who were coming off of it seemed bored.

Rollercoaster was the last credit here. Had no idea what to expect as I was aware of the history of the ride, impressed by the look of it, but was not expecting the sheer size of it. The second drop in particular was huge compared to what I was expecting, it also wasn't really rough at all and is probably one of the best woodies I've ridden, admittedly not high praise. It looks pretty too;

As we had tokens left over we went on the monorail and then some horrible flat ride where you go round really fast and some covers go over, I'm actually useless with flats, I hate them. Walk back up the promenade to get some food, settled on Harry Ramsdens, I ended up with a circumcised saveloy;

Quick trip to Lowestoft and then we drove into PWH about 3pm. Didn't hear any of the coasters which was a bit of a worry, especially as going by CC's count I was on 98 and Katie 99. Headed for Enigma as Katie was sure she'd ridden it when younger.

Tight turns, low to the ground, quite an intense little ride with horrible brakes to finish.

Headed over to Wipeout, both on 99, my first proper boomerang. Faster than I expected, loop was far more forceful than I expected both ways, apart from a bit of a jerk into the corkscrew I actually rather enjoyed it. Don't think I could bottle a GIB though, was bad enough on the lift here. Got off, bought the ORP after scraping pennies together, seriously what sort of third world place doesn't take debit cards in 2015?

Oh, a place that uses a 1mp camera for it's on ride photo's, that's the sort of place.

**** up photoshopping this but idc, was easier to just merge two pictures than finding someone to take the picture for us given how dead it was;

It's not quite a Ian From Coasterforce handshake, but it'll do for us.

Still had two coasters to get done, so after jumping on Rattlesnake, which must be the loudest rollercoaster I've ever heard, we headed over on the cablecar and got off just as the heavens opened and everybody ran for cover. When it had stopped to a drizzle we headed over to Marble Madness, only to find out they won't operate it in the rain. Took a stroll back across the park, found **** all else we wanted to do so got on the train hoping to kill some time, as we did so Marble Madness had opened again and picked up a big queue so we jumped straight back off the train and rain over.

Woefully operated, cars being sent round with 1 person in them, no effort to fill empty seats even when there's two groups of two waiting and cars that seat six. Meh. It's a wild mouse that, thankfully, doesn't spin making it even more painful/dull.

At that point, it was quarter to five, we'd been in the park for an hour 45 and were finished.

Then when adding coasters onto CC, realised that Katie had technically already ridden Wipeout when it was at American Adventure. And in my gloating that we were now level on 103 coasters (yes I know it's bollocks to not include re-locations but to include powered), I didn't think to check my own list upon which I found out Marble Madness was relocated from Flamingo Land and I'd ridden it before. Balls.

Yarmouth Pleasure Beach. It's not great. Neither is Yarmouth. Hence not really calling it Great Yarmouth. Should be called Alright Yarmouth. The actual park itself is alright, not that many rides really but enough to occupy a couple of hours easily. If you include the gardens, and all the extra bits that I think fall under the same token system, then it's huge, but it just needs a bit of a spruce up.

Pleasurewood Hills. The best thing about the place is it's theme tune. Seriously, go to http://pleasurewoodhills.com/ and listen to it, it's been stuck in my head for four days now. PLEASUREWOOD HILLS HEY THERE FOLKS.

Yeah. I want to be mean about it but I don't really think it'd be fair, the staff were all spot on, the park was very clean, bright and colourful. The rides were a bit too spread out meaning some areas felt rather sparse. It just doesn't really have anything that would make me think about going back or even suggest going to people if they were in the area.
You must log in or register to reply here.
Share:
Facebook Twitter Reddit Pinterest Tumblr WhatsApp Email Share Link
Menu
Log in
Register
Top