How many of IMDb’s top 250 TV shows have you watched?

Hi guys. I noticed that the film buff thread in this section of the forums, talking about how many of IMDb’s top 250 films you’ve watched, is fairly popular, so I thought; why not take a delve into the top 250 TV shows and see how many we’ve watched? The current top 250 is as follows: https://m.imdb.com/chart/toptv/?ref_=nv_tvv_250

So, how many have I watched? Well, I’ll admit I’m not too much of a TV watcher, so I reckon the count could be quite low… let’s do this!

The shows I’ve watched at least one episode of from that list, in order of ranking, are as follows:
Wow, that was even worse than 16 on the films one… my total there was 9/250!

For a breakdown like in the films one, it goes:
I’ll admit some of that does surprise me, however; there are things absent from that list that I would personally have predicted to be in there prior to reading (I don’t know if it’s just my personal preference talking, but I’m quite surprised things like Modern Family and The Big Bang Theory aren’t in there).

But how many of IMDb’s top 250 programs have you watched?

Ugh. Any list of top TV shows which doesn't include The Leftovers is totally invalid. That's what you get when you ask the general public.

A few months ago the BBC had a major poll involving "206 TV experts from 43 countries" to determine the best TV shows of the 21st century. It's much more interesting.

This is clearly broken - Only Fools and Horses and Friends are **** (and yes, I know that's even more controversial than me thinking Taron is a bit 'meh')

I recommend good knowledge of the Simpsons if you want a full appreciation of Serena's trip reports though - or mine, for that matter


FarleyFlavors said:
Ugh. Any list of top TV shows which doesn't include The Leftovers is totally invalid. That's what you get when you ask the general public.

A few months ago the BBC had a major poll involving "206 TV experts from 43 countries" to determine the best TV shows of the 21st century. It's much more interesting.
Click to expand...

An interesting list.
Unsurprising to see The Wire take top spot. Succession (one of my current binge watches) coming in at 10th. Possibly justifiable albeit too soon to say?
Definitely some questionable choices... my beloved Utopia... 74th

Will said:
I recommend good knowledge of the Simpsons if you want a full appreciation of Serena's trip reports though - or mine, for that matter
Click to expand...

Interesting… thanks for the pointer! Even though I’ve watched a fair few episodes of The Simpsons (particularly everything Season 19 or earlier, as I have Seasons 1-19 on DVD, and after about Season 27, as that’s when I begun watching it live on TV), I’ve never actually noticed any Simpsons references in either of your reports before… I’m clearly not looking hard enough!

This is my personal favourite:

Serena said:
Remember four hours ago...when we were excited to hear this IMAscore that sounds like Ralph Wiggum with a flute up his nose?
Click to expand...

PS: Sorry for taking your thread way off topic

I've rated 23 of the shows on the list, but have probably seen one or two episodes of the other stuff on there as well (mostly stuff like nature documentaries, talk shows or sitcoms).

Staff member
Administrator
Moderator
Well, any top 250 TV shows that doesn't have Babylon 5 in the top 25, let alone not in the top 250 is not a list worth bothering with.

Also, a massive omission with no Carnivale. It's like these lists are written based on popularity, rather than anything else.

It's especially odd, when you have so cracking oddities like "Spaced" in there though. A series that contains the line "Babylon 5 is ****"

Wow, that's pretty appalling isn't it. I'm not a big TV watcher, and there's some there which I've included which I haven't watched fully (and equally, some I've only watch a bit of, but haven't included, as I don't think I've watched enough of said show).

#3. Breaking Bad. Gave up watching by Season 4. Great first two seasons, but got very tired of it in Season 3. Since I watched over 50% of it, I'll count it, aha

#14. Rick and Morty. Haven't watched the most recent season. I do like it, but it tries way too hard for my liking, and is becoming overly convoluted, and it feels like that's justified in many ways "because that's the point".

#72. Dark. This had been on a 'To watch list' for me for ages, and I finally watched it after seeing glowing reviews on here actually. The final episodes become rather complex, but I adored this.

#87. Stranger Things. Great show, think they should have ended it with 3 seasons though and am a bit worried the 4th one may make things a bit convoluted.

#99. The Simpsons. I bloody love The Simpsons. LOVE IT. Find it unpossible to believe there are people out there who don't enjoy this perfect(ly cromulent) show.

#166. Cobra Kai. I'm a bit too young to have known the films when they came out, but remember always watching them whenever they were shown on terrestrial TV. And really do love the 80s cheese of them all. Cobra Kai absolutely smashes it out the park by treating almost every character as so real, have good and bad sides. Great fun and captures the cheese, but some real gritty character development too. Really enjoyed season 4

#196. Doctor Who. I stopped watching midway through Capaldi's era. I liked everything up to about midway through Matt Smith's doctor, and then grew disinterested with it unfortunately.

#240. Futurama. A few months back I went on a full on binge and watched every episode of this. It is bloody brilliant. Has a few weak spots, and I'm not a fan of the final episode, but for the most part, it's genuinely fantastic.

Side note: I'm a little disappointed that Santa Clarita Diet isn't in the Top 250. Netflix did the show wrong by ending it after 3 seasons, but it was fab.

I'm doing my list based on seeing at least 3 episodes! I don't watch a lot of TV though whatsoever.

EDIT- The list is weird because Vikings got an 8.5 which should put it in the top 250 but it isn't in there. Same with Modern Family at 8.4.

Based on watching at least three episodes, 75/250.

I’m very fussy when it comes to TV shows. If I get the slightest whiff that a plot is being ‘padded’ or plot principally created for the sake of extending the show, I’m become disinterested. TV shows are too much of a time commitment for them to simply be ‘OK’.

But I will swan into the thread to recommend BoJack Horseman. That is sensational. Who would have thought an absurd, comic animation about the troubles of a retired actor (that happens to be a talking horse - yes, really) could provoke so many feels. It’s extremely ‘human’ - exploring all sorts of relatable things. The first season can be a little patchy but if you make it through that and into series 2, it’ll be one of the best shows you’ll ever watch.

See the ratings for each series here: 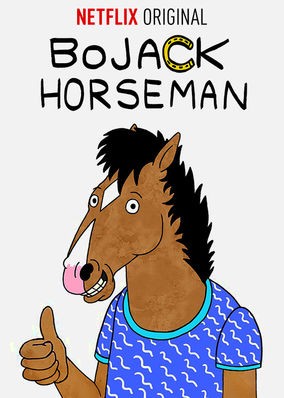 Synopsis:A humanoid horse, BoJack Horseman -- lost in a sea of self-loathing and booze -- decides it's time for a comeback. Once the star of a '90s sitcom, in which he was the adoptive father of three orphaned kids (two girls and a boy). The show was the hottest thing around, then suddenly, was...

34 - actually more than I expected!

@Will Season 19 + of The Simpsons is very generous! I refuse to acknowledge anything after season 11 exists

Seasons 3-8 is the absolute pinnacle of television for me.

The below would be my top 10 in no particular order.

I liked all the shows I have seen. There are a few shows I have only seen one season of, I didn't include them in the list with exception of True Detective because the following seasons have different storylines. My absolute favorites are Band of Brothers, Chernobyl, Game of Thrones, Fargo, the Office and After Life.