Another Dive Coaster is going to a Happy Valley park. This is going to be a custom one, and with the smaller trains. It's set to open in 2017, so yeah. Have fun, gavin!

I'm going to guess that it'll be using regular restraints and the restraints on Valravn were requested by Cedar Point.
E

^I suspect that they're the new restraints for all B&M Dive Coasters.

Dive Coasters seem to be making a bit of a resurgence at the moment, with 4 in the space of 2 years.

They are good products for any big park. They have their exciting stand-out and marketable moment (the drop ofc) and whilst you obviously need a fair bit of room their footprint is considerably smaller than all the B&M 7 inversion coasters, especially if a park opts for a mini diver with standard track.

The park has announced a wooden coaster and several flat rides as well as the B&M dive coaster. Sounds like a whole new area.
All opening October 2017

That's not a complaint by the way, since I wouldn't expect many people to know, but it's just a small pet peeve of mine when parks are listed under districts/areas of cities rather than just using the city name. Coaster-Count is a pain in the arse to navigate because of it, especially with the chains like Happy Valley and Fantawild. Anyway...

Happy Valley are also building a whole new park not too far away in Chongqing, so I'll likely hold off going back to that area until that's also open. Chengdu was nice, but I'm gutted to have to go back to Chongqing, which is f**king vile.

Hopefully, this is a sign that Happy Valley will start making some other big additions to some of their other parks, too.

Next year will be 4 years since Shenzhen opened anything, 5 years for Beijing, and 6 years for Shanghai if you take a small family invert out of the equation. There is currently a pretty large plot of land next to the lake at the Shanghai park having prep work done though, so we'll see.

Construction walls up at the park show off some concept art

Looks like a modified Sheikra layout. I love how it just dives into a pool of water.

Woodie is confirmed as a GCI. Happy valley have signed a contract for at least 2 GCI woodies. The other one is going to the Chongqing park Gavin mentioned along with a B&M wing coaster. So both parks getting a GCI B&M combo.

New signage shows off the layout of their new B&M dive machine and GCI woodie combo set to open next year as well as a better look at the new themed silk road area.

Looks like a massive expansion! Will the wild mouse at front be their Golden Horse spinner repainted?

Pink Panther said:
Looks like a massive expansion! Will the wild mouse at front be their Golden Horse spinner repainted?
Click to expand...

Correct, Looks like it will be getting a retheme. The mouse is essentially at the edge of the park right now. Pretty much everything behind the mouse is new.

GCI is going up.

An update on this GCI from Happy Valley Chengdu

It has also now been confirmed this track at the B&M plant is indeed for this Dive Coaster. Love the colours 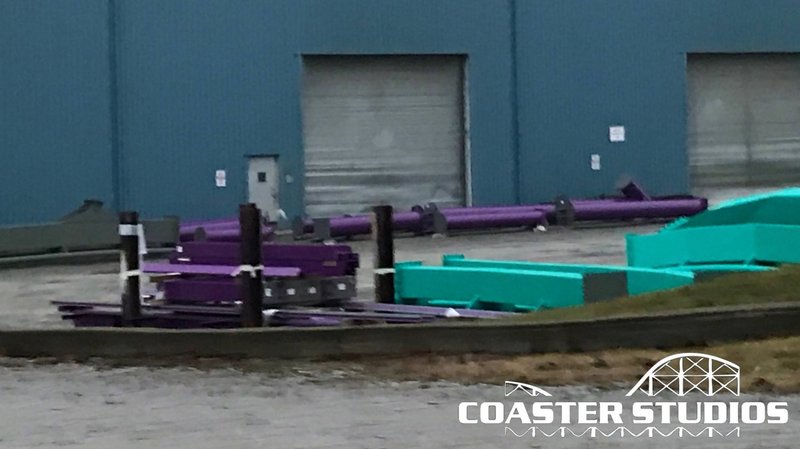 Love purple and turquoise together. YAY.

https://www.facebook.com/
A short chinese news report showing off the GCI and the new area. No sign of the Dive Machine as of yet.

That GCI is giving me some Ghost Rider vibes and I don't know why.

Lofty said:
That GCI is giving me some Ghost Rider vibes and I don't know why.
Click to expand...

Could it be because they're both made out of wood?

Pokemaniac said:
Could it be because they're both made out of wood?
Click to expand...