Info
First up this is a Six Flags Park that is mainly owned by someone called the Riverside Group. They are licensing the Six Flags name for use rather than Six Flags owning the park itself. The location is near the north end of the Hangzhou Bay Bridge and should be easily doable from Shanghai.

SF have a LOT of parks coming to China under this system and there will be three parks at this location
The most interesting one and the one currently most obviously under Construction is the main Six Flags park, however there will also be a Six Flags Kids World park aimed at Children (Obviously) and a Hurricane Harbour Water Park

Six Flags Kids World will feature junior-sized versions of the company’s world famous, recording-breaking roller coasters, rides and attractions. Families with young children will enjoy meeting and interacting with some of their favorite characters. Brightly-themed restaurants will offer kid-friendly menu options and retail shops will feature a wide selection of apparel, toys and souvenirs. Six Flags Kids World will be the perfect complement to the Six Flags theme park and Hurricane Harbor water park in Zhejiang,
Click to expand...

Plan
So for the main park there is a fairly detailed Park Plan already available but as with all park plans from China I am always a little sceptical of its accuracy.

Larger version here thanks to Michael at Themeparx

Here is also a much older plan just for completeness sake. Very similar but lots less detail on and a lots of small changes on the newer one above.

There is obviously a ton to digest here if its accurate. Mainly if we take it at face value coaster wise we have at least
RMC Wooden Coaster
Mack Pulsar
Mack Water Coaster
Vekoma Suspended Family Coaster
Unknown (Premier rumoured) launched coaster around the front gate

Theres a few other possible coasters in there too at the bottom left and to the left of the RMC specifically. The park is also rumoured to get an S&S Free Spin as well which i guess could be at the top there.

Shenzhen Renyi may be a new name to many but they are a huge firm in China and are responsible for a lot of coaster construction out there. Steel Dolphin in Shanghai, The Vekoma Firestorm in Hainan and the B&M Wing Coaster at Wanda Wuxi are just some of their ongoing work. And they have always been a reliable source of info over the last few years so I'm as confident as I can be with Chinese stuff about these.

The wooden roller coaster is characterized by high, large and steep. After the roller coaster first completes 36.9 meters, that is, a 12 -story climb, the roller coaster will descend at a high vertical angle with a speed of up to 88 kilometers per hour, then pass through a vertical ring of about 34 meters. After the track, complete a butterfly flip and then rush to another tower.
Click to expand...

I'd take the stats as always with pinch of salt. As much as i trust the firm as with all Chinese things they seem to rarely be spot on with stats for some reason.

Confirmed elsewhere there is also a dark ride themed to the weird Tuzki Rabbit coming as well. Make of that what you will.

Notes
There are 4 confirmed locations for Six Flags parks in China. Along with this park Chongqing, Nanjing and Fuzhou all now have parks on the way. Each site has multiple parks with Chongqing confirmed to get the same three parks as here as well as a "Six Flags Adventure Park" which doesnt sound like a rides park but more an extreme experience park

will be the ultimate in high adrenaline, action-packed thrills. From motocross bicycle races along rugged terrain, to whitewater rafting to zip lining or rock climbing hundreds of feet above the ground, guests will have the opportunity to reach beyond their comfort zone and safely push the boundaries of self-discovery in a beautiful, natural environment.
Click to expand...

There is a previous topic on Chinese Six Flags Parks here but as thats in News its probably best suited to overall announcements on the ALL up coming parks rather than construction. I get the feeling we will be seeing a lot of news coming out of Casa Del Flags in the coming months.

We'll see how closely they stick to those plans but that RMC looks to be a Goliath clone based on the footprint.

I did not realize Six Flags was planning on making such a splash in China! It'll be interesting to watch this park go up along with the others.
G

Antinos said:
We'll see how closely they stick to those plans but that RMC looks to be a Goliath clone based on the footprint.

I did not realize Six Flags was planning on making such a splash in China! It'll be interesting to watch this park go up along with the others.
Click to expand...

It's a Six Flags branded park, along with all the others. I'd say they're "making a splash" for sure. I think you've misunderstood the phrase.
G

Ethan said:
It's a Six Flags branded park, along with all the others. I'd say they're "making a splash" for sure. I think you've misunderstood the phrase.
Click to expand...

No didn't misunderstand anything. I perfectly understand the deals. It's a licensing deal. SF is not making a splash!

Grobble said:
No didn't misunderstand anything. I perfectly understand the deals. It's a licensing deal. SF is not making a splash!
Click to expand...

They are still expanding their brand to a new market. Regardless of how much they 'own' the park, or how far they're able to manage it, or how involved the Riverside Group is, they are still helping open a new park with the Six Flags brand to a part of the world they have not touched before. It's not the biggest splash, but they are definitely playing in new waters.

By the way, welcome to CoasterForce!

Great news this is finally set in motion! As with all things Chinese parks it's always better to stay cautious since many things do (literaly) not go according to plan, but I'm glad the country would get its first taste of RMC goodness Also with the other parks planned, I'm curious to see if increased competition between parks in the same city will change the usual development pattern of "build 2/3 big rides in one place, and then move on to another new park while the first park stagnates" that we've seen with many park chains in China.

Technically, Six Flags doesn't own any of their parks anymore. In late stage capitalism, branding is king - customers are going to know the parks by their branding, not by their ownership.
G

Antinos said:
Technically, Six Flags doesn't own any of their parks anymore. In late stage capitalism, branding is king - customers are going to know the parks by their branding, not by their ownership.
Click to expand...

You haven't a clue what you're talking about saying SF doesn't own any of their parks anymore. You think your technically BS is sounding smart while just showing complete ignorance. Its absolute BS. Of the 13 dry parks SF had to start 2018 they owned 11. SFOT and SFOG are partnerships where corporate has accumulate units, they have majority units in one of those parks and are accumulating units in both over time. The 2 dry parks and 3 water parks that people keep saying they bought are actually operating lease deals. SF doesn't own anything, they are owned by EPR still.

Antinos said:
Six Flags doesn't own any of their parks
Click to expand...

Grobble said:
SF doesn't own anything
Click to expand...

Sigh can we just say the Six Flags brand is making a splash in China. This argument is pointless.
Disney dont own Tokyo Disneyland but everyone still calls it a Disney park.

Anyway heres some other tidbits from concept art
Although the coasters are mostly inaccurate this image quite nicely shows how one of the main coasters will wrap around the parks entrance area. Something that should look rather good.

The park of course will have an on site hotel just out front.

And heres a nice shot of the already complete visitors center which as usual in China has a model of the development within.

And a link to what appears to be a 2nd official site. Although this time in Chinese
http://www.riverside-sixflags.com/
Last edited: Nov 22, 2018

roomraider said:
however there will also be a Six Flags Kids World park aimed at Children
Click to expand...

Never mind the children, what about us?

Also love the idea of a Tuzki Rabbit dark ride. Takes me back to my Windows Live Messenger days.

I often feel like this in China. Hope it gets a scene.

So... Shenzhen Renyi Installation Engineering a huge construction company in China who have built many many big rides in China recently (Intamins, Steel Dolphin in Shanghai all of Fantawilds Vekomas, Many of the Happy Valley B&Ms) has posted the ride stats for several rides heading to this Six Flags Park. Which makes some of my guesstimates in the first post very wrong.

Here it gets good

Huh, a Mack Hyper. The stats line up pretty closely to Flash at Lewa Adventure, I wonder if this will lead to more Macks being built over here in the US.

Another Flash clone... I'm not complaining tbh. We need more Mack hypers in the world.

It's not a Flash clone. This ride has a shorter height and isn't even a hyper like Flash is.

Pear said:
It's not a Flash clone. This ride has a shorter height and isn't even a hyper like Flash is.
Click to expand...

I'd actually say that ATI has it correct tbh and the information has been reversed by accident.

Simple research shows that Flash's height is 61m and it's drop is 58m. 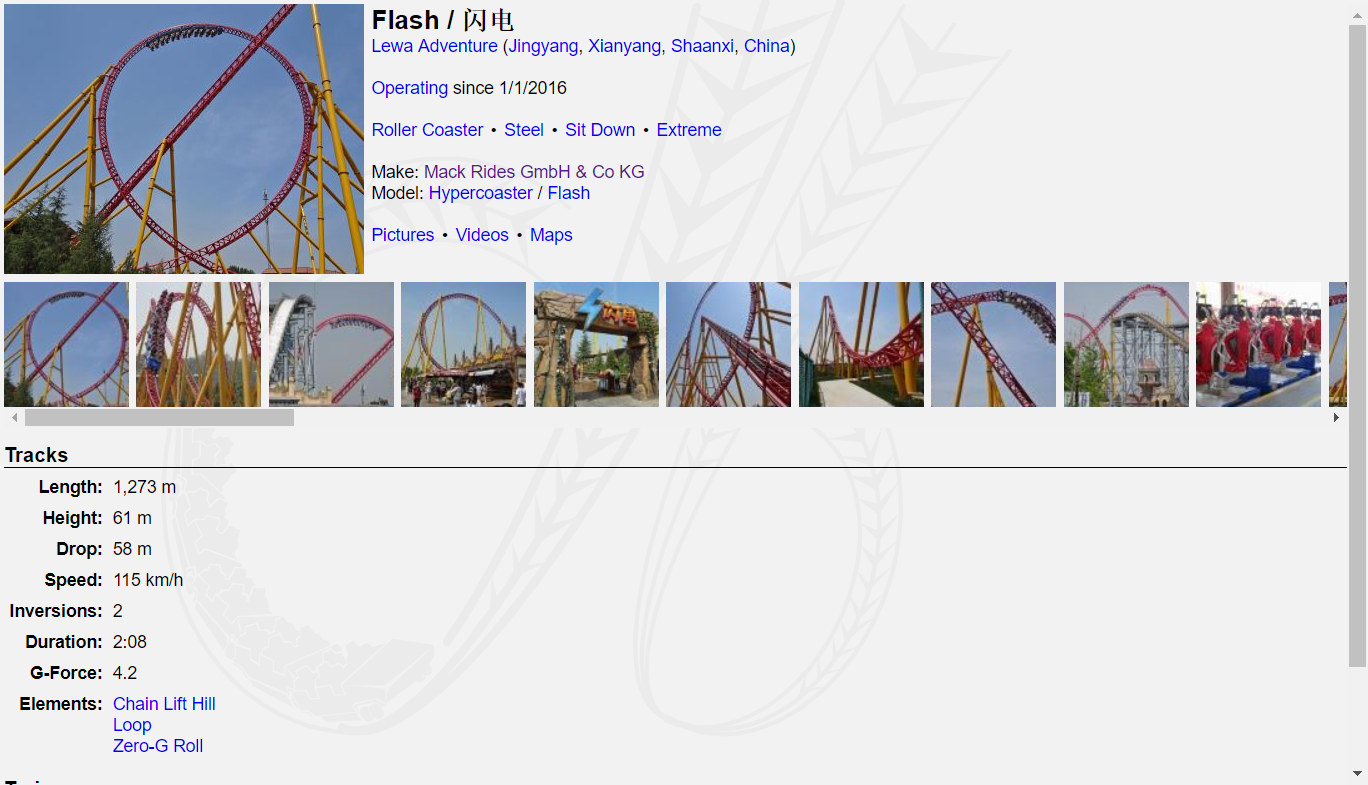 Wouldn't be surprised if they got the drop and height stats mixed up on this though and it does end up being a Flash clone. The speed converted to m/s matches up as well.

EDIT: Beaten to it by seconds by @Lofty