Just a reminder; if you want to contribute a list to CF’s favourite German rollercoasters, you’ve got 16 days left! I’m compiling the data we have so far now, and it’s actually working out to be very interesting...

Also, I was thinking of making these polls monthly, with a different country, US state or possibly something else entirely each month! What would you guys think of that? Next month, I was possibly pondering a US poll, so that the American CFers can join in the fun; I was thinking maybe CoasterForce’s Favourite Florida Rollercoasters, to see what the current favourites are before the state gets invaded by VelociCoaster and Iron Gwazi fever in the summer?

Monthly sounds like a good plan for getting submissions in, if anything this one might be open a little long based on the current rate of response.

Right then; it’s 1st May, and I have the results of this poll!

In total, 19 members ranked 37 different roller coasters in their lists, so I had a fair sample size to work with; I was certainly able to work out relatively decent results! Speaking of the results, they’re interesting to say the least... in terms of how I calculated the rankings, I gave each ride a final score, which was calculated by dividing mean ranking by the amount of people who included a ride in their list (in order to take into account the percentage of the site that rates a ride highly); the lower the score, the higher the ride ranks. Also, I should clarify a few things; for Winjas, I was unsure what to do, as some people bunged them together and some people didn’t. To make things a bit simpler, I did end up bunging Winjas together and just going with your highest Winjas ranking if you did separate the two rides. Also, I inserted rides in in the order that you wrote them down. If there were less than 10 in your list, I just left the boxes after the end of your list blank. If there were more than 10 in your list, I did cut it off at 10, I’m afraid.

So without further ado, here are CoasterForce’s Top 10 German Rollercoasters:
So that’s CF’s top 10 German rollercoasters! I certainly thought the results were quite interesting; Taron being on top wasn’t particularly surprising, but some of what was below surprised me, I’ll admit! It’s also quite a diverse top 10 manufacturers-wise, with 3 Intamins, 3 Gerstlauers, 2 B&Ms, 1 Mack and 1 GCI in the mix! I’d also say that compared to the UK poll I did, there’s a more diverse range of parks seen here; a lot of smaller places are getting a look in here as opposed to being mainly overpowered by the big players like in the UK’s top 10! 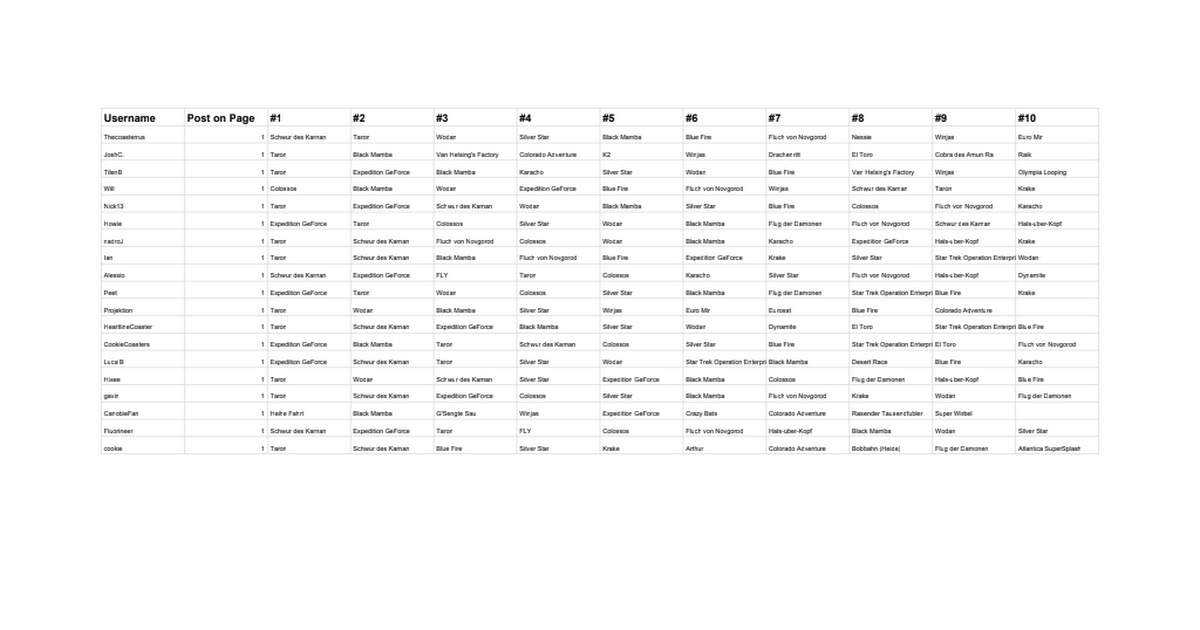 So, that’s that! Thank you all for participating, and I hope you enjoyed the poll! If you guys want to participate, I’m going to start doing one of these each month; this month’s poll is CoasterForce’s Favourite Florida Rollercoasters, as I thought it was about time I let some of the USA members join in, and I’d be intrigued to know the current favourites in the state before VelociCoaster and Iron Gwazi fever inevitably invades later this year! So stay tuned, as that thread will be coming shortly!

Matt N said:
Right then; it’s 1st May, and I have the results of this poll!
Click to expand...

I'm surprised that the top 6 matches my own almost perfectly (just #2 and #3 are swapped). Also love the power of @CanobieFan's wild card vote breaking through at the bottom there.

Would you take offense if I harvested the data and ran this one through the paired ranking system again, just to see if there are any interesting differences?

HeartlineCoaster said:
Would you take offense if I harvested the data and ran this one through the paired ranking system again, just to see if there are any interesting differences?
Click to expand...

Not at all! In fact, I’d actually be very interested to see how the pair wise algorithm’s verdict compares with that of the algorithm I used, so go ahead, if you wish!

HeartlineCoaster said:
Also love the power of @CanobieFan's wild card vote breaking through at the bottom there.
Click to expand...

Haha, the advantages of having only ridden 10 German coasters? My experience is somewhat limited there and I've not been in the country since 2007! That being said, Heiße Fahrt was fun as hell and I power-rode it in the few hours I had at the park <3

I'd love to make it to Europa (was sooo close to getting there in 2017 via Paris....) and Hansa/Heide would be on the to-do list as well.

As with the UK poll I removed everything that only had one entry to smooth things out a bit.
This brings FLY into the picture, though it only had 2 appearances over Heiße Fahrt's 1.
Unlike last time not even all of the top ten had a win rate over 50%, which shows that it's just the same names kicking around in every list.

I think most interesting of all for me here was that Taron tied with Expedition GeForce 7 - 7 in their head to head. Taron wasn't quite as untouchable as Nemesis was in the UK poll.

HeartlineCoaster said:
I think most interesting of all for me here was that Taron tied with Expedition GeForce 7 - 7 in their head to head. Taron wasn't quite as untouchable as Nemesis was in the UK poll.
Click to expand...