The noise from the brakes could just be down to them still being worn in. Rain as well might be a factor.

Yeah I was just gonna say I think that's what the noise is. Sounds like the screech if from the train entering the drive tyres too fast after the brakes. I am watching the hill with the trim brackets very closely.

This all looks too good to be true. Fully expecting a trim brake to be whacked on that first hill in the coming days.

I think some of the newer POVs are slower because it’s showing the second train testing, which hasn’t really broken in its wheels and is probably running a lot slower than the first train (not to mention its extremely cold and cloudy over there).

A ton of great photos from Theme park magic showing the coaster and the parks progress on landscaping and theming. This coaster would be something special without all this extra work, this amazing theming is the cherry on top. Also I think once it’s fully tested and your sat on it, it will not feel slow.

The name of the children ride is now also known: Kondaala, the only name yet to be announced is the name of this new area. Seeing how much Walibi loves the name Kondaa, maybe it will be Kondaa World?

Welcome back to Instagram. Sign in to check out what your friends, family & interests have been capturing & sharing around the world.

Coasterwaffle said:
The name of the children ride is now also known: Kondaala, the only name yet to be announced is the name of this new area. Seeing how much Walibi loves the name Kondaa, maybe it will be Kondaa World?

Welcome back to Instagram. Sign in to check out what your friends, family & interests have been capturing & sharing around the world.

I don’t mind them re-using the name for the smaller ride, and they’re not the only one doing so (e.g. Red Force / Junior Red Force, Dragon / Dragon’s Apprentice / ...). But I’m sure they’ll go for another name for the area. If they don’t, yeah then it’s a bit lame...

It was meant as a little joke, I don't think they will name the area like that or at least I hope so
Anyway here is a new video of some testruns.

That legit sounds like a B&M going up the lift hill. I love it.

Given that they've been naming their areas '____ World' lately (Exotic World, Karma World, Fun World) to compliment their "Worlds of Walibi" vision set out in 2017, I expect we'll see something similar with the area name (unless they've dropped that idea).

I could see something along the lines of Tribal World perhaps. Or at least that sort of vibe. Then again, I seem to remember rumours that they were going to call Exotic World, featuring Tiki Waka and Tiki Trail, Tiki World... So I guess Kondaa World isn't that out of the question..!

Couldn't make it up! KAPUT

The translation is a bit dodgy but it looks like the chain has snapped? RIP. Hopefully it's not a design flaw that caused the chain to snap this soon in the coaster's life.

CrashCoaster said:
The translation is a bit dodgy but it looks like the chain has snapped? RIP
Click to expand...

yeah can see it loosely dangling at the top of the lift. Oopsies

Dread to think how much that's gonna kostaa

There has been a document which says that the chain didn't snap but came loose from the guiderail. But ofcourse we don't know if that is true or not 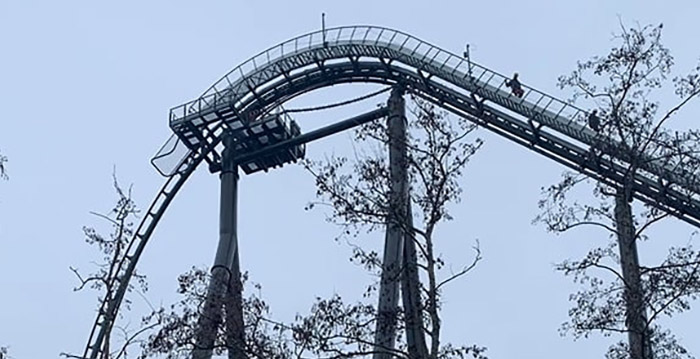 these pictures also show the chain loose from it's guiderail

I like how the chain looks tiny in pictures until there's someone next it, it's hench!